Example of two *correlated* normal variables whose sum is not normal

I am aware of some nice examples of pairs of correlated random variables which are marginally normal but not jointly normal. See this answer by Dilip Sarwate, and this one by Cardinal.

[Context: I have a homework question which asks for the distribution of $aX+bY$ where $X$ and $Y$ are standard normals with correlation $\rho$. I think the question meant to specify that they are bivariate normal. But I am wondering whether anything can be said without this extra assumption for $\rho$ non-zero.]

Almost any bivariate copula will produce a pair of normal random variates with some nonzero correlation (some will give zero but they are special cases). Most (nearly all) of them will produce a non-normal sum.

All but the first two examples in cardinal's plot should give non-normal sums.

Some examples -- the first two are both from the same copula family as the fifth of cardinal's example bivariate distributions, the third is degenerate. 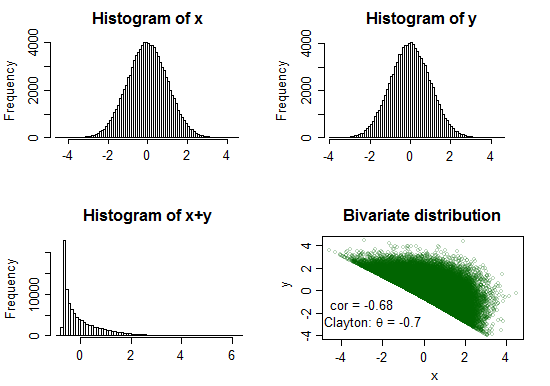 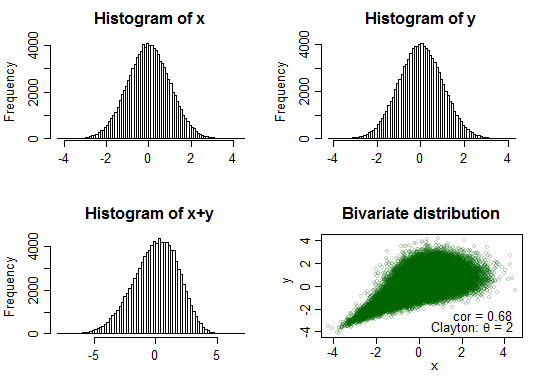 Here the sum is mildly left skew. Just in case that's not quite obvious to everyone, here I flipped the distribution (i.e. we have a histogram of $-(x+y)$ in pale purple) and superimposed it so we can see the asymmetry more clearly:

On the other hand if we just negate one of them, we would change association between the strength of the skewness with the sign of the correlation (but not the direction of it).

It's worth also playing around with a few different copulas to get a sense of what can happen with the bivariate distribution and normal margins.

The Gaussian margins with a t-copula can be experimented with, without worrying much about details of copulas (generate from correlated bivariate t, which is easy, then transform to uniform margins via the probability integral transform, then transform uniform margins to Gaussian via the inverse normal cdf). It will have a non-normal-but-symmetric sum. So even if you don't have nice copula-packages, you can still do some things fairly readily (e.g. if I was trying to show an example quicly in Excel, I'd probably start with the t-copula).

Example 3: (this is more like what I should have started with initially) 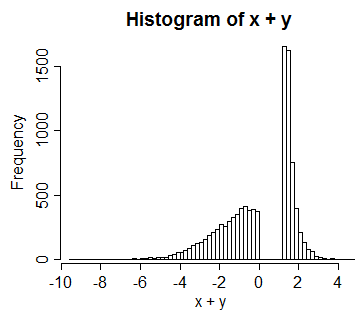 In this case the correlation between them is around 0.66.

So again, $X$ and $Y$ are correlated normals with a (in this case, distinctly) non-normal sum -- because they're not bivariate normal.

Code for the the third example:

I came up with one example. X is standard normal variable, and Y=-X. Then X+Y=0, which is constant. Can anyone confirm it's a counterexample?

We know the fact if X,Y are jointly normal, then their sum is also normal. But what if their correlation is -1??

I am a little confused about this. Thx.

Not the answer you're looking for? Browse other questions tagged correlation normal-distribution multivariate-analysis bivariate or ask your own question.

124
Is it possible to have a pair of Gaussian random variables for which the joint distribution is not Gaussian?
4
Same Joint Distribution, different conditional and marginal distribution
2
Are marginals of a jointly Gaussian sequence always Gaussian?
2
Joint probability density function
5
An example of a bivariate distribution with normal marginals and a nonlinear conditional mean curve?
1
Distribution for an operation of variables with identical distributions
2
Why do I need multivariate normality tests?
1
What is the probability that two data points in a normally distributed data set have the same value?
0
Gaussian Distribution
0
If I have two random variables, $X_1, X_2 \sim N(\mu, \sigma^2)$, what can I say about $X_1-X_2$?
See more linked questions