Solving a scrambled image puzzle with a genetic algorithm

I want to solve a puzzle such as this one: 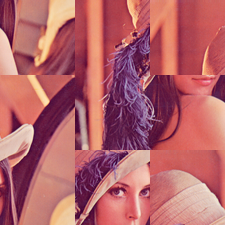 What crossover operator would you say is suitable for this type of problem? I have previously tried simulated annealing and have observed that pieces often correctly become each other's neighbors, but are in the wrong place in the image as a whole. Is there a crossover operator that can move such correct groups?

Are there any other considerations regarding the configuration of a genetic algorithm for this problem that comes to mind?

You have many subimages of an image. They are all squares of the same size (pixels by pixels). No connectivity is provided in the metadata or file ordering.

We are going to assume that when two edges match the error between them is zero, or has an absolute value of error that is sufficiently smaller than all other "matching errors" such that it can be clamped to zero.

We are also going to assume that no two non-contacting edges are identical.

We are going to assume that the images are not a trivial case. They are all uniformly the same color, for example.

We are going to assume that they are all facing the proper way, that they have not been "flipped".

The proper placement of edges such that the original (whole) image is re-assembled. Failing that, assemble as much of the whole image as possible.

Make a hash of edges:

As someone who has played many delightful games of boxes and dots with my younger siblings, cousins, nephews and nieces my intuition tells me that there are at least two parts of the game. The first is where you partition the general space into sub-blocks that are discontiguous in a way that gives enough choice that you can force your opponent into low-capture-size partitions while taking high capture-size partitions. The second is in actually taking those partitions and capturing as many individual boxes. This problem is that game in reverse. After some portion of the edge-matching process is complete, say 60% of the total number of edges, has been set then the transition to "endgame" can occur. In relation to "puzzle" metaphor - it is where you have big enough chunks and you look to tie them together. Majoring on connecting edge pieces will allow you to combine networks, and in one or two edge-matches can lock down many remaining image locations with regards to that first one. After the nodes are "connected enough" in terms of random subnets it becomes prudent to look only at net-edges and try to relate them to other net-edges.