What is a log-odds distribution?

I am reading a textbook on machine learning (Data Mining by Witten, et al., 2011) and came across this passage:

P.S. I am a software engineer, not a statistician.

why does it help with numbers bounded above and below?

what is this distribution ... ?

The term 'log-odds distribution' is, unfortunately, not completely standard (and not a very common term even then).

I'll discuss some possibilities for what it might mean. Let's start by considering a way to construct distributions for values in the unit interval.

So, for example, the log-odds transformation $Y=\log(\frac{P}{1-P})$ (also called the logit) would be one such inverse-cdf transformation (being the inverse CDF of a standard logistic), and then there are many distributions we might consider as models for $Y$.

We might then use (for example) a logistic$(\mu,\tau)$ model for $Y$, a simple two-parameter family on the real line. Transforming back to $(0,1)$ via the inverse log-odds transformation (i.e. $P=\frac{\exp(Y)}{1+\exp(Y)}$) yields a two parameter distribution for $P$, one that can be unimodal, or U shaped, or J shaped, symmetric or skew, in many ways somewhat like a beta distribution (personally, I'd call this logit-logistic, since its logit is logistic). Here are some examples for different values of $\mu,\tau$: 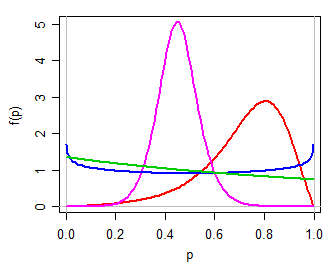 Looking at the brief mention in the text by Witten et al, this might be what's intended by "log-odds distribution" - but they might as easily mean something else.

Another possibility is that the logit-normal was intended.

However, the term seems to have been used by van Erp & van Gelder (2008)$^{[1]}$, for example, to refer to a log-odds transformation on a beta distribution (so in effect taking $F$ as a logistic and $G$ as the distribution of the log of a beta-prime random variable, or equivalently the distribution of the difference of the logs of two chi-square random variables). However, they are using this to do model count proportions, which are discrete. This of course, leads to some problems (caused by trying to model a distribution with finite probability at 0 and 1 with one on $(0,1)$), which they then seem to spend a lot of effort on. (It would seem easier to just avoid the inappropriate model, but maybe that's just me.)

* again, this has the problem that if $P$ is exactly 0 or 1, the value of $Y$ will be $-\infty$ or $\infty$ respectively ... which suggests we must bound the distribution away from 0 and 1 to use it for this purpose.

The dissertation by Yan Guo (2009)$^{[2]}$ uses the term to refer to a log-logistic distribution, a right-skew distribution on the real half-line.

So as you see, it's not a term with a single meaning. Without a clearer indication from Witten or one of the other authors of that book, we're left to guess what is intended.

I'm a software engineer (not a statistician) and I recently read a book called An Introduction to Statistical Learning. With applications in R.

I think what you're reading about is log-odds or logit. page 132

Brilliant book - I read it from cover to cover. Hope this helps

Not the answer you're looking for? Browse other questions tagged machine-learning distributions or ask your own question.

12
Distribution of a logit transform of a normal variable