If 'correlation doesn't imply causation', then if I find a statistically significant correlation, how can I prove the causality?

A very likely reason for 2 variables being correlated is that their changes are linked to a third variable. Other likely reasons are chance (if you test enough non-correlated variables for correlation, some will show correlation), or very complex mechanisms that involve multiple steps.

To confidently state causation of A -> B, you need an experiment where you can control variable A and do not influence the other variables. Then you measure if the correlation of A and B still exists if you change your variable.

For nearly all practical applications, it is almost not possible to not influence other (often unknown) variables as well, therefore the best we can do is to prove the absence of causation.

In many fields it's common or necessary to run 2 parts of your experiment in parallel, one where the variable A is changed, and a control group where variable A isn't changed, but the experiment is otherwise exactly the same - e.g. in case of medicine you still stick subjects with a needle or make them swallow pills. If the experiment shows correlation between A and B, but not between A and B' (B of the control group), you can assume causation.

There are also other ways to conclude causality, if an experiment is either not possible, or inadvisable for various reasons (morals, ethics, PR, cost, time). One common way is to use deduction. Taking an example from a comment: to prove that smoking causes cancer in humans, we can use an experiment to prove that smoking causes cancer in mice, then prove that there is a correlation between smoking and cancer in humans, and deduce that therefore it's extremely likely that smoking causes cancer in humans - this proof can be strengthened if we also disprove that cancer causes smoking. Another way to conclude causality is the exclusion of other causes of the correlation, leaving the causality as the best remaining explanation of the correlation - this method is not always applicable, because it is sometimes impossible to eliminate all possible causes of the correlation (called "back-door paths" in another answer). In the smoking/cancer example, we could probably use this approach to prove that smoking is responsible for tar in the lungs, because there are not that many possible sources for that.

These other ways of "proving" causality are not always ideal from a scientific point of view, because they are not as conclusive as a simpler experiment. The global warming debate is a great example to show how it's a lot easier to dismiss causation that hasn't yet been proven conclusively with a repeatable experiment.

For comic relief, here's an example of an experiment that's technically plausible, but not advisable due to non-scientific reasons (morals, ethics, PR, cost): 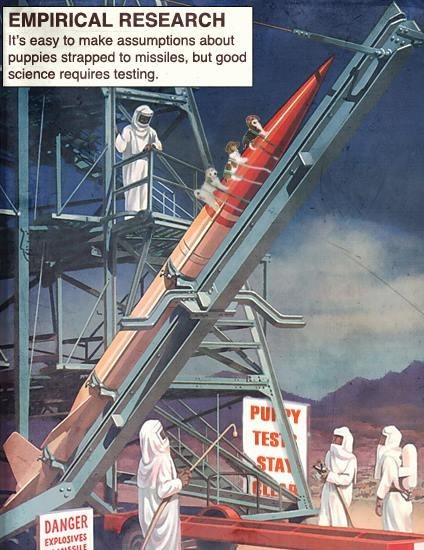 Regardless of whether the design is experimental or observational, an association between a variable A and an outcome Y reflects a causal relationship between A and Y if there are no open backdoor paths between A and Y.

PS You can google for Causal Inference & the following names (to begin with) for more information on the topic: Judea Pearl, Donald Rubin, Miguil Hernan.

If A and B are correlated, and after you excluded coincidence, it is most likely that either A causes B, or B causes A, or some possibly unknown cause X causes both A and B.

The first step would be to examine a possible mechanism. Could you think of how A could case B, or vice versa, or what kind of other cause X could cause both? (This is assuming that this examination is cheaper than performing an experiment trying to prove a cause). You hopefully end up in a position where an experiment to show causation looks worthwhile. You may proceed if you can't think of a mechanism (A causes B but we have no idea why is a possibility).

In that experiment, you need to be able to manipulate the suspected cause at will (for example if the cause is "taking pill A" then some people will get the pill, others won't). Then you take the usual precautions, picking people getting or not getting the pill at random, with neither you nor those tested knowing who got the pill and who didn't. You also try to keep the rest of the experiment equal (giving pill A to people in a nice warm room with sunshine coming through the window while the other group gets a fake pill in a dirty, uncomfortable room just might affect your data). So if you concluded that the only difference is that pill, and the cause for getting or not getting the pill was a random decision that didn't affect anything else, then any correlation can be reasonably declared to be causal.

Intuitively it seems obvious these the metrics should be correlated. More couples (demand) file for more divorces, so more lawyers (supply) raise their prices.

It seems that an increase in divorce rate causes an increase in lawyer income, because the extra demand from the couples caused the lawyers to raise their prices.

Or, is that backwards? What if the lawyers intentionally and independently raised their prices, then spent their new income on divorce advertisements? That also seems like a plausible explanation.

This scenario illustrates the arbitrary number of third, explanatory variables that a statistical analysis can exhibit. Consider the following:

You have a conundrum. You cannot measure every datapoint, if you want to justify ignoring non-explanatory datapoints, you need to measure them. (You can eliminate some datapoints without measuring them, but you need to at least justify them.)

No proof of causation can be correct in an unbounded system.

Interventional (experimental) data as described by gnasher and Peter is the most straightforward way to make a good case for a causal relationship. However, only Ash's answer mentions the possibility of deducing a causal relationship via observational data. In addition to the backdoor method that he mentions, the front door method is another way of establishing causality based on observational data and some causal assumptions. These were discovered by Judea Pearl. I tried to summarize and provide a reference to these here.

To make a causal statement, you need to have both Random Sampling and Random Assignment

Finally, if the effects are visible in the treatment group but not in the control group, then we can establish causation.

Not the answer you're looking for? Browse other questions tagged correlation mathematical-statistics causality or ask your own question.

37
How to resolve Simpson's paradox?
3
Infer causality with high collinearity
2
Under what conditions does correlation imply proximity to causation?