On p38 of Lee and Wagenmakers (2012) "Bayesian Cognitive Modeling: A Practical Course" the following passage appears:

"One of the nice properties of using the θ ~ Beta (α,β) prior distribution for a rate is that it has a natural interpretation. The α and β values can be thought of as counts of, respectively, “prior successes” and “prior failures.” This means that using a θ ~ Beta (3,1) prior corresponds to having the prior information that 4 previous observations have been made, and 3 of them were successes. Or, more elaborately, starting with a θ ~ Beta (3,1) is the same as starting with a θ ~ Beta (1,1), and then seeing data giving two more successes (i.e., the posterior distribution in the second scenario will be same as the prior distribution in the first)."

I'm finding it hard to match that explanation with the following diagram, which I generated using MATLAB. In all instances in the figure the 'b' parameter is three times the size of 'a'. 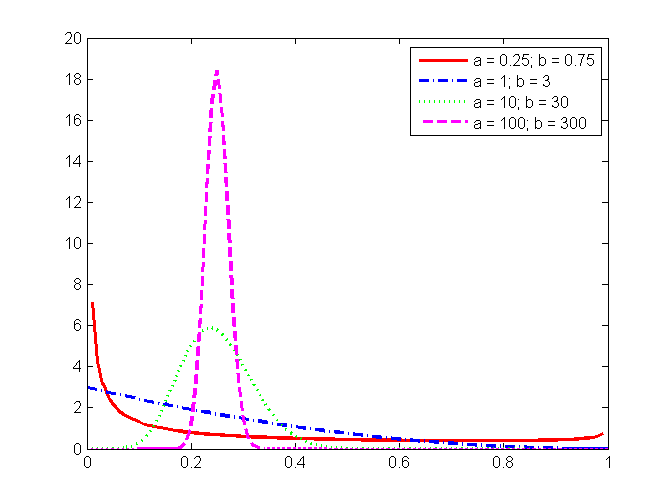 If you add 1,1 to each of the parameter pairs that you graphed, all of the modes will line up as you expect.

Not the answer you're looking for? Browse other questions tagged bayesian beta-distribution or ask your own question.

9
Hypergeometric: how do I construct a credibility interval around K (population successes) in R?
1
P.d.f for Gamma posterior with Exponential data
3
Bernoulli or binomial likelihood, beta prior. Marginalize over success probability
6
What's the intuition for a Beta Distribution with alpha and / or beta less than 1?
4
MLE vs Binomial - Beta conjugate pairs
1
Bayesian priors and probability distributions
2
How to show that the conditional distribution of p|X is a beta distribution if X|p is binomial and the prior for p is uniformly distributed