@DikranMarsupial is exactly right, of course, but it occurred to me that it might be nice to illustrate his point, especially since this concern seems to come up frequently. Specifically, the residuals of a regression model should be normally distributed for the p-values to be correct. However, even if the residuals are normally distributed, that doesn't guarantee that $Y$ will be (not that it matters... ); it depends on the distribution of $X$.

Let's take a simple example (which I am making up). Let's say we're testing a drug for isolated systolic hypertension (i.e., the top blood pressure number is too high). Let's further stipulate that systolic bp is normally distributed within our patient population, with a mean of 160 & SD of 3, and that for each mg of the drug that patients take each day, systolic bp goes down by 1mmHg. In other words, the true value of $\beta_0$ is 160, and $\beta_1$ is -1, and the true data generating function is: $$ BP_{sys}=160-1\times\text{daily drug dosage}+\varepsilon \\ \text{where }\varepsilon\sim\mathcal N(0, 9) $$ In our fictitious study, 300 patients are randomly assigned to take 0mg (a placebo), 20mg, or 40mg of this new medicine per day. (Notice that $X$ is not normally distributed.) Then, after an adequate period of time for the drug to take effect, our data might look like this: 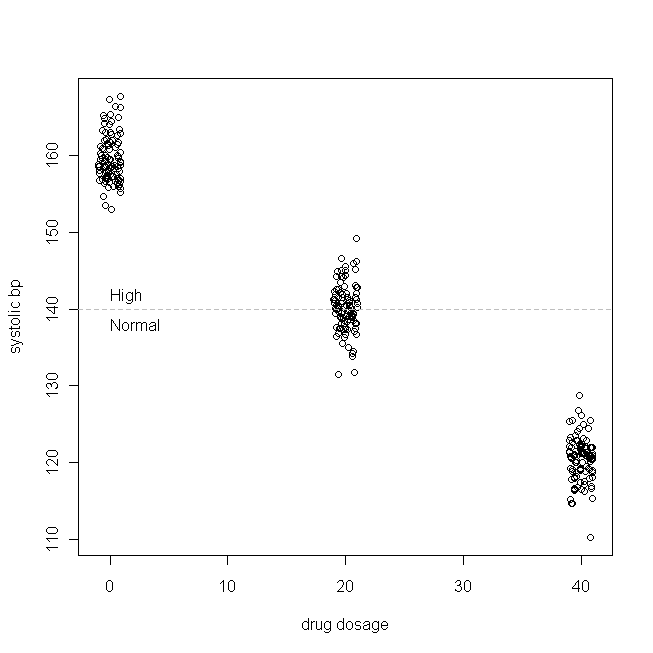 (I jittered the dosages so that the points wouldn't overlap so much that they were hard to distinguish.) Now, let's check out the distributions of $Y$ (i.e., it's marginal / original distribution), and the residuals: 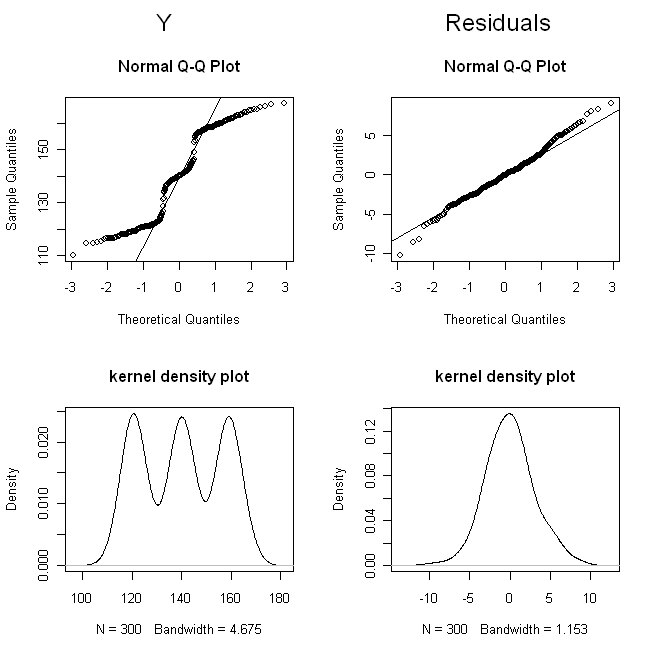 The qq-plots show us that $Y$ is not remotely normal, but that the residuals are reasonably normal. The kernel density plots give us a more intuitively accessible picture of the distributions. It is clear that $Y$ is tri-modal, whereas the residuals look much like a normal distribution is supposed to look.

But what about the fitted regression model, what is the effect of the non-normal $Y$ & $X$ (but normal residuals)? To answer this question, we need to specify what we might be worried about regarding the typical performance of a regression model in situations like this. The first issue is, are the betas, on average, right? (Of course, they'll bounce around some, but in the long run, are the sampling distributions of the betas centered on the true values?) This is the question of bias. Another issue is, can we trust the p-values we get? That is, when the null hypothesis true, is $p<.05$ only 5% of the time? To determine these things, we can simulate data from the above data generating process and a parallel case where the drug has no effect, a large number of times. Then we can plot the sampling distributions of $\beta_1$ and check to see if they're centered on the true value, and also check how often the relationship was 'significant' in the null case: 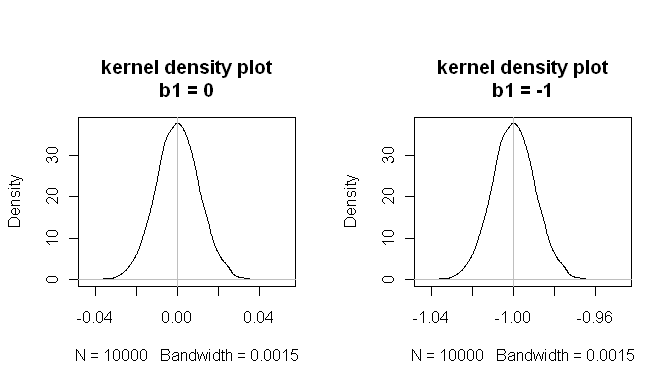 These results show that everything works out fine.

I won't go through the motions, but if $X$ had been normally distributed, with otherwise the same setup, the original / marginal distribution of $Y$ would have been normally distributed just as the residuals (albeit with a larger SD). I also didn't illustrate the effects of a skewed distribution of $X$ (which is was the impetus behind this question), but @DikranMarsupial's point is just as valid in that case, and it could be illustrated similarly.

In a regression model fitting, we should check for the normality of the response at each level of $X$, but not collectively as a whole since it's meaningless for this purpose. If you really need to check the normality of $Y$, then check it for each $X$ level.

Not the answer you're looking for? Browse other questions tagged regression residuals error normality-assumption or ask your own question.

2
How is Y Normally Distributed in Linear Regression
7
Does linear regression assume all variables (predictors and response) to be multivariate normal?
1
Normality test and Outlier detection
0
What is exactly the non-normality requisite for nonparametric tests?
0
panel data model
0
Non-normal data and non-parametric tests
1
Non-normal observations in regression modelling
1
Skewed response variable LM
55
Where does the misconception that Y must be normally distributed come from?
46
How does linear regression use the normal distribution?
See more linked questions