Equivalence between a repeated measures anova model and a mixed model: lmer vs lme, and compound symmetry

I have some trouble obtaining equivalent results between an aov between-within repeated measures model and an lmer mixed model.

My data and script look as follows

Basically, 3 x 6 subjects (id) were subjected to three different FITNESS workout schemes each and their PULSE was measured after carrying out three different types of endurance TESTs.

I then fitted the following aov model :

The result I obtain using

is identical to this.

However, the result I obtain using lme4's lmer is different :

Anybody any thoughts what I am doing wrong with the lmer model? Or where the difference comes from? Could it have to do anything with lmer not allowing negative intraclass corellations or something like that? Given that nlme's gls and lme do return the correct result, though, I am wondering how this is different in gls and lme? Is it that the option correlation=corCompSymm(form=~1|id) causes them to directly estimate the intraclass correlation, which can be either positive or negative, whereas lmer estimates a variance component, which cannot be negative (and ends up being estimated as zero in this case)?

Here is a plot of your dataset. The white dots are the actual observations and the black dots are the subject means. 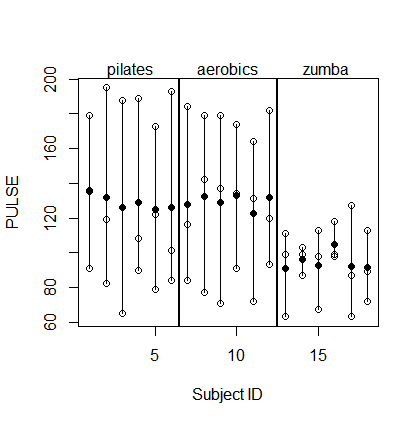 To make things more simple, but without changing the spirit of the problem, I will subtract out the fixed effects (i.e., the FITNESS and TEST effects, as well as the grand mean) and deal with the residual data as a one-way random effects problem. So here's what the new dataset looks like: 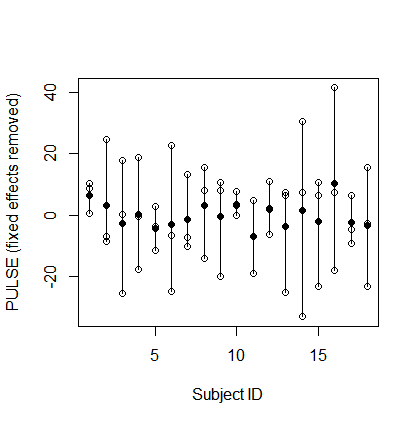 Okay, so here is the problem. The variance component model assumes that each data point is the sum of a subject effect and an error: $y_{ij}=u_j+e_{ij}$, where $u_j$ is the effect of the $j$th subject. So let's think about what would happen if there were truly 0 variance in the subject effects -- in other words, if the true between-subjects variance component were 0. Given an actual dataset generated under this model, if we were to compute sample means for each subject's observed data, those sample means would still have some non-zero variance, but they would reflect only error variance, and not any "true" subject variance (because we have assumed there is none).

So how variable would we expect these subject means to be? Well, basically each estimated subject effect is a mean, and we know the formula for the variance of a mean: $\text{var}(\bar{X})=\text{var}(X_i)/n$, where $n$ is the number of things being averaged. Now let's apply this formula to your dataset and see how much variance we would expect to see in the estimated subject effects if the true between-subjects variance component were exactly 0.

If you want to see how you could actually get the negative variance component estimate implied by your dataset, you can use the procedure that I illustrate (with accompanying R code) in this other recent answer of mine. That procedure is not totally trivial, but not too hard either (for a balanced design such as this one).

Not the answer you're looking for? Browse other questions tagged r anova mixed-model repeated-measures lme4-nlme or ask your own question.

24
Why do lme and aov return different results for repeated measures ANOVA in R?
20
How to choose random- and fixed-effects structure in linear mixed models?
21
Showing that 100 measurements for 5 subjects provide much less information than 5 measurements for 100 subjects
12
What is the lme4::lmer equivalent of a three-way repeated measures ANOVA?
6
Maximal model for linear mixed-effects model for repeated mesaures design
2
Can I use one-way ANOVA instead of repeated measures ANOVA even when data has been collected for all subjects under all the conditions?
1
How do I analyze the treatment effect while controlling for covariates in a pretest–posttest design in R?
1
Different results obtained with lmer() and aov() for three-way repeated-measures experiment