ANOVA-type test but with known population variance of each group

I have a set of $N$ samples $s_{i}$, each one sampled from a normal distribution with standard deviations $\sigma_i$, which are known. I would like to know if the distributions have the same mean.

I think this situation is closely related to ANOVA, but the difference being that I only have one sample per 'group', and that I know the standard deviations of the group exactly.

Under your null hypothesis, the component mixtures all have the same means (for convenience, we can call it $0$). In addition, I gather the proportions are all $1/N$, since you have only one datum from each component. These facts simplify your situation quite a bit. Your data would have an expected variance equal to the sum of the known component variances. On the other hand, if the means vary then the variance of the component means can add considerably to the variance of your mixture.

Thus, you simply need to test if the variance of your data is greater than the sum of the known component variances. This can be done with a chi-squared test (see @Glen_b's anwer here: Why is the sampling distribution of a variance chi-squared?).

Here is a quick R demo: First I simulate the null hypothesis and show its distribution. Then I generate data where the null hypothesis is false and show the test. The data are three points drawn from normal distributions with means equal to $0$ (or they could have been anything else, so long as they are the same) and variances equal to $4$, $6$, and $8$. Thus the resulting mixture distribution variance is $18$. In this case there are three data points, so you have $2$ degrees of freedom. 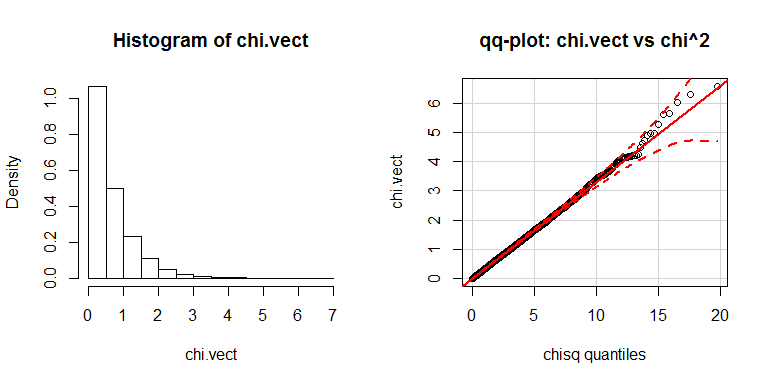 The qqplot gung has provided appears correct. But the plotted points do not closely follow y = x! This should be the case if the distribution was actually chi-squared. Here's a qqplot including the line y=x generated from the following code (adapted from gung's answer): 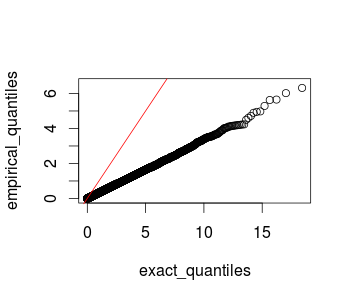 Not the answer you're looking for? Browse other questions tagged hypothesis-testing anova variance small-sample gaussian-mixture-distribution or ask your own question.

28
How to perform Student's t-test having only sample size, sample average and population average are known?
2
Is the variance of each group unknown in one-way ANOVA?
5
Power analysis for post hoc test of ANOVA with many groups
12
ANOVA: testing assumption of normality for many groups with few samples per group
1
ANOVA not significant but t-test significant
0
Compare standard devation between different samples?
0
Which hypothesis test would you choose for a test group and a control group, each of which has a measurement outcome at beginning and end of study