Can I test the validity of a prior given data?

I am writing an R function that performs a Bayesian analysis to estimate a posterior density given an informed prior and data. I would like the function to send a warning if the user needs to reconsider the prior.

In this question, I am interested in learning how to evaluate a prior. Previous questions have covered the mechanics of stating informed priors ( here and here.)

The following cases might require that the prior be re-evaluated:

In the first case, the priors are usuallystill diffuse enough that the data will generally overwhelm them unless the data values lie in an unsupported range (e.g. <0 for logN or Gamma). The other cases are bugs or errors.

The blue data could be a valid prior + data combination whereas the red data would require a prior distribution that is supported for negative values. 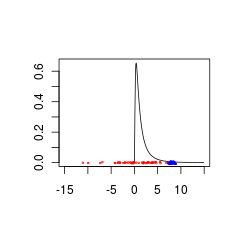 You need to be clear what you mean by "prior". For example, if you are interested in my prior belief about the life expectancy in the UK, that can't be wrong. It's my belief! It can be inconsistent with the observed data, but that's another matter completely.

Also context matters. For example, suppose we are interested in the population of something. My prior asserts that this quantity must be strictly non-negative. However the data has been observed with error and we have negative measurements. In this case, the prior isn't invalid, it's just the prior for the latent process.

To answer your questions,

A purist would argue that your shouldn't use the data twice. However, the pragmatic person would just counter that you hadn't thought enough about the prior in the first place.

2 Is any particular test best suited for this problem?

This really depends on the model under consideration. I suppose at the most basic you could compare prior range with data range.

Not the answer you're looking for? Browse other questions tagged distributions probability bayesian or ask your own question.