How to interpret F- and p-value in ANOVA?

I am new to statistics and I currently deal with ANOVA. I carry out an ANOVA test in R using

My null hypothesis ($H_0$) is that all group means are equal.

There is a lot of information available on how F is calculated, but I don't know how to read an F-statistic and how F and p are connected.

The F statistic is a ratio of 2 different measure of variance for the data. If the null hypothesis is true then these are both estimates of the same thing and the ratio will be around 1.

The numerator is computed by measuring the variance of the means and if the true means of the groups are identical then this is a function of the overall variance of the data. But if the null hypothesis is false and the means are not all equal, then this measure of variance will be larger.

The denominator is an average of the sample variances for each group, which is an estimate of the overall population variance (assuming all groups have equal variances).

So when the null of all means equal is true then the 2 measures (with some extra terms for degrees of freedom) will be similar and the ratio will be close to 1. If the null is false, then the numerator will be large relative to the denominator and the ratio will be greater than 1. Looking up this ratio on the F-table (or computing it with a function like pf in R) will give the p-value.

The best way to think about the relationship between $F$, $p$, and the critical value is with a picture: 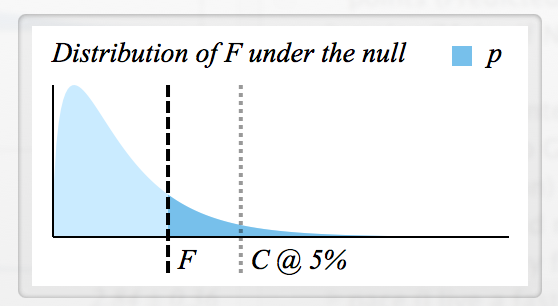 The curve here is an $F$ distribution, that is, the distribution of $F$ statistics that we'd see if the null hypothesis were true. In this diagram, the observed $F$ statistic is the distance from black dashed line to the vertical axis. The $p$ value is the dark blue area under the curve from $F$ to infinity. Notice that every value of $F$ must correspond to a unique $p$ value, and that higher $F$ values correspond to lower $p$ values.

You should notice a couple of other things about the distribution under null hypothesis:

1) $F$ values approaching zero are highly unlikely (this is not always true, but it's true for the curve in this example)

2) After a certain point, the larger the $F$ is, the less likely it is. (The curve tapers off to the right.)

The critical value $C$ also makes an appearance in this diagram. The area under the curve from $C$ to infinity equals the significance level (here, 5%). You can tell that the $F$ statistic here would result in a failure to reject the null hypothesis because it is less than $C$, that is, its $p$ value is greater than .05. In this specific example, $p=0.175$, but you'd need a ruler to calculate that by hand :-)

Note that the shape of the $F$ distribution is contingent on its degrees of freedom, which for ANOVA correspond to the # of groups (minus 1) and # of observations (minus the # of groups). In general, the overall "shape" of the $F$ curve is determined by the first number, and its "flatness" is determined by the second number. The above example has a $df_1 = 3$ (4 groups), but you'll see that setting $df_1 = 2$ (3 groups) results in a markedly different curve: 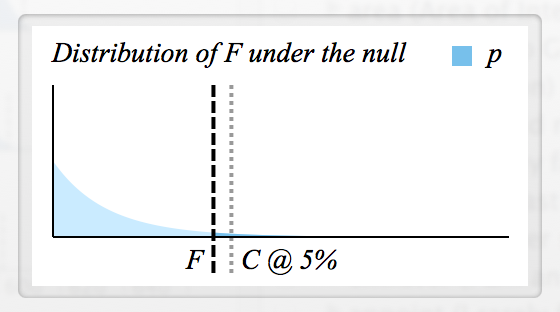 You can see other variants of the curve on Mr. Wikipedia Page. One thing worth noting is that because the $F$ statistic is a ratio, large numbers are uncommon under the null hypothesis, even with large degrees of freedom. This is in contrast to $\chi^2$ statistics, which are not divided by the number of groups, and essentially grow with the degrees of freedom. (Otherwise $\chi^2$ is analogous to $F$ in the sense that $\chi^2$ is derived from normally distributed $z$ scores, whereas $F$ is derived from $t$-distributed $t$ statistics.)

That's a lot more than I meant to type, but I hope that covers your questions!

(If you're wondering where the diagrams came from, they were automatically generated by my desktop statistics package, Wizard.)

Not the answer you're looking for? Browse other questions tagged r anova interpretation or ask your own question.

1
Interpret F-Value in ANOVA
0
what mean a p-value above 0.05 doing an ANOVA?
10
What question does ANOVA answer?
5
How to interpret ANOVA output when comparing two nested mixed-effect models?
5
What is an F test?
8
Anova from R output interpretation

6
How to find P(X > F) in ANOVA F-test?
14
F statistic, F-critical value, and P-value
2
Rejecting Null Too Frequently in Poisson GLMM (lme4, glmmPQL, glmmadmb)
1
Statistical significance in time series (R)
2
ANOVA test p-value interpretation
1
Is it possible to use a normal copula after the Johnson transformation?
2
What are the appropriate ANOVA and classification methods to use for this data set?