Is there an elegant/insightful way to understand this linear regression identity for multiple $R^2$?

But the only proof I know is not in anyway constructive or insightful (see below), and yet to look at it it feels like it should be readily understandable.

None of these threads seem to lead anywhere for me. Can anyone provide a clear explanation of how to understand this result.

The following three formulas are well known, they are found in many books on linear regression. It is not difficult to derive them.

Here is a geometric "insight". Below are two pictures showing regression of $Y$ by $X_1$ and $X_2$. This kind of representation is known as variables-as-vectors in subject space (please read what it is about). The pictures are drawn after all the three variables were centered, and so (1) every vector's length = st. deviation of the respective variable, and (2) angle (its cosine) between every two vectors = correlation between the respective variables. 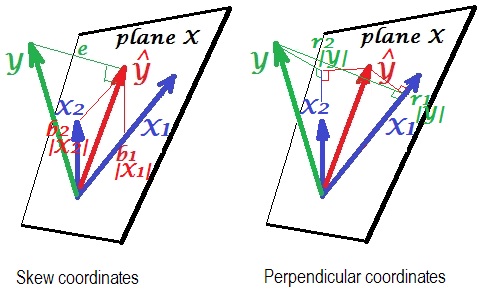 So far it were general explanations of linear regression vector representation. Now we turn for the task to show how it may lead to $R^2 = r_1 \beta_1 + r_2 \beta_2$. 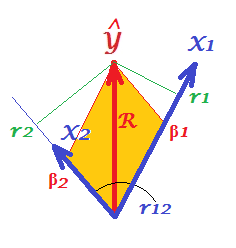 This same thing is true for any number of predictors X. Unfortunately, it is impossible to draw the alike pictures with many predictors.

The hat matrix is idempotent.

(This is a linear-algebraic way of stating that OLS is an orthogonal projection of the response vector onto the space spanned by the variables.)

Recall that by definition

is the sum of squares of the (centered) predicted values and

is the sum of squares of the (centered) response values. Standardizing $Y$ beforehand to unit variance also implies

Recall, too, that the estimated coefficients are given by

where $H$ is the "hat matrix" effecting the projection of $Y$ onto its least squares fit $\hat Y$. It is symmetric (which is obvious from its very form) and idempotent. Here is a proof of the latter for those unfamiliar with this result. It's just shuffling parentheses around:

The crucial move in the middle used the idempotence of the hat matrix. The right hand side is your magical formula because $\frac{1}{n}Y^\prime X$ is the (row) vector of correlation coefficients between $Y$ and the columns of $X$.

Not the answer you're looking for? Browse other questions tagged regression linear-model r-squared proof or ask your own question.

83
How to visualize what canonical correlation analysis does (in comparison to what principal component analysis does)?
36
X and Y are not correlated, but X is significant predictor of Y in multiple regression. What does it mean?
25
Least Squares Regression Step-By-Step Linear Algebra Computation
39
How does Factor Analysis explain the covariance while PCA explains the variance?
31
Geometric interpretation of multiple correlation coefficient $R$ and coefficient of determination $R^2$
45
Multiple regression or partial correlation coefficient? And relations between the two
12
Intuition behind $(X^TX)^{-1}$ in closed form of w in Linear Regression
11
Data space, variable space, observation space, model space (e.g. in linear regression)
4
regression with multiple independent variables vs multiple regressions with one independent variable
8
Does the first principal component differ from simply computing the mean of all variables?
See more linked questions