The Welch t-test for unequal variances (also known as Welch–Satterthwaite or Welch-Aspin) generally has a non-integer degrees of freedom. How should these degrees of freedom be quoted when reporting the results of the test?

"It is conventional to round down to the nearest integer before consulting standard t tables" according to various sources* - which makes sense as this direction of rounding is conservative.** Some older statistical software would do this too (e.g. Graphpad Prism before version 6) and some online calculators still do. If this procedure had been used, reporting the rounded-down degrees of freedom seems appropriate. (Though using some better software might be even more appropriate!)

But the vast majority of modern packages make use of the fractional part so in this case it seems the fractional part should be quoted. I can't see it being appropriate to quote to more than two decimal places, as a thousandth of a degree of freedom would only have negligible impact on the p-value.

Looking around Google scholar, I can see papers quoting the df as a whole number, with one decimal place, or with two decimal places. Are there any guidelines on how much accuracy to use? Also, if the software used the full fractional part, should the quoted df be rounded down to the desired number of figures (e.g. $7.5845... \rightarrow 7.5$ to 1 d.p. or $\rightarrow 7$ as a whole number) as was appropriate with the conservative calculation, or as seems more sensible to me, rounded conventionally (to the nearest) so that $7.5845... \rightarrow 7.6$ to 1 d.p. or $\rightarrow 8$ to the nearest whole?

Edit: aside from knowing the most theoretically sound way of reporting non-integer df, it would also be good to know what people do in practice. Presumably journals and style guides have their own requirements. I would be curious what influential style guides like the APA require. From what I can discern (their manual is not freely available online), the APA have a general preference that almost everything should appear to two decimal places, except p-values (which may be two or three d.p.) and percentages (rounded to the nearest percent) - that covers regression slopes, t statistics, F statistics, $\chi^2$ statistics and so on. This is quite illogical, bearing in mind that the second decimal place occupies a very different significant figure, and suggests quite different precision, in 2.47 than in 982.47, but might explain the number of Welch df with two decimal places I saw in my unscientific sample.

$**$ Though the Welch-Satterthwaite approximation itself may or may not be conservative, and in a case where it is not conservative, rounding down the degrees of freedom is no guarantee of compensating overall.

I have not studied actual practice, so this reply cannot address that aspect of the question. As a general principle I would expect the treatment of significant digits in reporting the degrees of freedom (df) to be based on judgment related to significant figures.

The principle is to be consistent: use the precision in one quantity that is appropriate for the precision used in another one that is related to it. Specifically, when reporting values $x$ and $y=f(x)$ when $x$ is given to the nearest multiple of a small value $h$ (such as $h=\frac{1}{2}\times 10^{-6}$ for six places after the decimal point), the relative precision in $y$ as mediated by the function $f$ is

The approximation applies when $f$ is continuously differentiable on the interval $[x-h, x+h]$.

where $t$ is the Welch-Satterthwaite statistic and $F_\nu$ is the CDF of the Student $t$ distribution with $\nu$ degrees of freedom.

For relatively high df $\nu$, often a change in the first decimal place would not change the p-value at all (to the level of precision reported), so rounding to an integer is fine ($h=1/2$ but $h|\frac{d}{dx}f(x)|$ is very small). For very low df and extreme values of the statistic $t$, the magnitude of the derivative $|\frac{\partial}{\partial\nu}F_\nu(t)|$ can exceed $0.01$, suggesting in such cases that $\nu$ should be reported to only one less decimal place than $p$ itself.

See for yourself with this labeled contour plot of the magnitude of the derivative for the lowest (reasonable) df and ranges of $|t|$ that would be of interest (because they can lead to low p-values). 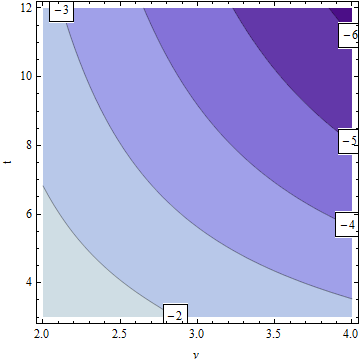 The light blue areas, for the largest $k$, are the ones of concern, because they show where small changes in $\nu$ have the greatest effects on the p-value. 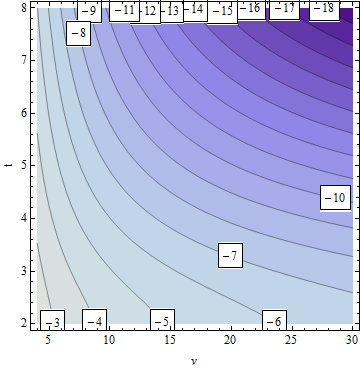 The influence of $\nu$ on the precision of $p$ quickly wanes as $\nu$ increases.

The reason that was a convention is because tables don't have noninteger df. There's no reason to do it otherwise.

which makes sense as this adjustment is conservative.

(by interpolation or by actually crunching the numbers for the t-distribution with that df?)

p-values from t-distributions (applying the cdf to a t-statistic) can be computed by a variety of pretty accurate approximations, so they're effectively calculated rather than interpolated.

Are there any guidelines on how much accuracy to use?

One possibility might be to investigate how accurate the Welch-Satterthwaite approximation for the p-value is in that general region of variance ratios and not quote substantially more relative accuracy than that would suggest was in the d.f. (keeping in mind that the df on the chi-squared in the square of the denominator are just giving an approximation to something that isn't chi-squared anyway).

Not the answer you're looking for? Browse other questions tagged t-test degrees-of-freedom reporting or ask your own question.

17
Explanation for non-integer degrees of freedom in t test with unequal variances
6
The exact value of Welch's t test degrees of freedom
0
For a two sample t-test, what is the relationship between the p-value and the test statistic?