Taken from Grimmet and Stirzaker:

Show that it cannot be the case that $U=X+Y$ where $U$ is uniformly distributed on [0,1] and $X$ and $Y$ are independent and identically distributed. You should not assume that X and Y are continuous variables.

However this proof does not extend to $X,Y$ being absolutely continuous or singular continuous. Hints/Comments/Critique?

The result can be proven with a picture: the visible gray areas show that a uniform distribution cannot be decomposed as a sum of two independent identically distributed variables.

The essential support of the common distribution of $X$ and $Y$ therefore is $[0,1/2]$ (for otherwise there would be positive probability that $X+Y$ lies outside $[0,1]$). 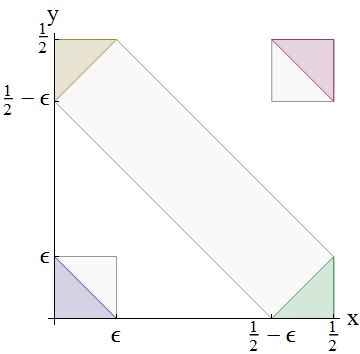 The underlying probability distribution is the joint one for $(X,Y)$. The probability of any event $a \lt X+Y \le b$ is given by the total probability covered by the diagonal band stretching between the lines $x+y=a$ and $x+y=b$. Three such bands are shown: from $0$ to $\epsilon$, appearing as a small blue triangle in the lower left; from $1/2-\epsilon$ to $1/2+\epsilon$, shown as a gray rectangle capped with two (yellow and green) triangles; and from $1-\epsilon$ to $1$, appearing as a small red triangle in the upper right.

What the Picture Shows

By comparing the lower left triangle in the figure to the lower left square containing it and exploiting the iid assumption for $X$ and $Y$, it is clear that

Note that the inequality is strict: equality is not possible because there is some positive probability that both $X$ and $Y$ are less than $\epsilon$ but nevertheless $X+Y \gt \epsilon$.

Similarly, comparing the red triangle to the square in the upper right corner,

Finally, comparing the two opposite triangles in the upper left and lower right to the diagonal band containing them gives another strict inequality,

The first inequality ensues from the previous two (take their square roots and multiply them) while the second one describes the (strict) inclusion of the triangles within the band and the last equality expresses the uniformity of $X+Y$. The conclusion that $2\epsilon \lt 2\epsilon$ is the contradiction proving such $X$ and $Y$ cannot exist, QED.

Rather more interesting is the line of reasoning that got me to that point. $X$ (and $Y$) must be bounded between 0 and 0.5 - that much is obvious, but helpfully means that its moments and central moments exist. Let's start by considering the mean and variance: $\mathbb{E}(U)=0.5$ and $\text{Var}(U)=\frac{1}{12}$. If $X$ and $Y$ are identically distributed then we have:

So $\mathbb{E}(X) = 0.25$. For the variance we additionally need to use independence to apply:

Now, what's the largest standard deviation that a random variable can have if the smallest value it can take is 0, the largest value it can take is 0.5, and the mean is 0.25? Collecting all the probability at two point masses on the extremes, 0.25 away from the mean, would clearly give a standard deviation of 0.25. So our $\sigma_X$ is large but not impossible. (I hoped to show that this implied too much probability lay in the tails for $X + Y$ to be uniform, but I couldn't get anywhere with that on the back of an envelope.)

Second moment considerations almost put an impossible constraint on $X$ so let's consider higher moments. What about Pearson's moment coefficient of skewness, $\gamma_1 = \frac{\mathbb{E}(X - \mu_X)^3}{\sigma_X^3} = \frac{\kappa_3}{\kappa_2^{3/2}}$? This exists since the central moments exist and $\sigma_X \neq 0$. It is helpful to know some properties of the cumulants, in particular applying independence and then identical distribution gives:

This additivity property is precisely the generalisation of how we dealt with the mean and variance above - indeed, the first and second cumulants are just $\kappa_1 = \mu$ and $\kappa_2 = \sigma^2$.

Not the answer you're looking for? Browse other questions tagged probability random-variable continuous-data uniform-distribution proof or ask your own question.