Can I use the correlation between two variables when observations on each variable are autocorrelated?

I have two variables:

Can I use the general correlation such as yielded by cor() in R to measure the correlation between these two variables? If not, which indicator or method can I use?

I have the scatter plot: the horizontal variable is urban area in a specific year, and the vertical variable is another one in that specific year. And these two variables are increasing as years pass. I can see these two variables present a linear relationship. And my purpose is to find a indicator which can measure this linear relationship. I actually have tested the linear regression: the urban area as independent variable, the protected area as dependent variable, and I put 14 pairs of each year into the regression model, and the coefficients can pass the t-test, and model can pass the t-test, the $R^2$ can reach more than 0.9.

I want to use some correlation analysis to solve the first question, such as correlation, linear regression or MIC value. However, because my data are time series, I'm not sure it can be used in the calculation of correlation? So I raise this question. In addition, I don't know other methods that could be used to measure strength of linear relationship between two time series. 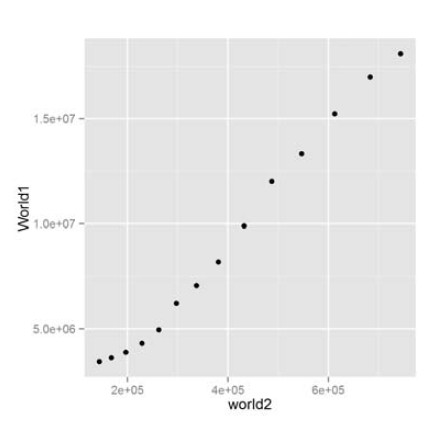 You can certainly calculate the correlation between two time series. That's a short answer.

When, as true here and as true often, there is a marked trend in both cases, the correlation is likely to be extremely high. In general, it's not especially helpful. It's not as if there was serious doubt that there would be an apparent association; that's easily imagined from looking at the graphs of time series and thinking about the corresponding scatter plot. The P-value from conventional calculations is certainly not applicable, as independence of observations clearly does not hold.

The correlation throws absolutely no light on questions of process or causation. It's just a descriptive measure of strength of linear association.

What appear to be the same or similar data as in the question appear at How to interpolate a variable with frequency of 5 years to annual data? As an exercise I calculated the correlation between the variables parea and urea there as 0.9957; and between their logarithms as 0.9911.

In fact, many of the classic examples of high but spurious correlations arise from situations where two time series both show marked trends, but for quite different reasons, including apocryphally the price of rum and the number of Methodist ministers. Here there seems likely to be substantive association, but that's not the main question.

It appears that you have a case for either difference or trend model here. The difference model would be like this $y_t-y_{t-1}=f(x_t)+\varepsilon_t$, where $x_t$ - exogenous variables and $\varepsilon_t$ is random errors.

There are many variations on these models, such as log transforms etc. If you think that volatility of your data is increasing with levels then log-transform may work well.

In this case the correlation will come from the $f_i(.)$ terms, where $i$ is a variable, and from $\varepsilon_{it}$ terms. The first is a correlation from exogenous factors, the second is from random errors.

Not the answer you're looking for? Browse other questions tagged r time-series correlation granger-causality or ask your own question.

0
How to interpolate a variable with frequency of 5 years to annual data?
3
How to test for Pearson correlation when one variable is arbitratily fixed for number of cases?