What are the advantages of ReLU over sigmoid function in deep neural networks?

The state of the art of non-linearity is to use rectified linear units (ReLU) instead of sigmoid function in deep neural network. What are the advantages?

I know that training a network when ReLU is used would be faster, and it is more biological inspired, what are the other advantages? (That is, any disadvantages of using sigmoid)?

Two additional major benefits of ReLUs are sparsity and a reduced likelihood of vanishing gradient. But first recall the definition of a ReLU is $h = \max(0, a)$ where $a = Wx + b$.

One major benefit is the reduced likelihood of the gradient to vanish. This arises when $a > 0$. In this regime the gradient has a constant value. In contrast, the gradient of sigmoids becomes increasingly small as the absolute value of x increases. The constant gradient of ReLUs results in faster learning.

Just complementing the other answers:

The down side of this is that if you have many layers, you will multiply these gradients, and the product of many smaller than 1 values goes to zero very quickly.

Since the state of the art of for Deep Learning has shown that more layers helps a lot, then this disadvantage of the Sigmoid function is a game killer. You just can't do Deep Learning with Sigmoid.

On the other hand the gradient of the ReLu function is either $0$ for $a < 0$ or $1$ for $a > 0$. That means that you can put as many layers as you like, because multiplying the gradients will neither vanish nor explode.

An advantage to ReLU other than avoiding vanishing gradients problem is that it has much lower run time. max(0,a) runs much faster than any sigmoid function (logistic function for example = 1/(1+e^(-a)) which uses an exponent which is computational slow when done often). This is true for both feed forward and back propagation as the gradient of ReLU (if a<0, =0 else =1) is also very easy to compute compared to sigmoid (for logistic curve=e^a/((1+e^a)^2)).

Although ReLU does have the disadvantage of dying cells which limits the capacity of the network. To overcome this just use a variant of ReLU such as leaky ReLU, ELU,etc if you notice the problem described above.

The main reason why ReLu is used is because it is simple, fast, and empirically it seems to work well.

Since then, we've accumulated more experience and more tricks that can be used to train neural networks. For instance, batch normalization is very helpful. When you add in those tricks, the comparison becomes less clear. It is possible to successfully train a deep network with either sigmoid or ReLu, if you apply the right set of tricks.

I suspect that ultimately there are several reasons for widespread use of ReLu today:

Main benefit is that the derivative of ReLu is either 0 or 1, so multiplying by it won't cause weights that are further away from the end result of the loss function to suffer from the vanishing gradient problem: 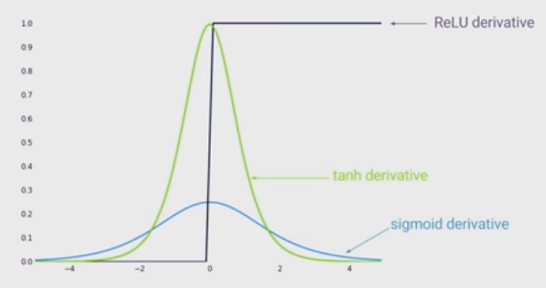 I read all the answers and still feel that I need to write a new one.

Let us consider a linear activation function g(z)=z, which is different from Relu(z) only in the region z<0. If all activation functions used in a network is g(z), then the network is equivalent to a simple single layer linear network, which we know is not useful in learning complicate patterns. We need to introduce nonlinearity into the network. So the interesting part of Relu(z) is actually its combination of this linear part with another linear part that has a different slope (specifically, zero in Relu). This introduces a nonlinearity we need, which seems to be the most simple nonlinearity that one can think of.

However simplicity itself does not imply superiorness over complexity in terms of its practical use.

Then why is this simple nonlinearity more powerful than the sigmoid function?

Both relu and sigmoid have regions of zero derivative. Other anwsers have claimed that relu has a reduced chance of encountering the vanishing gradient problem based on the facts that (1) its zero derivative region is narrower than sigmoid and (2) relu's derivative for z>0 is equal to one, which is not damped or enhanced when multiplied.

Other possible reasons for the advantage of relu over sigmoid may be that (1) Relu has larger possible range than that of the sigmoid function for z>0. (2) The exact zero values of relu for z<0 introduce sparsity effect in the network, which forces the network to learn more robust features. If this is true, something like leaky Relu, which is claimed as an improvement over relu, may be actually damaging the efficacy of Relu.

Not the answer you're looking for? Browse other questions tagged machine-learning neural-networks sigmoid-curve or ask your own question.