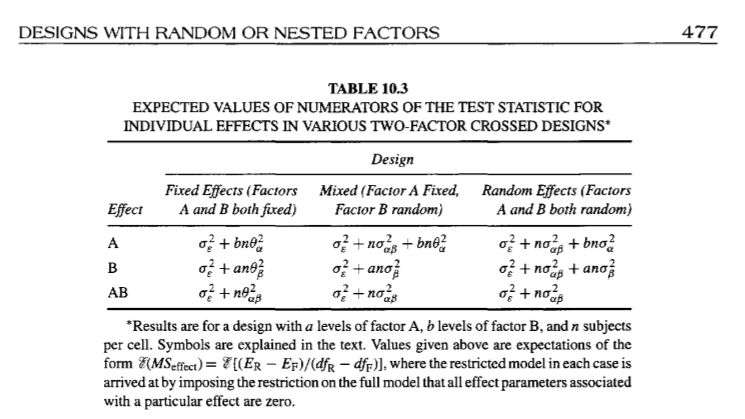 Am I missing something or is this an error in SPSS's reporting?

I had also posted this on the SPSSX listserv and got the following link from a response by Bruce Weaver:

I've had a few questions from users about expected mean squares and error terms in GLM. In particular, with a two way design with A fixed and B random, many people are expecting to see the A term tested against A*B and B tested against the within cells term. In the model used by GLM, the interaction term is automatically assumed to be random, expected mean squares are calculated using Hartley's method of synthesis, and the results are not as many people are used to seeing. In this case, both A and B are tested against A*B. Here's some information that people may find useful.

It would appear that there's something of a split among statisticians in how to handle models with random effects. Quoting from page 12 of the SYSTAT DESIGN module documentation (1987):

There are two sets of distributional assumptions used to analyze a two factor mixed model, differing in the way interactions are handled. The first, used by SAS (1985, p. 469-470), can be traced to Mood (1950). Interaction terms are assumed to be a set of i.i.d. normal random variables. The second, used by DESIGN, is due to Anderson and Bancroft (1952). They impose the constraint that the interactions sum to zero over the levels of fixed factor within each level of the random factor.

On the other side, Searle (1971) states: "The model that leads to [Mood's results] is the one customarily used for unbalanced data."

Statisticians have divided themselves along the following lines:

Not the answer you're looking for? Browse other questions tagged anova spss or ask your own question.