Does a best fit make sense in this case?

I have collected data from 60 candidates, 30 female and 30 male, measuring their pain tolerance, or rather time able to withstand pain. I have plotted the times against the $n$th candidate: 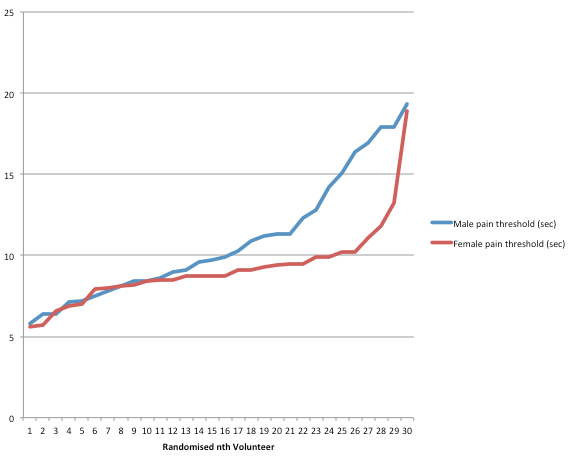 Would it make sense to compute curves of best fit? My research focus is on comparing the tolerance of males and females. I do not think it would make sense for this graph since there is no relation between the candidate number and time.

The main thing this graph does is make me suspicious of your randomization.

If your goal is to compare male and female tolerance for pain graphically, you could use either overlaid density plots or parallel boxplots or given that you have 30 men and 30 women, parallel strip plots.

If you want to compare them statistically then a t-test is a place to start - this compares the means; but you might also want to compare quantiles, in which case quantile regression might be useful (although your N is a bit small).

(This answer takes an optimistic view that "randomised $n$th volunteer" is a strange way of referring to values sorted in magnitude.)

If you've ordered values by magnitude, as appears, this is a standard plot in statistical graphics often known as a quantile plot. Some would say it's a cumulative distribution plot with axes interchanged. Quantile plots rarely appear in introductory courses or texts, but in my view they are neglected; just as box plots and stem-and-leaf plots are often oversold, quantile plots are often undersold (as said, to the point of not appearing at all).

The horizontal scale is proportional to cumulative probability, i.e. fraction $\le$ the given value. Fitting a best fit curve could make perfect sense if you used a theoretical quantile function (a.k.a. inverse cumulative distribution function) of interest.

It's more common to assess fit with a particular distribution (e.g. normal, exponential, gamma) through a quantile-quantile plot of some kind.

In this case, given a focus on the difference between males and females, then a quantile-quantile plot comparing the two groups directly is indicated as a better way to address your research problem.

Here it would be an excellent way to show that the distributions are similar for low thresholds and different for higher thresholds, a fact which makes conventional focus on just comparing means and medians of limited value: the two distributions do not just differ additively.

We don't have your data (if you posted them, we could play), but here is a quantile-quantile plot for ozone concentrations at Yonkers and Stamford. For equal numbers in two groups, the recipe could hardly be simpler: plot

(The idea doesn't depend on groups being equally numerous: for groups with unequal numbers, we need to interpolate between values in the larger group to get values comparable in cumulative probability with those in the smaller group.) 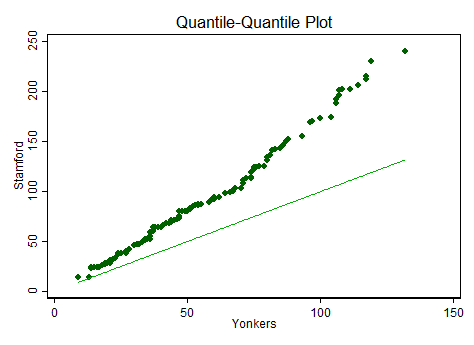 The data come from http://www.stat.purdue.edu/~wsc/visualizing.datatables/ozone In this particular case, they point to logarithmic transformation as the way forward.

More on quantile-quantile plots, with references: Benefits of using QQ-plots over histograms

No, I don't think it makes sense to fit a curve to this data. What would you use the best fit for? You can't really describe or predict anything meaningful from it.

It would make more sense to compare male/female pain tolerances using the mean or median of the two samples. I'd start exploring by making a histogram of the two data sets and see where that leads you.

Not the answer you're looking for? Browse other questions tagged curve-fitting or ask your own question.

22
Benefits of using QQ-plots over histograms

0
What's the best way to fit this very strange-looking data?
1
How to algorithmically determine the best order of fit?
0
Number of points crossed by their best fit line
1
What distribution family would best fit this graph?
0
Multiple comparisons in the process of finding the best-fit curve
1
How to find the best piecewise-smooth fit
0
Finding best fit curve with unknown power