I'm trying to deepen my understand of probability, unions and intersections.

How would you go about finding the probability of x and y ( P(x U y) ??) for a collection of n objects (2 < n < 40) of unique heights, arranged along a line sequentially. Where x is the number of objects visible if you were to look from one direction along the line, and y is the number visible from the opposite direction?

It's a pretty good brain teaser I'm trying to wrap my head around. I wrote some python to help my generate some empirical evidence. I can easily brute force check the number of permutations up to n = 10, but above that permutations are n factorial, which gets large, quickly. So I'm trying to determine the probabilities for X and Y, or even the distinct counts themselves.

To make this question definite and answerable, I interpret it as placing $n$ distinct positive numbers $h_1 \lt h_2 \lt \cdots \lt h_n$ independently and randomly on the Real line at locations $x_1, x_2, \ldots, x_n$. I assume the (common) distribution of these random locations is continuous so that there is zero chance of collision. Finally, the number $h_s$ is "visible" from the left provided all the numbers at locations less than $x_s$ are less than $h_s$, with a similar definition of visibility from the right.

Visibility is determined by the sequence in which the heights are encountered from left to right. All sequences are equally likely (regardless of the actual distribution used to place the heights). The chance there are $t$ visible from the left depends on the location of the largest height, so suppose there are $s-1$ heights to its left (that is, the largest height is located at position $s$ counted from the left). Call this chance $e(t, s)$. We count the maximum height as visible and recursively evaluate $e(t,s)$ in terms of the remaining $s-1$ heights to the left of the maximum,

(This is an example of computing the distribution of a sum of random variables based on their joint distribution.)

The recursion can be implemented directly in many languages. For those that do not support memoization, it's a good idea to cache the values of $e(t,s)$ as they are computed (effectively making it into a dynamic program). Here is an R example.

Here is a partial plot of the distribution stored in p.n: 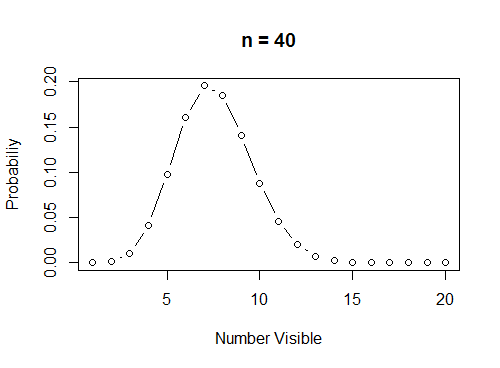