What criteria to use for separating variables into explanatory variables and responses for ordination methods in ecology?

I have different variables that interact within a population. Basically I have been doing an inventory of millipedes and measuring some other values of the terrain, like:

Basically I would like to use PCA to determine which variables drive the variability of the samples and make the forest (environments) different; which variables should I use for "variables" and which ones for "individuals"?

As @amoeba mentioned in the comments, PCA will only look at one set of data and it will show you the major (linear) patterns of variation in those variables, the correlations or covariances between those variables, and the relationships between samples (the rows) in your data set.

What one normally does with a species data set and a suite of potential explanatory variables is to fit a constrained ordination. In PCA, the principal components, the axes on the PCA biplot, are derived as optimal linear combinations of all variables. If you ran this on a data set of soil chemistry with variables pH, $\mathrm{Ca^{2+}}$, TotalCarbon, you might find that the first component was

and the second component

These components are freely selectable from the variables measured, and which get chosen are those that explain sequentially the largest amount of variation in the dataset, and that each linear combination is orthogonal (uncorrelated with) the others.

In a constrained ordination, we have two datasets, but we are not free to select whatever linear combinations of the first data set (the soil chem data above) we want. Instead we have to select linear combinations of the variables in the second data set that best explain variation in the first. Also, in the case of PCA, the one data set is the response matrix and there are no predictors (you could think of the response as predicting itself). In the constrained case, we have a response data set which we wish to explain with a set of explanatory variables.

Although you haven't explained which variables are the response, normally one wishes to explain variation in the abundances or composition of those species (i.e. the responses) using the environmental explanatory variables.

The constrained version of PCA is a thing called Redundancy Analysis (RDA) in ecological circles. This assumes an underlying linear response model for the species, which is either not appropriate or only appropriate if you have short gradients along which the species respond.

An alternative to PCA is a thing called correspondence analysis (CA). This is unconstrained but it does have an underlying unimodal response model, which is somewhat more realistic in terms of how species respond along longer gradients. Note also that CA models relative abundances or composition, PCA models the raw abundances.

In both RDA and CCA the aim is to model the variation in species abundances or composition as a series of linear combinations of the explanatory variables.

From the description it sounds like your wife wants to explain variation in the millipede species composition (or abundance) in terms of the other variables measured.

so my advice is the same as with regression; think ahead of time what your hypotheses are and include variables that reflect those hypotheses. Don't just throw all explanatory variables into the mix.

I'll show an example comparing PCA, CA and CCA using the vegan package for R which I help maintain and which is designed to fit these kinds of ordination methods:

vegan doesn't standardise the Inertia, unlike Canoco, so the total variance is 1826 and the Eigenvalues are in those same units and sum to 1826 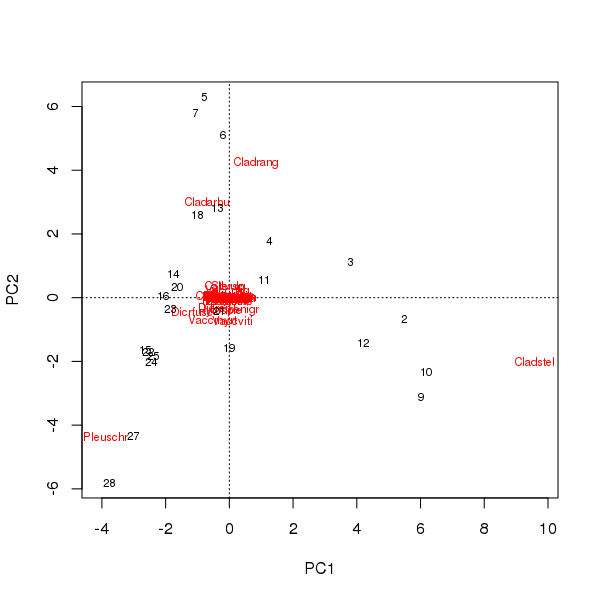 There are two issues here

A CA might assist with both these points as it handles long gradient better due to the unimodal response model, and it models relative composition of species not raw abundances. 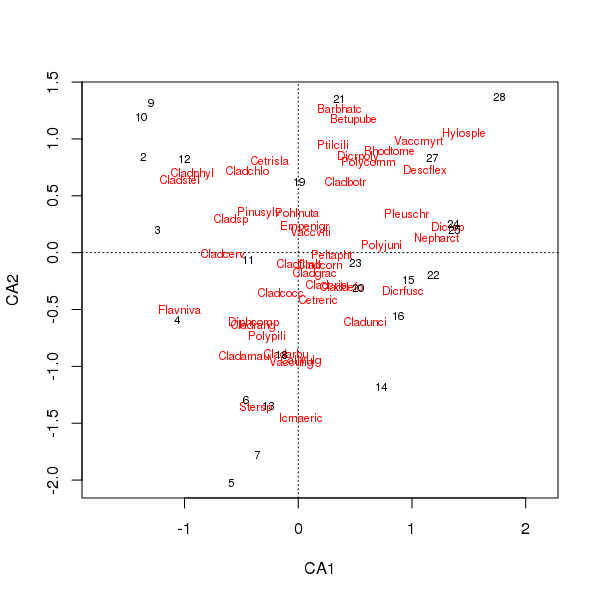 Which of PCA or CA you choose should be determined by the questions you wish to ask of the data. Usually with species data we are more often interested in difference in the suite of species so CA is a popular choice. If we have a data set of environmental variables, say water or soil chemistry, we wouldn't expect those to respond in a unimodal manner along gradients so CA would be inappropriate and PCA (of a correlation matrix, using scale = TRUE in the rda() call) would be more appropriate.

Now if we have second set of data which we wish to use to explain patterns in the first species data set, we must use a constrained ordination. Often the choice here is CCA, but RDA is an alternative, as is RDA after transformation of the data to allow it to handle species data better.

We re-use the cca() function but we either supply two data frames (X for species, and Y for explanatory/predictor variables) or a model formula listing the form of the model we wish to fit. 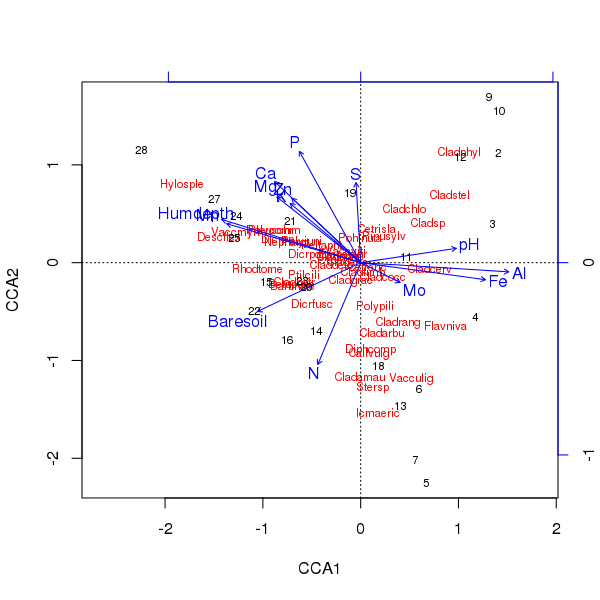 Of course, now the task is to work out which of those variables is actually important. Also note that we have explained about 2/3 of the species variance using just 13 variables. one of the problems of using all variables in this ordination is that we've created an arched configuration in sample and species scores, which is purely an artefact of using too-many correlated variables.

If you want to know more about this, check out the vegan documentation or a good book on multivariate ecological data analysis.

It is simplest to illustrate the link with RDA, but CCA is just the same except everything involves row and column two-way-table marginal sums as weights.

At it's heart, RDA is equivalent to the application of PCA to a matrix of fitted values from a multiple linear regression fitted to each species (response) values (abundances, say) with predictors given by the matrix of explanatory variables.

In R we can do this as

The Eigenvalues for these two approaches are equal:

For some reason I can't get the axis scores (loadings) to match, but invariably these are scaled (or not) so I need to look into exactly how those are being done here.

We don't do the RDA via rda() as I showed with lm() etc, but we use a QR decomposition for the linear model part and then SVD for the PCA part. But the essential steps are the same.

Not the answer you're looking for?Browse other questions tagged pca multivariate-analysis ecology correspondence-analysis or ask your own question.

23
What is “reduced-rank regression” all about?

8
Dimension reduction techniques for very small sample sizes
10
How to get “eigenvalues” (percentages of explained variance) of vectors that are not PCA eigenvectors?
1
Double zeroes problem with euclidean distance and abundance data - is the problem widely varying abundances or mutually missing taxa?
5
Difference between NA and None in biological dataset
0
Which analysis to use to discriminate morphometrics measurements from different species from 2 different environment?