I am trying to apply some data analysis on data which is generated by picking points from a sine wave with some noise added in. I am purposefully ignoring the time dependence, so just collecting data points and plotting in a histogram you get something like 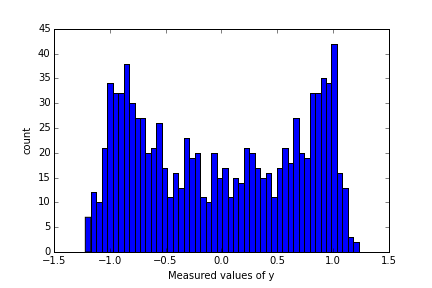 Image generated by (if that helps)

I know the pdf for picking points from a sine wave without noise, it is given by

where y0 and A are define in the following way: y = y0 + A*sin(t). For more about this, I already asked a question and was kindly helped on this site

However the samples don't seem to converge and even stranger I get values of y0 and A outside of the allowed regions.

As you may have guessed I'm fairly new to this. Some background in case it helps: I am attempting to do a model comparison between data generated by a sine wave (as above) and data generated by a square wave which was answered very nicely in this post. Both produce a bimodal distribution so are feasible for the data set.

All advice will be hugely appreciated.

Hopefully that already will give you the correct answer. Moreover, for circular distributions like that you might also want to look into the von Mises distribution which will probably be a better prior for the phase.

As an aside, you can just set: tau=std_dev**-2 in your likelihood to achieve the same result.

Not the answer you're looking for? Browse other questions tagged bayesian normal-distribution mcmc pymc or ask your own question.

2
Constructing a Bayesian network from the beginning
3
Can I say anything about the shape of the posterior distribution?
3
PyMC – Calculate Evidence (Bayes' Theorem denominator)
12
Probability distribution for a noisy sine wave
3
I Want to see Bi-Modal Posterior in Bayesian Linear Regression!
4
Choice of a model for Bayesian Change Point Detection
1
Can I use Hamiltionian Monte Carlo when my likelihood is not a direct function of my parameters?