Is up- or down-sampling imbalanced data actually that effective? Why?

I frequently hear up- or down-sampling of data discussed as a way of dealing with classification of imbalanced data.

I understand that this could be useful if you're working with a binary (as opposed to probabilistic or score-based) classifier and treating it as a black box, so sampling schemes are your only way to tweak its position on the "ROC curve" (in quotes because if your classifier is inherently binary I guess it doesn't have a real ROC curve, but the same concept of trading off false positives and false negatives still applies).

But it seems like the same justification doesn't hold if you actually have access to some kind of score that you're later thresholding to make a decision. In this case, isn't up-sampling just an ad-hoc way of expressing a view about your desired trade-off between false positives and false negatives when you have much better tools available, like actual ROC analysis? It seems like it would be weird in this case to expect up-sampling or down-sampling to do anything but change your classifier's "prior" on each class (i.e. unconditional probability of being that class, the baseline prediction)--I wouldn't expect it to change the classifier's "odds ratio" (how much the classifier adjusts its baseline prediction based on the covariates).

The short answer appears to be Yes: there is some evidence that upsampling of the minority class and/or downsampling of the majority class in a training set can somewhat improve out-of-sample AUC (area under the ROC curve, a threshold-independent metric) even on the unaltered, unbalanced data distribution.

With that said, in most or all of the examples I've seen, the increases in AUC are very modest -- a typical "best case" (i.e., best over all the models and sampling methods examined by an author) would be, say, AUC = .91 without up/downsampling vs. AUC = .93 with up/downsampling. I haven't seen any example where applying up/downsampling could turn a bad AUC into a good AUC in any circumstance. I'm also not aware of evidence that upsampling/downsampling can improve generalization under a strictly proper scoring rule like the Brier score (see this great answer for more info about that). 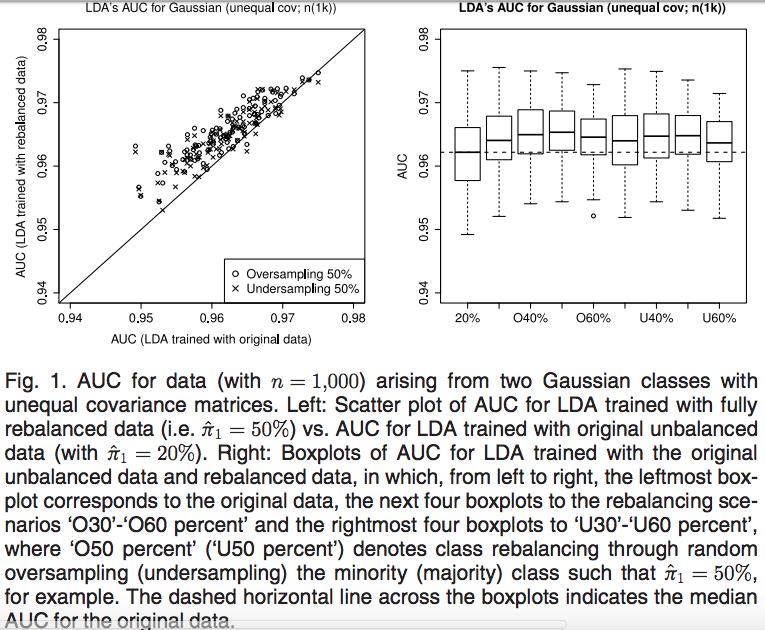 If you want to first to collect sample to do classification based on these results, then undersampling might be necessary even from the cost perpective.

But in this case your estimation methods typically do not return population level probabilities, they are conditional on the sampling scheme which was used.

95
Are unbalanced datasets problematic, and (how) does oversampling (purport to) help?
28
What does it mean that AUC is a semi-proper scoring rule?
9
How does class balancing via reweighting affect logistic regression?

7
Is it correct to use Precision-Recall AUC in a balanced dataset situation?
4
Is dummy classifier precision always 0.5, even on unbalanced datasets?
12
How to improve F1 score with skewed classes?
3
How to calculate TPR and FPR and plot ROC curves for object detection?
3
Finding optimal point in roc curve giving weighs to true positives and false negatives