When is R squared negative?

I get a negative value. Can anyone explain what this means?

Example: fit data to a linear regression model constrained so that the $Y$ intercept must equal $1500$. 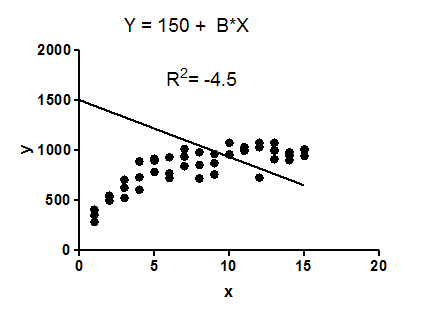 The model makes no sense at all given these data. It is clearly the wrong model, perhaps chosen by accident.

Bottom line: a negative $R^2$ is not a mathematical impossibility or the sign of a computer bug. It simply means that the chosen model (with its constraints) fits the data really poorly.

Have you forgotten to include an intercept in your regression? I'm not familiar with SPSS code, but on page 21 of Hayashi's Econometrics:

then the $R^2$ can be negative. This is because, without the benefit of an intercept, the regression could do worse than the sample mean in terms of tracking the dependent variable (i.e., the numerator could be greater than the denominator).

I'd check and make sure that SPSS is including an intercept in your regression.

This can happen if you have a time series that is N.i.i.d. and you construct an inappropriate ARIMA model of the form(0,1,0) which is a first difference random walk model with no drift then the variance (sum of squares - SSE ) of the residuals will be larger than the variance (sum of squares SSO) of the original series. Thus the equation 1-SSE/SSO will yield a negative number as SSE execeedS SSO . We have seen this when users simply fit an assumed model or use inadequate procedures to identify/form an appropriate ARIMA structure. The larger message IS that a model can distort (much like a pair of bad glasses ) your vision. Without having access to your data I would otherwise have a problem in explaining your faulty results. Have you brought this to the attention of IBM ?

The idea of an assumed model being counter-productive has been echoed by Harvey Motulsky. Great post Harvey !

Not the answer you're looking for? Browse other questions tagged regression spss r-squared or ask your own question.

8
Why can $R^2$ be negative in linear regression -- interview question
0
How to interpret/compare R2 score(s)?
27
What does negative R-squared mean?
30
Is there any difference between $r^2$ and $R^2$?
5
Can the coefficient of determination $R^2$ be more than one? What is its upper bound?
5
Can the coefficient of determination (R-squared) for a linear regression ever be zero?
9
Would the real adjusted R-squared formula please step forward?
4
Is it possible to get a negative F-statistic (e.g. in ANOVA)?
6
Can the multiple linear correlation coefficient be negative?
5
R squared always higher than 1
See more linked questions