Is there a simple algorithm to sample from the uniform distribution on sequences of $n$ numbers, each taking one of $m$ integer values from $0$ to $m-1$, where each value can be repeated at most $r$ times? (For this to make sense, we need $rm\geq n$.)

It would be nice to be able to choose each value in order from the conditional distribution given the previous values (and marginalized over future values), but I don't know how to express that.

We can perform rejection sampling: sample with full replacement and reject sequences that don't fit the $m$ criterion. But for $rm\approx n$, this method will be very slow.

My question is motivated by this stackoverflow question: How to generate evenly distributed n-permutation from range 0 to m

The answer is yes.

Tabulating such a sample produces a sequence of $m$ integers with values between $0$ and $r$ inclusive. "Uniform" suggests making the counts exchangeable in the sense that any sample in which the integer $i$ appears $k_i$ times, which can be summarized as the vector $\mathbf{k} = (k_0,k_1,k_2, \ldots, k_{m-1}),$ is just as likely as a sample summarized by any permutation of the components of $\mathbf{k}.$

It remains to create a random tableau. Simply sample $n$ of its cells without replacement.

In R this can be accomplished with this function:

It samples without replacement from the integers $0,1,\ldots, mr-1$ and reduces them modulo $m.$ The properties of this procedure are so obvious they scarcely need stating or proving.

Here are some tableaux for random samples with $n=11, m=5, r=3.$ Red cells are the selected ones: 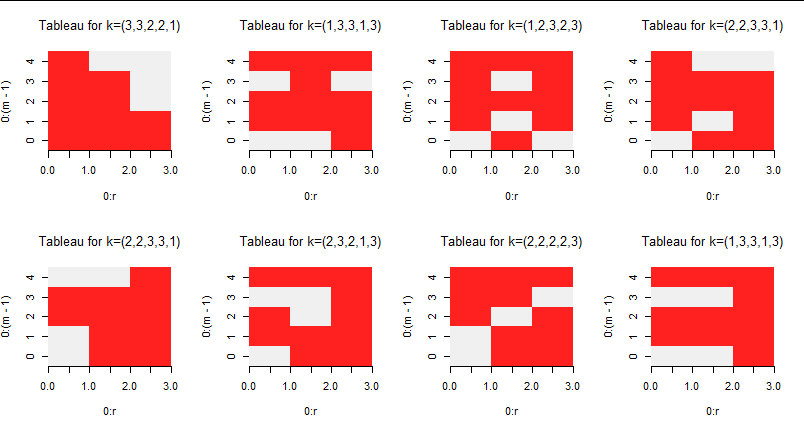 Would this work (Algorithm 1):

This is a functional procedure that produces the samples, but

Another version which I also think is going to work is (Algorithm 2):

I think (although I can't prove it) that this algorithm will produce the right probabilities. It is possible that with a smart choice of the ways to draw the next element, you can enumerate all possible sequences: instead of random numbers, draw entries in a deterministic cycle.

It is as if you want to generate all the possible permitted sequences ($24$ in your final example) and then just select one of them. That will actually work as an algorithm (let's call it A1), though it will be inefficient with large numbers, probably inevitable given your condition that the future affects the past.

Two alternative approaches which do not have future intentions affecting the past, so giving different probabilities, would involve

Both of these allow you to go on and increase $n$ later without having to start again; it means that the distributions for the early selections do not depend on $n$.

A3 has the feature that if $n=mr$ (so a full selection without replacement) then is gives the same distribution as A1 without having to generate all $\frac{(mr)!}{(r!)^m}$ possibilities in advance.