I need to transform these random variables i.e. $Z$ and $LZ$ to make them probabilities and lie in [0, 1], as I want to simulate a Bernoulli Trial with that probability.

I see that as a case of remapping probability densities.

For case 1, I think I could use the logistic transform on $Z$ to make it a probability which lies in [0, 1]. I hope that makes sense?

Also, I am clueless regarding how to do this mapping for the case of lognormal distribution?

I would really appreciate any feedback on this!

Since the sum of two independent normals is normal, you wouldn't get a uniform (as in your original title) by applying a logistic transformation on the sum.

In the second case, the sum of two independent lognormals doesn't have a nice closed form. 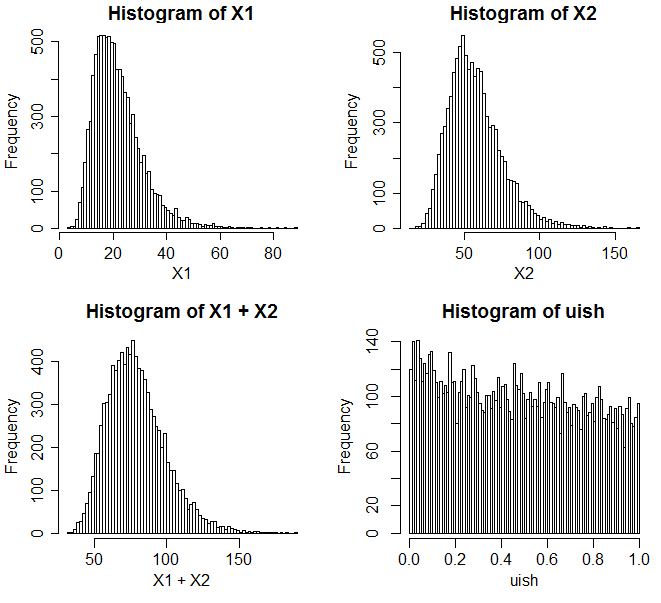 (Code is given below)

By comparison, the problem with just getting the range right is that in practice almost all of the values are likely to end up in a very narrow part of the range: 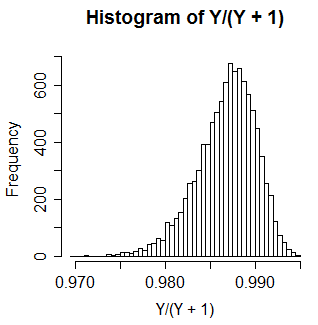 That's the same sum, transformed by a standard log-logistic cdf. It's certainly in $(0,1)$, but in a sample of 10000 values, all of them were between 0.97 and 0.995. If that's what you want, then you should be okay (keeping in mind that the next one might be piled up the other end - or end up U-shaped, or bunched in the middle). If it's not what you need, then I suggest you at least do some approximate quantile matching or moment matching to get a better spread of values.

If it's just a matter of doing the simulation, you can, in the normal case, do:

By the way, the title of the question is misleading. You're just changing the range of the random variables, you're not transforming them in a uniform random variable.

Let $X$ have the continuous cdf $F_X(x)$ then define the random variable $Y=F_X(x)$. Then $Y$ is uniformly distributed on $(0,1)$. This important property is called the Probability Integral Transform.

In your case, you may transform $Z$ and $LZ$ to uniformly distributed variables by using their respective cdf's. The first cdf is easy (Z is normally distributed), the last is more challenging (the sum of two log normals is not log normal).

Not the answer you're looking for? Browse other questions tagged logistic normal-distribution data-transformation lognormal uniform or ask your own question.