What is the distribution of $R^2$ in linear regression under the null hypothesis? Why is its mode not at zero when $k>3$?

What is the distribution of the coefficient of determination, or R squared, $R^2$, in linear univariate multiple regression under the null hypothesis $H_0:\beta=0$?

How does it depend on the number of predictors $k$ and number of samples $n>k$? Is there a closed-form expression for the mode of this distribution?

In particular, I have a feeling that for simple regression (with one predictor $x$) this distribution has mode at zero, but for multiple regression the mode is at a non-zero positive value. If this is indeed true, is there an intuitive explanation of this "phase transition"?

As @Alecos showed below, the distribution indeed peaks at zero when $k=2$ and $k=3$ and not at zero when $k>3$. I feel that there should be a geometrical view on this phase transition. Consider geometrical view of OLS: $\mathbf y$ is a vector in $\mathbb R^n$, $\mathbf X$ defines a $k$-dimensional subspace there. OLS amounts to projecting $\mathbf y$ onto this subspace, and $R^2$ is squared cosine of the angle between $\mathbf y$ and its projection $\hat{\mathbf y}$.

Update 2: I am accepting @Alecos'es answer, but still have a feeling that I am missing some important insight here. If anybody ever suggests any other (geometrical or not) view on this phenomenon that would make it "obvious", I will be happy to offer a bounty.

For the specific hypothesis (that all regressor coefficients are zero, not including the constant term, which is not examined in this test) and under normality, we know (see eg Maddala 2001, p. 155, but note that there, $k$ counts the regressors without the constant term, so the expression looks a bit different) that the statistic

Note that although we do not test the constant term, $k$ counts it also.

But the right hand side is distributed as a Beta distribution, specifically

The mode of this distribution is

This is consistent with the general requirement for a Beta distribution, which is

IMPLICATIONS
Assume that you have $k=5$ regressors (including the constant), and $n=99$ observations. Pretty nice regression, no overfitting. Then 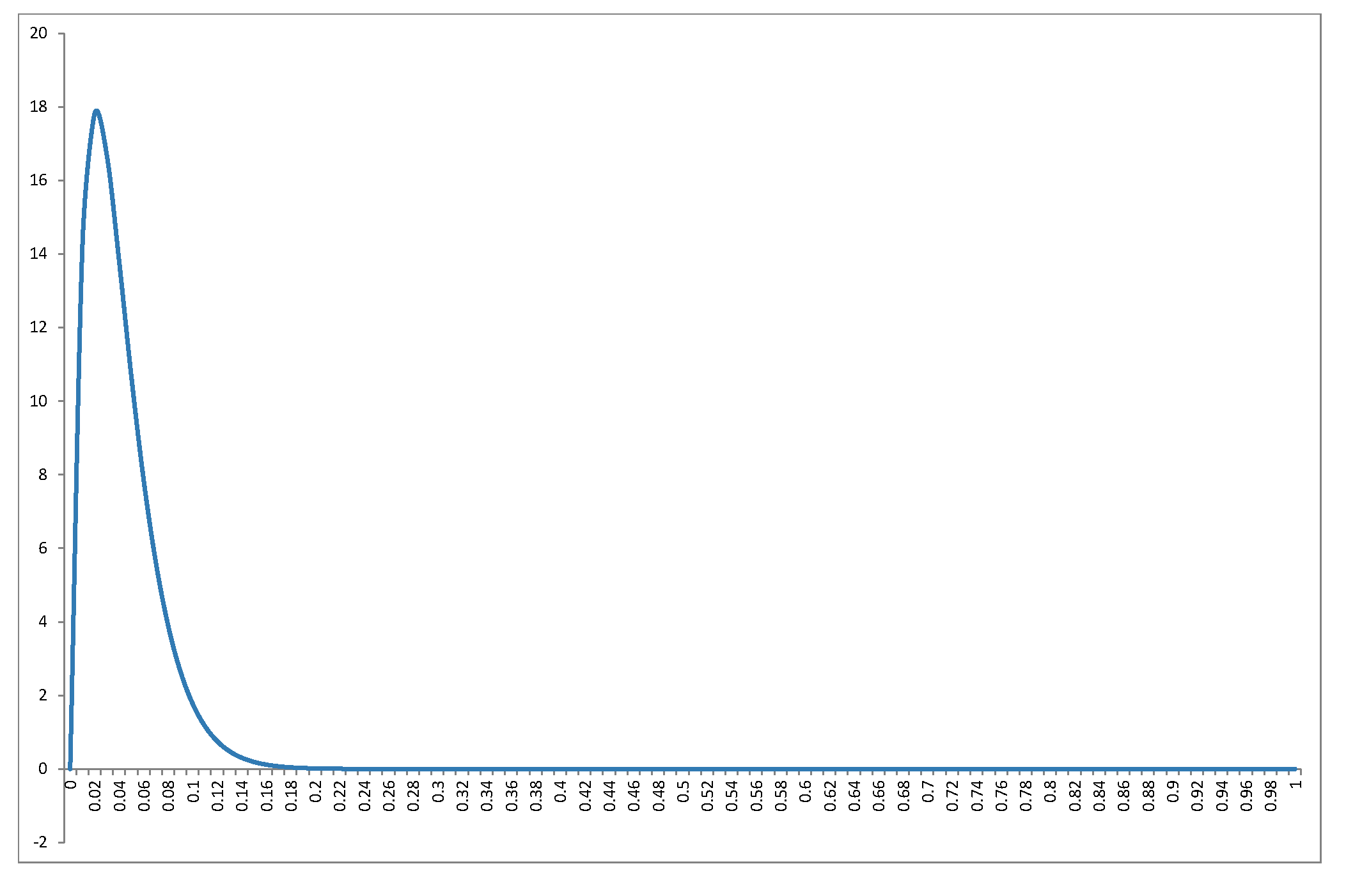 But also, note how "easy" it is to reject the null hypothesis: in the particular example, for $R^2=0.13$ cumulative probability has already reached $0.99$, so an obtained $R^2>0.13$ will reject the null of "insignificant regression" at significance level $1$%.

ADDENDUM
To respond to the new issue regarding the mode of the $R^2$ distribution, I can offer the following line of thought (not geometrical), which links it to the "spurious fit" phenomenon: when we run least-squares on a data set, we essentially solve a system of $n$ linear equations with $k$ unknowns (the only difference from high-school math is that back then we called "known coefficients" what in linear regression we call "variables/regressors", "unknown x" what we now call "unknown coefficients", and "constant terms" what we know call "dependent variable"). As long as $k<n$ the system is over-identified and there is no exact solution, only approximate -and the difference emerges as "unexplained variance of the dependent variable", which is captured by $1-R^2$. If $k=n$ the system has one exact solution (assuming linear independence). In between, as we increase the number of $k$, we reduce the "degree of overidentification" of the system and we "move towards" the single exact solution. Under this view, it makes sense why $R^2$ increases spuriously with the addition of irrelevant regressions, and consequently, why its mode moves gradually towards $1$, as $k$ increases for given $n$.

I won't rederive the $\mathrm{Beta}(\frac{k-1}{2}, \, \frac{n-k}{2})$ distribution in @Alecos's excellent answer (it's a standard result, see here for another nice discussion) but I want to fill in more details about the consequences! Firstly, what does the null distribution of $R^2$ look like for a range of values of $n$ and $k$? The graph in @Alecos's answer is quite representative of what occurs in practical multiple regressions, but sometimes insight is gleaned more easily from smaller cases. I've included the mean, mode (where it exists) and standard deviation. The graph/table deserves a good eyeball: best viewed at full-size. I could have included less facets but the pattern would have been less clear; I have appended R code so that readers can experiment with different subsets of $n$ and $k$. 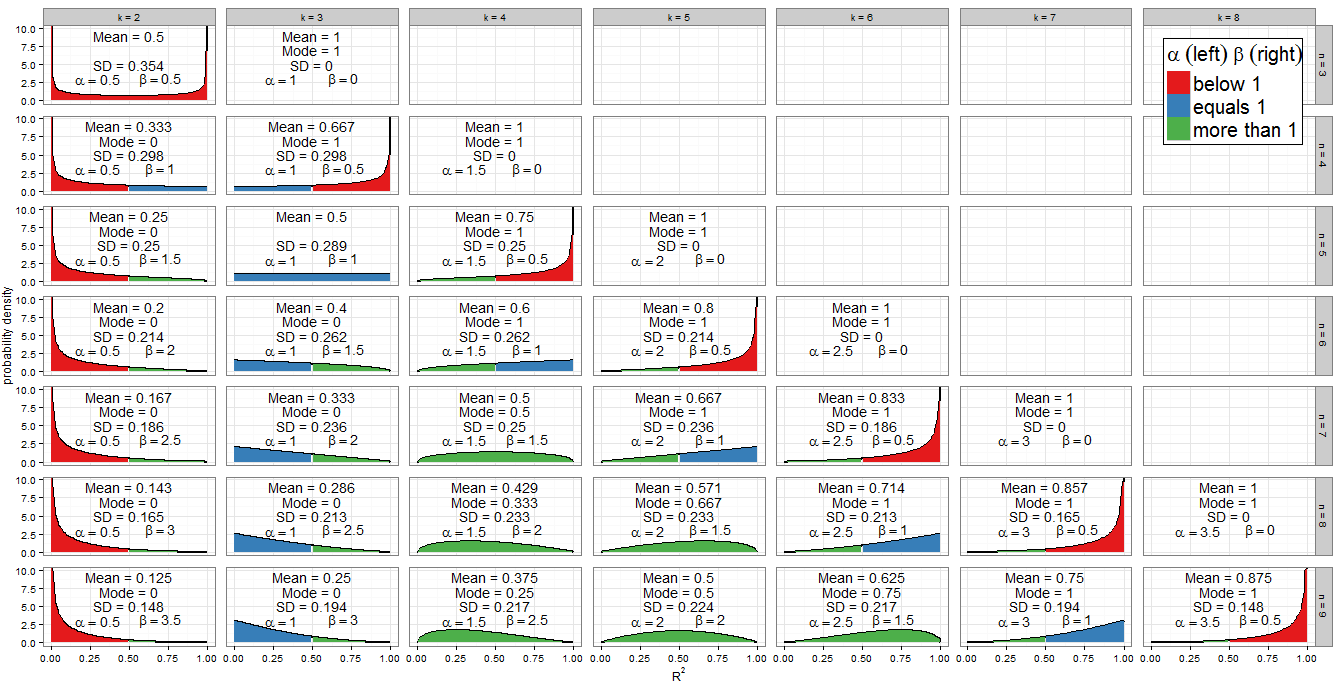 The graph's colour scheme indicates whether each shape parameter is less than one (red), equal to one (blue), or more than one (green). The left-hand side shows the value of $\alpha$ while $\beta$ is on the right. Since $\alpha = \frac{k-1}{2}$, its value increases in arithmetic progression by a common difference of $\frac{1}{2}$ as we move right from column to column (add a regressor to our model) whereas, for fixed $n$, $\beta = \frac{n-k}{2}$ decreases by $\frac{1}{2}$. The total $\alpha + \beta = \frac{n-1}{2}$ is fixed for each row (for a given sample size). If instead we fix $k$ and move down the column (increase sample size by 1), then $\alpha$ stays constant and $\beta$ increases by $\frac{1}{2}$. In regression terms, $\alpha$ is half the number of regressors included in the model, and $\beta$ is half the residual degrees of freedom. To determine the shape of the distribution we are particularly interested in where $\alpha$ or $\beta$ equal one.

One of the most eye-catching features of the graph is the level of symmetry, but when the Beta distribution is involved, this shouldn't be surprising!

The Beta distribution itself is symmetric if $\alpha = \beta$. For us this occurs if $n = 2k-1$ which correctly identifies the panels $(k=2, n=3)$, $(k=3, n=5)$, $(k=4, n=7)$ and $(k=5, n=9)$. The extent to which the distribution is symmetric across $R^2 = 0.5$ depends on how many regressor variables we include in the model for that sample size. If $k = \frac{n+1}{2}$ the distribution of $R^2$ is perfectly symmetric about 0.5; if we include fewer variables than that it becomes increasingly asymmetric and the bulk of the probability mass shifts closer to $R^2 = 0$; if we include more variables then it shifts closer to $R^2 = 1$. Remember that $k$ includes the intercept in its count, and that we are working under the null, so the regressor variables should have coefficient zero in the correctly specified model.

So this explains the symmetry as we vary the number of regressors in the model for a fixed sample size. It also explains the distributions that are themselves symmetric as a special case: for them, $k' = k$ so they are obliged to be symmetric with themselves!

This tells us something we might not have guessed about multiple regression: for a given sample size $n$, and assuming no regressors have a genuine relationship with $Y$, the $R^2$ for a model using $k-1$ regressors plus an intercept has the same distribution as $1 - R^2$ does for a model with $k-1$ residual degrees of freedom remaining.

When $k=n$ we have $\beta=0$, which isn't a valid parameter. However, as $\beta \to 0$ the distribution becomes degenerate with a spike such that $\mathsf{P}(R^2 = 1)=1$. This is consistent with what we know about a model with as many parameters as data points - it achieves perfect fit. I haven't drawn the degenerate distribution on my graph but did include the mean, mode and standard deviation.

You may also have noticed the triangular distributions at $(k=5,n=7)$ and its reflection $(k=3,n=7)$. We can recognise from their $\alpha$ and $\beta$ that these are just special cases of the power-law and reflected power-law distributions where the power is $2-1=1$.

The question asked about the mode, but the mean of $R^2$ under the null is also interesting - it has the remarkably simple form $\frac{k-1}{n-1}$. For a fixed sample size it increases in arithmetic progression as more regressors are added to the model, until the mean value is 1 when $k=n$. The mean of a Beta distribution is $\frac{\alpha}{\alpha+\beta}$ so such an arithmetic progression was inevitable from our earlier observation that, for fixed $n$, the sum $\alpha+\beta$ is constant but $\alpha$ increases by 0.5 for each regressor added to the model.

Not the answer you're looking for? Browse other questions tagged regression mathematical-statistics r-squared intuition or ask your own question.

1
R squared generated from regression with randomly generated variables
31
Geometric interpretation of multiple correlation coefficient $R$ and coefficient of determination $R^2$
11
What is the power of the regression F test?
3
When is beta distribution bell-shaped or concave?
12
Expected value of $R^2$, the coefficient of determination, under the null hypothesis
7
Is $R^2_{adjusted}$ both unbiased and consistent under the alternative in simple regression?
6
What measure of effect size in ANOVA has mode at zero under the null (unlike $\eta^2$ that does not)?
5
Why do we make a F-Test rather than a Beta-Test in ANOVAs?
6
$R^2$ of a regression predicting noise
3
How to visualize impact of variables on formula?
See more linked questions

6
What is the probability regression coefficient is larger than its OLS estimate
18
What is the intuition behind exchangeable samples under the null hypothesis?
74
Unified view on shrinkage: what is the relation (if any) between Stein's paradox, ridge regression, and random effects in mixed models?
19
Under exactly what conditions is ridge regression able to provide an improvement over ordinary least squares regression?
6
What measure of effect size in ANOVA has mode at zero under the null (unlike $\eta^2$ that does not)?
19
Geometric understanding of PCA in the subject (dual) space
5
Can we correctly identify all the non-zero coefficients in the linear regression model?
0
Convergence of sum of residuals to zero vs Minimizing sum of squared residuals
5
Heteroscedasticity that depends on the regression parameters