What is a Dirichlet prior

I am doing some bioinformatics research but my background is Applied Math and I usually have trouble with the statistics part of it.

for the type parameter, the details section says this

The PWM function uses a multinomial model with a Dirichlet conjugate prior to calculate the estimated probability of base b at position i. As mentioned in the Arguments section, prior.params supplies the parameters for the DNAbases A,C,G,andT in the Dirichlet prior. These values result in a position independent initial estimate of the probabilities for the bases to be priorProbs = prior.params/sum(prior.params) and the posterior(data infused)estimate for the probabilities for the bases in each of the positions to be postProbs = (consensusMatrix(x) + prior.params)/(length(x) + sum(prior.params)). When type = "log2probratio", the PWM=unitScale(log2(postProbs/priorProbs)). When type = "prob", the PWM = unitScale(postProbs).

Could someone help me understand the two different types here? Usually a PWM will have a pseudocounts added if the entries of the position frequency matrix has a lot of zeros (or small dataset). The columns of the PFM will be multiplied by a Dirichlet distribution. I guess I really just need help on what a Dirichlet distribution is and how it relates to a multinomial model.

Let me try to respond your very last question about understanding the Dirichlet distribution, its relation to the Multinomial, and what I suspect is what you really would like to know is how this could be explained in an applied context, such as your genomics problem.

Now I am going to explain all this using my vague recall of haplogroup SNPs, which might be somewhat similar to your data:

Now, a minute of some math: 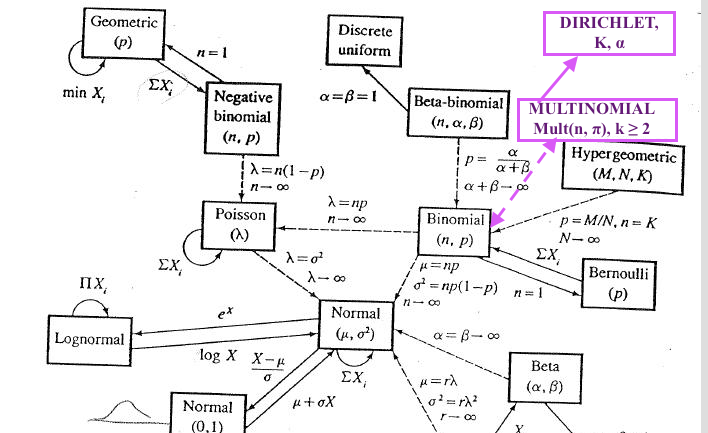 Also, somewhere along those arrows would be another relevant distribution, the Categorical Distribution.

The set up we are going to use for our problem is based on the Pólya urn model where we would sample with replacement $N$ strings of the 4-lettered nucleotide bases that show up in $k$ my-sub-sub-subclade-linked SNPs, where each of SNP of an observed nucleotide bases can be sampled with probabilities $p_1,\dots,p_k$.

Since we don't know how many and which SNPs fall into the the "linked SNPs for this sub-sub-subclade", we would assume those unknown SNPs that may or may not exist for this sub-sub-subclade are represented by a parameter $\alpha$, where he $\alpha_1,\dots,\alpha_k$ and those might actually be the pseudocounts you are referencing. Here is a nice response and a reference to some problems with this approach to the Dirichlet-Miltonomial. I would highly recommend checking Bioconductor or that package documentation because those pseudocounts can easily be just a simple method to convert different matrices while integrating very different distributions.

P.S. I suspect the reason Dirichlet and Multinomial are so applicable to genomics and are used in some Bioinformatics packages in R is probably due to a lot of discretization in these types of dataset and also, traditional models such as the ones based on the Hardy-Weinberg Principle as they are mathematically a perfect candidate of some Binomial, Beta, Multinomial etc type of a setup because you are essentially estimating the frequencies of some counts in some discrete categories (although the Dirichlet does not require the parameters $\alpha$ to be integers.

P.P.S. From a very reduced set up above, I have omitted other important things to consider which can be found in this tutorial, such as Dirichlet Process and specifically, the partition step of some probability space $\Theta$ to find

There is a good explanation in this presentation.

You can watch the whole presentation if you want (it is a good explanation of the Dirichlet distribution) but I think the slides will get the concept across pretty quickly.

Slides 32-35 Explains the mathematical process of the Dirichlet prior.

Slide 50-60 shows what is going on when the distribution updates and shows the prior. (It is easier to see it visually than explain it) This gets the general idea across

Slide 94-102 shows what happens to the whole system as updating occurs. This is the same concept as slide 50-60 but tracks what happens for each iteration.

Not the answer you're looking for? Browse other questions tagged probability biostatistics dirichlet-distribution or ask your own question.

1
Can someone please explain these word probability formulas to me?
2
Can log-likelihood function calculated value (M-step) be smaller after 1 EM-iteration?
12
Laplace smoothing and Dirichlet prior
7
Dirichlet Prior for Multinomial
1
Dirichlet Process Clustering Prior
14
Purpose of Dirichlet noise in the AlphaZero paper
2
On posterior in the Bayesian bootstrap