Find the mode of a probability distribution function

The mode can be obtained by taking the derivative of $g(x)$ and setting it to zero. The obtained mode is an increasing function of $\alpha$, $\beta$ and $\sigma$. Thus, The mode given as \begin{equation} k(x)=\sigma \sqrt{ \beta(2\alpha -1)}. \end{equation}

However, the definition of square root, the mode is only defined when $\alpha \geq \dfrac{1}{2}$. However, my $\alpha$ parameter is defined on $(0, \infty)$. There's something I am missing out!! 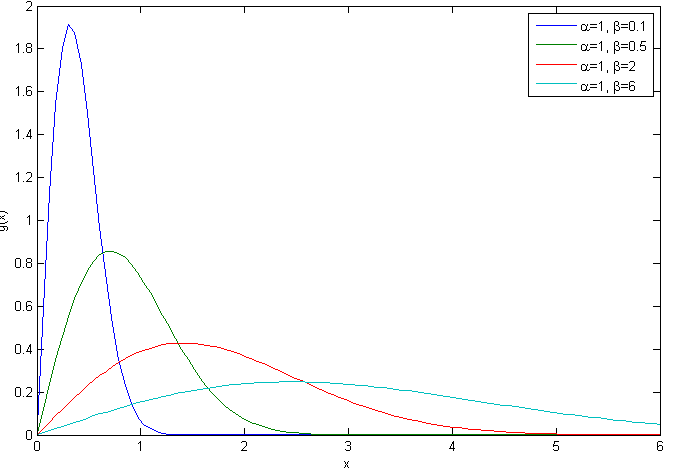 Consider that there are shapes of pdf that have a mode, but at which the derivative of the pdf is not zero (the Laplace being an obvious example).

There are also cases where there's no mode in the domain of the variable (examples below).

That is, we can't say as a general statement "the mode can be obtained by taking the derivative of $g(x)$ and setting it to zero". 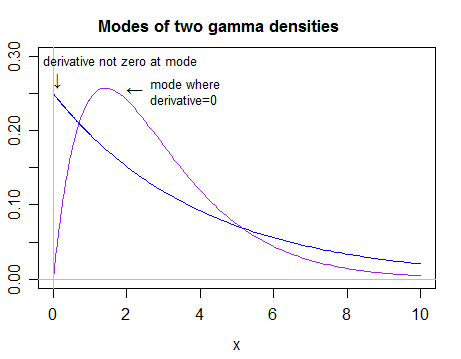 So there's no use looking for where the derivative is zero when it isn't zero at the mode - indeed it may not be zero anywhere.

Further, for some densities, even when the derivative is 0, it doesn't imply there's a mode there. Consider this density (a beta density): 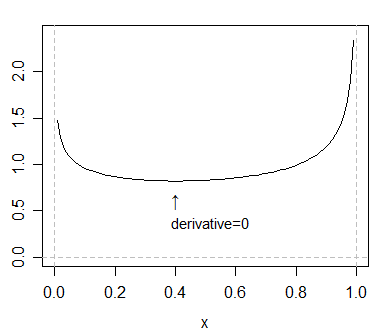 There's not a local mode where the derivative is zero; it's an antimode. You can also have a density with a horizontal point of inflexion which will be neither a mode nor an antimode: 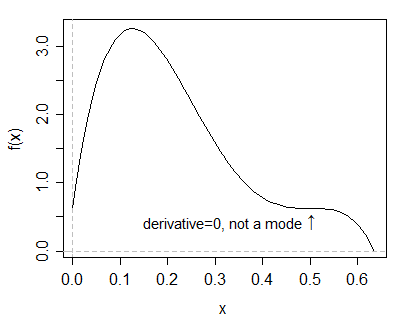 As a result, it's not sufficient to simply calculate a formula at which the derivative is zero; even if you can calculate such values, that may not tell you where the modes are.

You must work out when that calculation corresponds to modes of the density; where that fails, quite often the location of the mode is obvious (if it exists at all).

A first exercise would be to draw the density at a few values of $\alpha$ and see how it behaves. Then you should be able to bring some reasoning to bear on the problem, which will tell you where the mode is when $\alpha <\frac{1}{2}$.

It's possible for the function to be everywhere decreasing in the domain; if it's on an open interval there may be no mode in that interval. For example, in the case of the gamma with $\alpha<1$, it's not uncommon to say "there's a mode at 0" even though the limit isn't in the interval - it's strictly incorrect to say there's a mode in that case (but usually one can understand the actual intent if someone says there's a mode at 0 even though the function is unbounded in the limit).

Here's an example of what your density looks like at $\beta=\sigma=1$ for three different values of $\alpha$ near $0.5$: 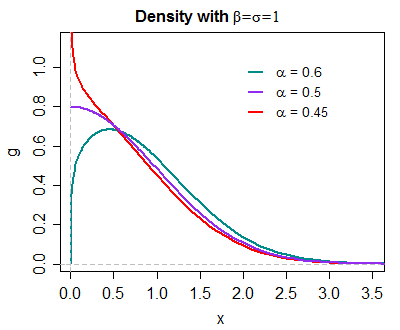 If it's the case that it is monotonic decreasing (you should carry out such a check for yourself), it doesn't strictly have a mode; best to simply describe the behavior near 0 for $\alpha<\frac{1}{2}$.

Not the answer you're looking for? Browse other questions tagged modeling pdf hazard parameterization or ask your own question.