Is there a boxplot variant for Poisson distributed data?

I'd like to know if there is a boxplot variant adapted to Poisson distributed data (or possibly other distributions)?

With a Gaussian distribution, whiskers placed at L = Q1 - 1.5 IQR and U = Q3 + 1.5 IQR, the boxplot has the property that there will be roughly as many low outliers (points below L) as there are high outliers (points above U).

If the data is Poisson distributed however, this does not hold anymore because of the positive skewness we get Pr(X<L) < Pr(X>U). Is there an alternate way to place the whiskers such that it would 'fit' a Poisson distribution?

Boxplots weren't designed to assure low probability of exceeding the ends of the whiskers in all cases: they are intended, and usually used, as simple graphical characterizations of the bulk of a dataset. As such, they are fine even when the data have very skewed distributions (although they might not reveal quite as much information as they do about approximately unskewed distributions).

Each boxplot depicts 50 iid draws from a Poisson distribution with given intensity (from 1 through 10, with two trials for each intensity). Notice that the skewness tends to be low. 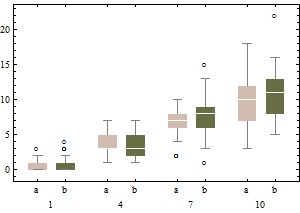 The same data on a square root scale tend to have boxplots that are slightly more symmetric and (except for the lowest intensity) have approximately equal IQRs regardless of intensity). 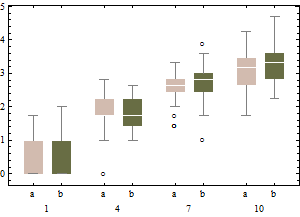 In sum, don't change the boxplot algorithm: re-express the data instead.

Incidentally, the relevant chances to be computing are these: what is the chance that an independent normal variate $X$ will exceed the upper(lower) fence $U$($L$) as estimated from $n$ independent draws from the same distribution? This accounts for the fact that the fences in a boxplot are not computed from the underlying distribution but are estimated from the data. In most cases, the chances are much greater than 1%! For instance, here (based on 10,000 Monte-Carlo trials) is a histogram of the log (base 10) chances for the case $n=9$: 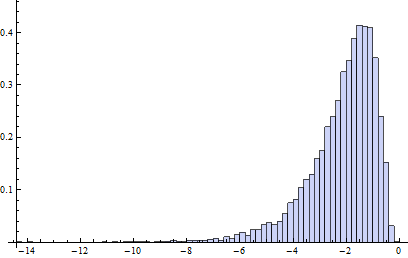 (Because the normal distribution is symmetric, this histogram applies to both fences.) The logarithm of 1%/2 is about -2.3. Clearly, most of the time the probability is greater than this. About 16% of the time it exceeds 10%!

There is a generalization of standard box-plots that I know of in which the lengths of the whiskers are adjusted to account for skewed data. The details are better explained in a very clear & concise white paper (Vandervieren, E., Hubert, M. (2004) "An adjusted boxplot for skewed distributions", see here).

I personally find it a better alternative to data transformation (though it is also based on an ad-hoc rule, see white paper).

Incidentally, I find I have something to add to whuber's example here. To the extend that we're discussing the whiskers' behaviour, we really should also consider what happens when considering contaminated data:

In this contamination model, B1 has essentially a log-normal distribution save for 20 percent of the data that are half left, half right outliers (the break down point of adjbox is the same as that of regular boxplots, i.e. it assumes that at most 25 percent of the data can be bad). 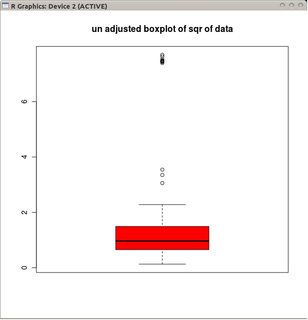 and the adjusted boxplot of the non-transformed data. 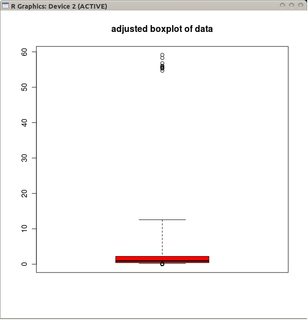 Compared to adjusted boxplots, the former option masks the real outliers and labels good data as outliers. In general, it will contrive to hide any evidence of asymmetry in the data by classifying offending points as outliers.

In this example, the approach of using the standard boxplot on the square root of the data finds 13 outliers (all on the right), whereas the adjusted boxplot finds 10 right and 14 left outliers.

In 'classical' boxplots the whiskers are placed at:

where IQR is the inter-quantile range, $Q_1$ is the 25th percentile and $Q_3$ is the 75th percentile of the data. The rule of thumb is to regard everything outside the fence as dubious data (the fence is the interval between the two whiskers).

This rule of thumb is ad-hoc: the justification is that if the uncontaminated part of the data is approximately Gaussian, then less than 1% of the good data would be classified as bad using this rule.

A weakness of this fence-rule, as pointed out by the OP, is that the length of the two whiskers are identical, meaning the fence-rule only makes sense if the uncontaminated part of the data has a symmetric distribution.

A popular approach is to preserve the fence-rule and to adapt the data. The idea is to transform the data using some skew correcting monotonous transformation (square root or log or more generally box-cox transforms). This is somewhat messy approach: it relies on circular logic (the transformation should be chosen so as to correct the skewness of the uncontaminated part of the data, which is at this stage an un-observable) and tends to make the data harder to interpret visually. At any rate, this remains a strange procedure whereby one changes the data to preserve what is after all an ad-hoc rule.

An alternative is to leave the data untouched and change the whisker rule. The adjusted boxplot allows the length of each whisker to vary according to an index measuring the skewness of the uncontaminated part of the data:

For cases when the good part of the data is symmetric, $M\approx 0$ and we're back to the classical whiskers.

The authors suggest using the med-couple as an estimator of $M$ (see reference inside the white paper) because of its high efficiency (though in principle any robust skew index could be used). With this choice of $M$, they then calculated the optimal $\alpha$ and $\beta$ empirically (using a large number of skewed distributions) as:

Not the answer you're looking for? Browse other questions tagged data-visualization poisson-distribution boxplot or ask your own question.

3
alternative to IQR
23
Whether to delete cases that are flagged as outliers by statistical software when performing multiple regression?
32
Outlier Detection on skewed Distributions
9
Finding outliers without assuming normal distribution
14
Boxplot equivalent for heavy-tailed distributions?
12
How accurate is IQR for detecting outliers
6
How to detect outliers in skewed data set?
8
Show series of exponential decay distributions in one chart
8
Median + MAD for skewed data
5
Re-check boxplot after outlier removal
See more linked questions

3
Equivalent of a boxplot for normally distributed data?
1
Outliers for boxplot
3
Inter quartile range and outliers in boxplot with logarithmic y-axis
14
Boxplot equivalent for heavy-tailed distributions?
13
Confused by location of fences in box-whisker plots
5
Should OLS always have a lower RMSE than Poisson Regression?
5
How to deal when you have too many outliers?