Basic - Modelling Two Series, one is an index

I'm trying to model two time series. One is a seasonally adjusted # of new jobs number against and index of business development. Its been a long time since I took econometrics, so I'm hoping someone can jump start my brain...

Here is a plot of the two series, but I've divided the blue line (jobs number) by 10 just so it looks somewhat similar to the orange number. I tried an OLS, but it didn't make much sense. 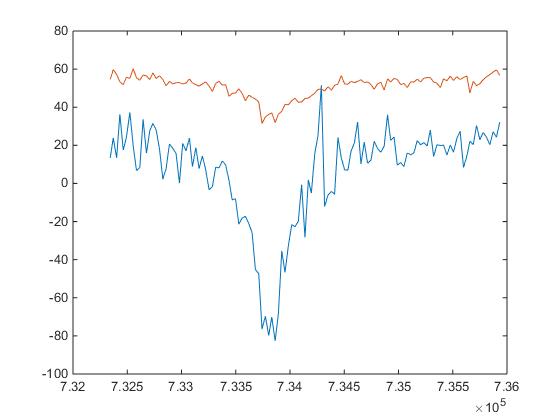 I hope this makes some sense. Should I be doing an polynomial fit? Or is there some time series thing that makes more sense? Or simply divide things until they look more similar?

Two classes of time-series models, which are somewhat similar to each other, spring to mind as potentially being useful in this context; ARMAX models and ARDL models. Let me set the scene by jogging your memory and reminding you what these models look like (in brief, so please jog!).

An ARMAX model would provide you with a framework to explain the number of new jobs not only by the index of business development (the explanatory variable), but also by its own lagged values (AR terms) and disturbances (MA terms). This kind of model, known as an ARMAX(p,q) model, can take the following form $$ y_{t} = \beta x_{t} + \phi_{1}y_{t-1} + \cdots + \phi_{p}y_{t-p} + \epsilon_{t} + \theta_{1}\epsilon_{t-1} \cdots + \theta_{q}\epsilon_{t-q} $$ where the number of new jobs and the index of business development are denoted by $y_{t}$ and $x_{t}$, respectively. My favourite online reference for these models is this Rob Hyndman blog post and I recommend checking it out for more details (subtleties).

Nested within this model are some nice special cases with interesting interpretations! I'll mention just a few which could be useful to you and I'll leave a reference in case you want to track down the others. Note that the special cases can be extended into the more general ARDL(p,q) model.

OK, so there we have a bunch of models that could be useful, but in order to build the empirical model some investigation is required. In other words, to select a model you'll need to employ some strategy.

Note that the nested nature of the ARDL model provides a modelling environment conducive to the general-to-specific approach of time-series econometric modelling, which is associated with David F. Hendry, so there's one place to look.

Hopefully that has jump started your brain enough to proceed, but let me end with some suggestions (listed in no particular order).

Based on the information provided, that's all I can say. Fundamentally, some modelling will have to be done on your behalf. I hope I've helped.

Not the answer you're looking for? Browse other questions tagged regression time-series multiple-regression econometrics or ask your own question.

0
Comparison of Two Time Series (Strategies) - Are they different?
8
Which econometric models can be used to forecast security returns + ARIMA/GARCH questions
3
How to deal with large number of times series?