I found a following explanation on a blog and I would like to get more information about the non-transitivity of correlation:

We have the following indisputable facts:

From these premises 1 and 2, it seems to follow logically from that: women on average have a lower IQ than men. But it is a fallacy! In statistics, correlations are not transitive. The proof is that you just need to look at the results of IQ tests, and they show that the IQ of men and women do not differ on average.

I would like to understand this non-transitivity of correlation a bit deeper.

If the correlation between IQ and brain size was 0.9 (which I know it isn't (1)), would deducing that women on average have a lower IQ than men would still be a fallacy?

Please, I am not here to talk about IQ (and the limits of the test), sexism, woman stereotype, arrogance and so on (2). I just want to understand the logical reasoning behind the fallacy.

(1) which I know it isn't: Neanderthals had bigger brains than homo sapiens, but were not smarter;

(2) I am a woman and overall, I don't consider myself, or the other women less smart than men, I don't care about IQ test, because what count is the value of people, and it's not based on the intellectual abilities.

The original source in French:

On a les faits indiscutables suivants: 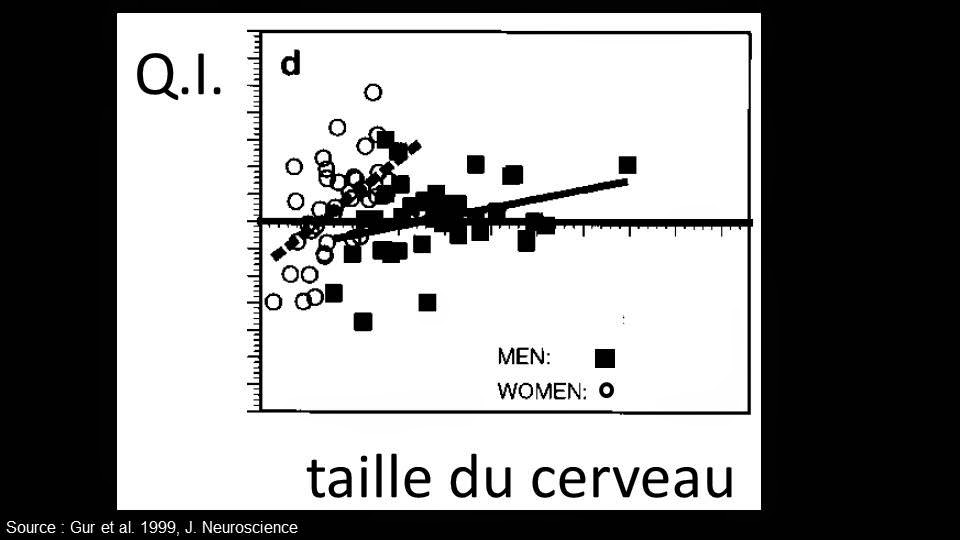 Yes, it would still be a fallacy. 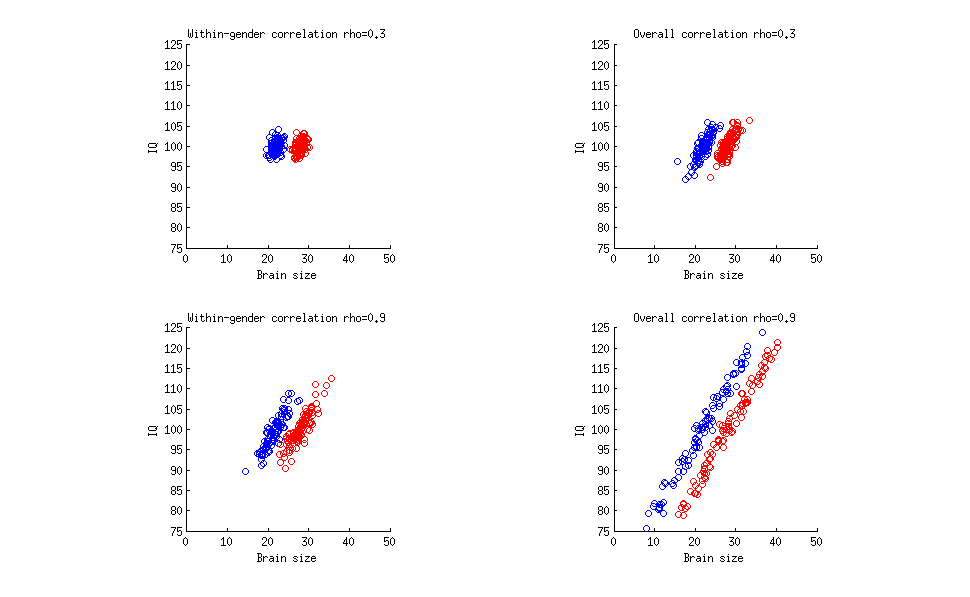 In the upper-left subplot within-gender correlation (computed separately over men and separately over women, then averaged) is $0.3$, like in your quote. In the upper-right subplot overall correlation (over men and women together) is $0.3$. Note that your quote does not specify what the number of $0.33$ refers to. In the lower-left subplot within-gender correlation is $0.9$, like in your hypothetical example; in the lower-right subplot overall correlation is $0.9$.

So you can have any value of correlation, and it does not matter if it's computed overall or within-group. Whatever the correlation coefficient, it is very well possible that there is zero correlation between gender and IQ and zero gender difference in mean IQ.

We can solve this numerically and plot the minimal possible positive value of $\lambda$ for different $a$ and $b$:

We can work out a precise condition for this "transitivity": as mentioned above, the smaller root should be positive, i.e. $ab - \sqrt{(1-a^2)(1-b^2)}>0$, which is equivalent to $a^2+b^2>1$. This is an equation of a circle! And indeed, if you look at the figure above, you will notice that the blue region forms a quarter of a circle.

Relevant figure from the original study

You wanted to avoid discussing gender and brains, but I cannot help pointing out that looking at the full figure from the original article (Gur et al. 1999), one can see that whereas there is no gender difference in verbal IQ score, there is an obvious and significant difference in spatial IQ score! Compare subplots D and F. 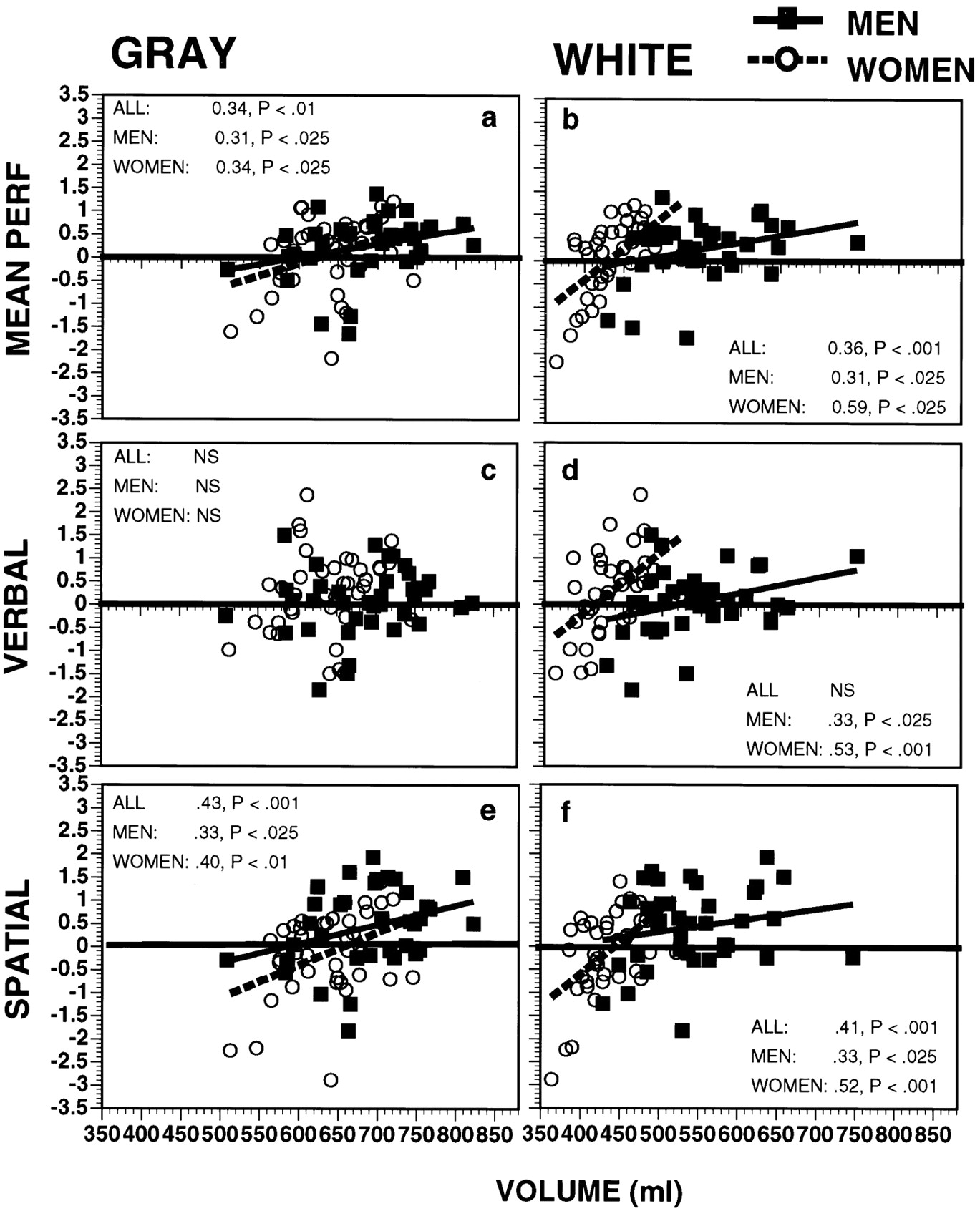 In response to comments I have updated somewhat the answer above. Now, what can we make of this? According to the calculations above, a correlation of 0.9 between IQ and brain volume (much larger than empirical). Then, the correlation between gender and IQ must be at least 0.62. What does that mean? In the comments some say this does not imply anything about mean differences between gender. But that cannot be true! Yes, for normally distributed variables we can assign correlation and means without relations. But gender is a zero-one variable, for such variable there is a relation between correlation and mean differences. Concretely, IQ is (say) normally distributed, while gender is discrete, zero-one. Let us assume its mean $p=0.5$ (realistically). Then a (say) positive correlation means that gender tends to be "higher" (that is, one) if IQ is higher. That cannot happen without there being a mean difference! Let us do the algebra: First, to simplify the algebra, let us center IQ at zero instead of the usual 100. That will not change any correlations or mean differences. Let $\mu_1 = \text{E}(x_1 | x_2=1)$ and $\mu_0 = \text{E}(x_1 | x_2=0)$. With $\mu=\text{E}(x_1)$ this means $\mu=0=\mu_1+\mu_0$ since $\mu_0 = -\mu_1$. We have $x_1 \sim \text{N}(\mu=0, \sigma^2)$ and $x_2$ is Bernoulli with $p=1/2$.
$$ \text{corr}(x_1, x_2) = \frac{\text{E}(x_1-\mu)\text{E}(x_2-p)}{\sigma \cdot \frac12} \\ = \frac{\Delta}{2\sigma} $$ where $\Delta = \mu_1 - \mu_0 = 2\mu_1$. With the usual value (for IQ) $\sigma=10$ this gives that the correlation is equal to $\Delta/20$. So a correlation of 0.62 means an IQ difference of 12.4. So the posters claiming the correlation contain no information about IQ mean difference are wrong! That would be true if gender was a continuous variable, which it obviously not is. Note that this fact is related to the fact that for the binomial distribution, variance is a function of the mean (as it must be, since there is only one free parameter to vary). What we have done above is really extending this to covariance/correlation.

But, according to the OP, the true value of $\rho=0.33$. Then the inequality becomes that $\lambda \ge -0.7822$, so $\lambda=0$ is a possible value. So in the true case, no conclusions about mean differences in IQ can be drawn from the correlation between IQ and brain volume.

This is a situation in which I like using path diagrams to illustrate direct effects and indirect effects, and how those two impact the overall correlations. 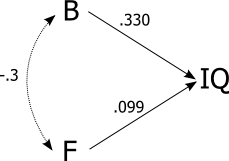 Because the total effect is zero, we know that the direct effect must simply be the exact opposite sign and size of the indirect effect, hence the direct effect equals 0.099 in this example. Now, here we have a situation when assessing the expected IQ of females we get two different answers, although probably not what you initially expected when specifying the question. When simply assessing the marginal expected IQ of females versus males, the difference is zero as you defined it (by having a zero correlation). When assessing the expected difference conditional on brain size, females have a larger IQ than males.

You can insert into this example either larger correlations between brain size and IQ (or smaller correlations between female and brain size), given the limits kjetil shows in his answer. Increasing the former makes the disparity between the conditional IQ of women and men even greater in favor of women, decreasing the latter makes the differences smaller.

To provide the purely abstract mathematical answer, denote $v$ the brain volume and $q$ the IQ index. Use $1$ to index men and $2$ to index women. Let's assume that the following are facts:

Note that while the quoted text talks about "correlation between brain volume and IQ" in general, the supplied image makes a distinction with the two trend-lines (i.e. it shows the correlation for the two subgroups separately). So we consider them separately (which is the correct way to go).

Then it must be the case that

Well, it certainly can be the case, that inequalities $(5)$ and $(6)$ hold at the same time, and so "equal IQ on average" is perfectly compatible with the initial assumptions that we took as facts.
In fact it could very well happen that we could have a higher average IQ from women than for men, for the same set of facts in $(1)$.

Not the answer you're looking for? Browse other questions tagged correlation categorical-data mean descriptive-statistics neuroscience or ask your own question.

0
Transitivity of Pearson's Correlation relationship - when does it (not) occur?
56
Software for drawing bayesian networks (graphical models)
16
Is this possible that $Cor(X, Y)=0.99$, $Cor(Y, Z)=0.99$ but $Cor(X, Z)=0$?
8
Is it possible for two random variables to be negatively correlated, but both be positively correlated with a third r.v.?
2
Can two random variables, both of which are dependent on a 3rd random variable, be independent of each other?
1
Non-positive definite matrix problem for desired correlation structure
1
correlation b/w continuous and binary variables
0
What is the relationship between "significant difference" and "correlation"?
0
Is covariance a measure of effect size?
1
Can we combine two groups to enhance power for analysis if there are no group differences on the variables?
See more linked questions