Is it valid to use a model-variogram fit not on the full range of lag distance?

The variogram of the residuals is plotted below. Depending on the x-scale, I get two different pictures of the same variogram:

Is it still valid to use the fitted exponential variogram for ordinary kriging? 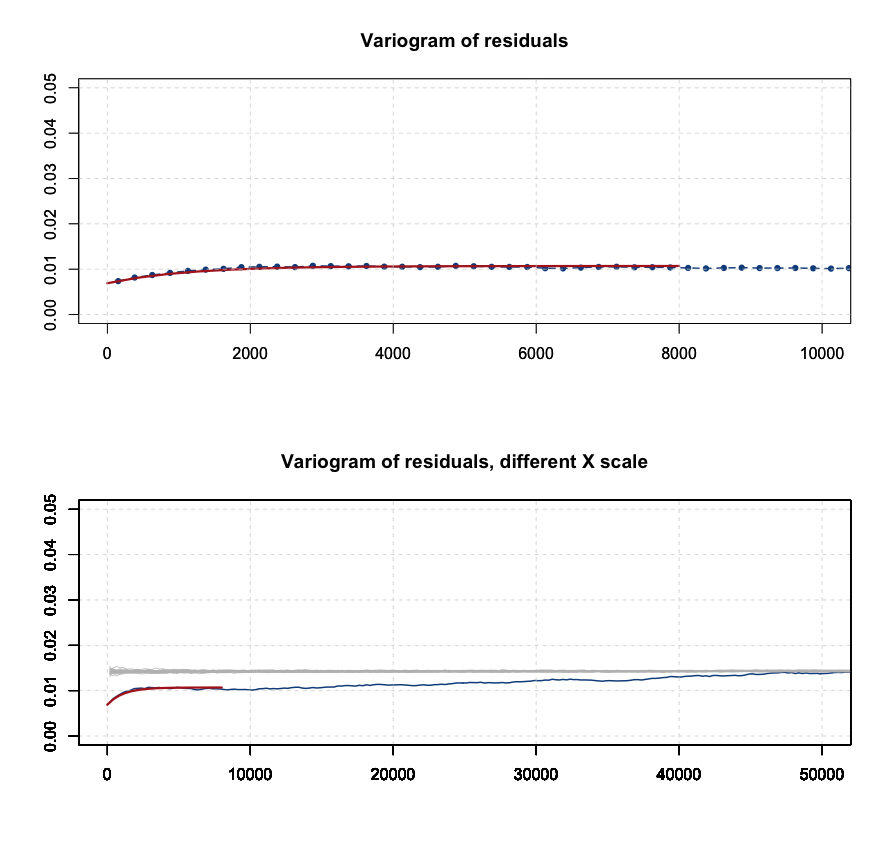 Extra info of the plot:

Ordinary kriging (OK) uses least squares methods to make predictions of values at unsampled locations. The model variogram provides information about the correlations among all locations, both sampled and unsampled.

It is well known that the results of OK depend most on the variogram values at the smallest lags (distances between locations), which also tend to be its smallest values (denoting greatest correlation).

The lack of local variation in the experimental variogram shown in the graphics suggests it is based on a very large number of data points. Over a 300 by 80 km region, that would translate to inter-point distances of a few kilometers or less. When kriging with local search neighborhoods, then, it would be unlikely to use points more than around 10 kilometers away.

Another consideration is that the experimental variogram appears to reach a "sill" quickly, by about 2000 meters (two kilometers). This indicates that almost all the improvement available by using OK will be accomplished in predicting values at points within 2000 meters or less of data points.

All these thoughts suggest there is little or nothing to be gained by attempting to fit the variogram model to data out to 50 km, and likely nothing is gained even by looking more than two to five km out. Instead, attention should be focused at obtaining the best possible fit of the model to the data within the first two km.

Given there are so much data, it would be worthwhile to construct directional model variograms rather than using a single (isotropic) variogram for this model. Another approach, when there are plenty of data, is to explore the possibility that the variogram changes across the study area--that is, to drop the assumption of stationarity.

Variography has great value as an exploratory tool. Exploration is carried out visually, in part by looking at plots of the experimental and model variograms. Unfortunately, the expanded vertical axes in these plots prevent close examination of either variogram. Limiting the upper values to about $0.015$ will triple the vertical resolution and make it much easier to see the data.

Not the answer you're looking for? Browse other questions tagged spatial geostatistics kriging or ask your own question.

4
Fitting a variogram model with the pairwise distance matrix supplied
3
Gstat: Modelled semivariogram values not matching plotted model using the variogramLine function
1
Kriging: fit.method and dX argument in variogram
7
What is the nugget effect?
1
Which is the best model for explaining spatial distance between points?