What's the intuition behind the estimation of Q, R in a scalar (one-dimension) Kalman Filter

An intuitive explanation with some math derivation is preferred. Pure mathematical equations are not helpful.

Q and R will be used in the recursive calculation as follows. 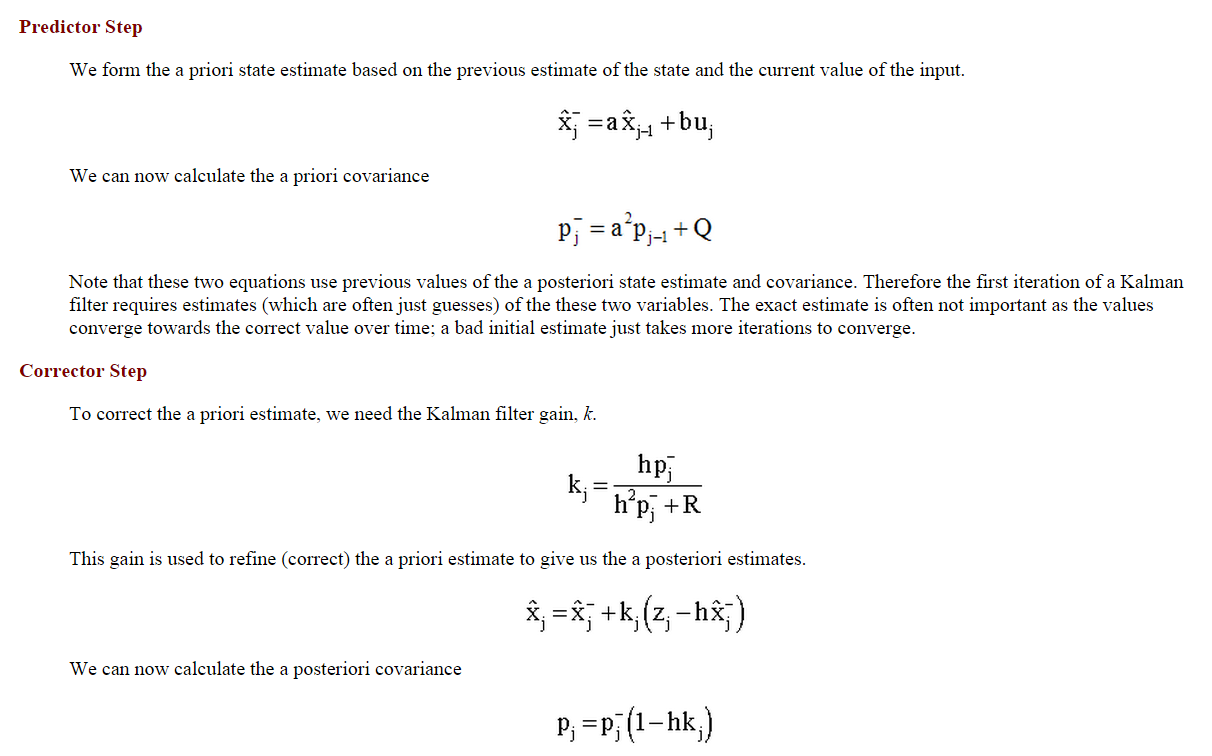 Please note I am only asking about one-dimensional Kalman Filter, ie. only estimating one variable.

I will be relatively crude with my explanation in an attempt to forego some mathematical nuances. Here I will assume that your state space model is the general linear Gaussian one and that

where $\alpha_{t}$ is our unknown state vector at time step $t$, $y_{t}$ the observation vector etc. Our disturbances/error densities $\epsilon$ and $\eta$ are assumed to be Normally distributed and add noise to our state space model.

If you look at the prediction step of the Kalman Filter recursion, you will see that the prediction step is linearly dependent on the covariance of the process noise $Q_{t}$, and that the update step is linearly dependent on the inverse of $H_{t}$. What does this mean? Well, crudely, the covariances will determine how the state changes in each of these steps (prediction and update) will change.

Let us take a 1D univariate model and neglect $H_{t}$ for now. If you take a too large value for $Q_{t}$, the prediction step with change dramatically with each iteration. If the value of $H_{t}$ is set too large, the model will be slow to respond to new observations. So it is clear that the choice of the covariances will have a direct effect on the predictions/updates and model performance. So, what we are after are optimal values for $H_{t}$ and $Q_{t}$, that is values that will optimise how the state changes during the prediction/update recursion in order to represent the true underlying process.

The optimisation of these parameters is what the "parameter estimation" process does. It attempts to maximise the likelihood function (LF) (often simply the likelihood) which is a function of the parameters of a statistical model. The likelihood of a set of parameter values and given outcomes, is equal to the probability of those observed outcomes given those parameter values. Again crudely, during the parameter estimation process the Kalman Filter is run many times whilst updating $H_{t}$, $Q_{t}$ and attempting to maximise the LF. When the LF is maximised (converged to a constant value) we have the optimum values of our covariances/parameters for that state space model.

Not the answer you're looking for? Browse other questions tagged kalman-filter or ask your own question.