I am planning to predict a binomial variable (1/0, a used point by an animal or point available to an animal in its range) using several continuous, distance-based predictor variables (distance to habitat type) and interactions (whether that habitat was available to an animal in its range). The data for each predictor variable are non-normal. I will use SAS to perform a binomial GLMM with a logit link.

Several sources (e.g., Gelman and Hill 2007) suggest that standardizing predictors by subtracting the mean and dividing by two standard deviations prior to including them in the model can help interpret parameter estimates, especially when interactions are present (but here, Variables are often adjusted (e.g. standardised) before making a model - when is this a good idea, and when is it a bad one?, @bluepole disagrees).

I read these two posts: Standardizing non-normal data for use in distance-based classifier and Standardizing data, but I didn't find a satisfactory answer to my question: Is it appropriate or acceptable to "standardize" non-normal data using the mean, when we all know that non-normal data aren't well represented by that mean? If it isn't appropriate, what are my options? Could I use the median and quantiles in a similar way? Or would I attempt to (this is getting messy) transform the data to a normal distribution and then try to standardize (yuck).

Mirkin's book (Clustering for Data Mining: A Data Recovery Approach, 2005) suggests that means and standard deviations may not be appropriate for scaling... 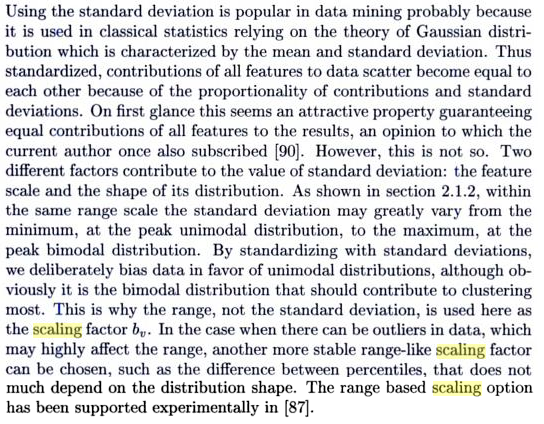 The predictor variables do not need to be transformed or standardized. The standardization can sometimes help with interpretation or comparing effect size between predictors, but is not needed.

Without dividing the predictors by anything, the coefficient represents the change in the log-odds (exponentiate for the odds ratio) for a 1 unit increase in the predictor while holding everything else constant. The only way to hold an interaction term constant while increasing one of the variables included in the interaction is when the other variable is fixed at 0, so this is part of the justification for centering/scaling/normalizing, you can think of the main effect slope in terms of a 1 unit increase while holding everything else at the mean/median/whatever. In general it is difficult to really understand the effects of individual variables by their slopes when there are interactions or transformations, better is to make predictions at meaningful values of the predictor variables and create a table and/or graph to show how the predictions change with the predictors. Scaling a predictor variable is most meaningful when the units that the variable are measured in are different from a meaningful differences, for example if you measure time in days but the observed times range over 10 years then looking at the effect of increasing time by one day is probably less meaningful than looking at the effect of changing time by 1 year (or month, or decade, or ...), so scaling by something like 365 or 365.24 will be more meaningful. Scaling by a standard deviation will put you in a reasonable scale, but it may be more difficult to interpret than a fixed value. Dividing by something like the inter quartile range will have a similar effect (and may be easier or harder to interpret/explain). If you scale I would suggest scaling by something with some scientific meaning rather than something derived solely from the data.

Transforming a predictor to normal without any other justification is just going to complicate any interpretation without gaining anything useful.

I am going to sum up the comments that helped me make a final decision and post what I've decided to do in the end. I want to be able to compare my regression coefficients to each other and want to ensure that regression coefficients are sensible (without standardizing, they are very small). My predictor variables are of the same measurement unit (kilometers) but differ in scale by orders of magnitude. Also, Ben Bolker pointed out that standardizing helps with numerical stability if the model is difficult to fit. Greg Snow noted that the slopes on normalized values will be more constant and comparable when data are standardized. This is very important in my analysis.

I wanted to come as close to standardizing by subtracting the mean from each value and dividing by 2 standard deviations, as suggested in Gelman and Hill 2007. However as Greg Snow pointed out in comments, this gets a bit questionable when input data have some skewness (which my data do).

In the end I've decided to standardize by subtracting the median from each value and dividing by 1.5 * the interquartile range (IQR). This is approximately equal to standardizing as above if the distributions are normal, but is likely more appropriate for data that are not normal. (See http://www.physics.csbsju.edu/stats/box2.html: IQR = 1.35*standard deviation).

Not the answer you're looking for? Browse other questions tagged standard-deviation mean glmm normal-distribution or ask your own question.

58
Variables are often adjusted (e.g. standardised) before making a model - when is this a good idea, and when is it a bad one?
0
Standardizing data
2
Standardizing non-normal data for use in distance-based classifier