Why is the optimal policy in Markov Decision Process (MDP), independent of the initial state?

I was following the reinforcement learning lecture notes on CS229 (which can be referenced for the notation I am using in this question):

and I had a question about the following paragraph:

My specific question was, why is it that $\pi^*$ has the property that its the optimal policy for all states? I guess that he didn't prove it on his notes because its obvious for him, but why is that true? Is there a proof of that somewhere? Or does someone know at least some intuitive argument for it?

I am just very surprised, because it seems very counter intuitive, specially because of the way the optimal value function is defined on page 4.

The way I understand it is that, its the best possible expected sum of discounted rewards that can be attained by using any policy. However, it is seems to be that its a function of s and for each s we maximize over $\pi$. So how come we don't end up with a different optimal $\pi$ for each state?

For more notation relevant to my question read bellow (or read page 4, or from page 4 to page 1 of the notes I linked):

Recall what the value function is:

which is the expected sum of discounted rewards upon starting in state s and taking actions according to the given policy $\pi$ (note $\pi$ is not a r.v. but a "fixed" parameter mapping states to actions).

On page 4 of CS229 notes, it defined the following quantities:

Thus, we can re-write bellman's equations with this "best" valued function:

which says that the best value function for state s is the initial reward plus the reward from the action that maximizes our weighted future pay-off. i.e. plus the reward of doing the best thing now that would make us get the best pay-off in the future.

From that we see that we can get the best policy by "extracting" the best action for each state according to the equation above:

The it states that for ever state and every policy $\pi$ we have:

The intuition behind the argument saying that the optimal policy is independent of initial state is the following:

The optimal policy is defined by a function that selects an action for every possible state and actions in different states are independent.

Formally speaking, for an unknown initial distribution, the value function to maximize would be the following (not conditioned on initial state)

where $A_s$ is the set of actions available at state $s$. Note that the third equation is only valid because $x_0(s)\geq 0$ and we can separate the decision policy by selecting independent actions at different states. In other words, if there were constraints for example on $x_t$ (e.g., if the optimization only searches among policies that guarantee $x_t \leq d$ for $t>0$), then the argument is not valid anymore and the optimal policy is a function of the initial distribution.

why is it that $π^∗$ has the property that its the optimal policy for all states?

This is actually because of Markov property of environment. Markov property states that the history of previous states and actions leading to state $s$ does not affect $R(s)$ and $P_{sa}(s')$. So in any state s, the optimal policy for that state can only consider $\forall a: R(s, a), P_{sa}(s')$ without considering how it has reached s.

I didn't dive in the details for quite some time, but it appears very intuitive to me that $π^∗$ is valid for all states if you take practical examples.

The case of solving a maze is one of these: the agent is (potentially randomly positioned) in a maze and is trying to get out of it. It gets rewarded only when it finds the exit (first image). Through experiences and propagation of the reward, it will learn what path to choose from any position (second image). So the optimal policy does provide the best direction (action) choice for any position (state).

Of course, a more thorough explanation through the math is still due ;-) 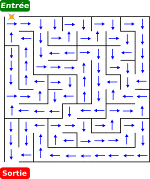 Perhaps, one should view the optimization process taken over the space of functions span by the admissible policies, however explicitly described by the MDP definition.

probabilities could always be forced to follow the strict more explicit notation of functions of many variables from general mathematics. All moments could also always be made explicit integrals of many variables (or discrete versions of it). But, the probability space does add some extra structure into the set of such multi-variable functions. And since whatever mathematical object in the space of dependent variables is the focus of all this machinery, you could bet that you might have to consider various partial integrals, probability oblige, unless you want to forgo the extra structure that Bayes theorem provides. It is a bit like the complex plane: would look like R2, if there was not that quirky relationship between the dimensions. this is just an analogy.

my point, is that given the multivariate interactions, some shortcuts become inevitable for the sake of readability. However, care should be taken to systematically be aware and make the readers aware that shortcuts have been taken, in notations, specially when communicating with multidisciplinary audiences, and various notation expectations or fluency that come with that. (or just to not get lost oneself...)

I am not finished, there is an additional twist that I need to mention to make the above relevant to this thread: MDP are considered to answer a restricted class of mathematical problems, they impose the question of finding some non-empty subset of optimal policies in the valuation sense. So we are going to be optimizing of space of policies (they become points, variables themselves, hence the confusing subscript, compress into one symbol meaning not a value, but a function as conditioned variable. Does this make sense?

Maybe some body should tweak what I tried to say. if too bad, I could make it wiki, for those who get my intent, that is.

I just thought this was relevant because I sensed that part of the difficulty lies in different notation assumptions/expectations per individual involved (include original authors). I may be wrong. let's see.

2
Do these two Bellman equations express the same idea?