Interpretation of cartesian product of the support of marginal distribution

We should note that the domain separability assumption refers to the condition that the convex support of the joint density of sources can be written as Kronecker product of the convex supports of the individual source marginals. The domain separability assumption essentially implies that the boundaries of the values that a source can take is not dependent on the values of other sources, and is a necessary condition for the mutual independence of sources.

I need help breaking this down.

After some more research I found this image which visualizes some of the concepts. 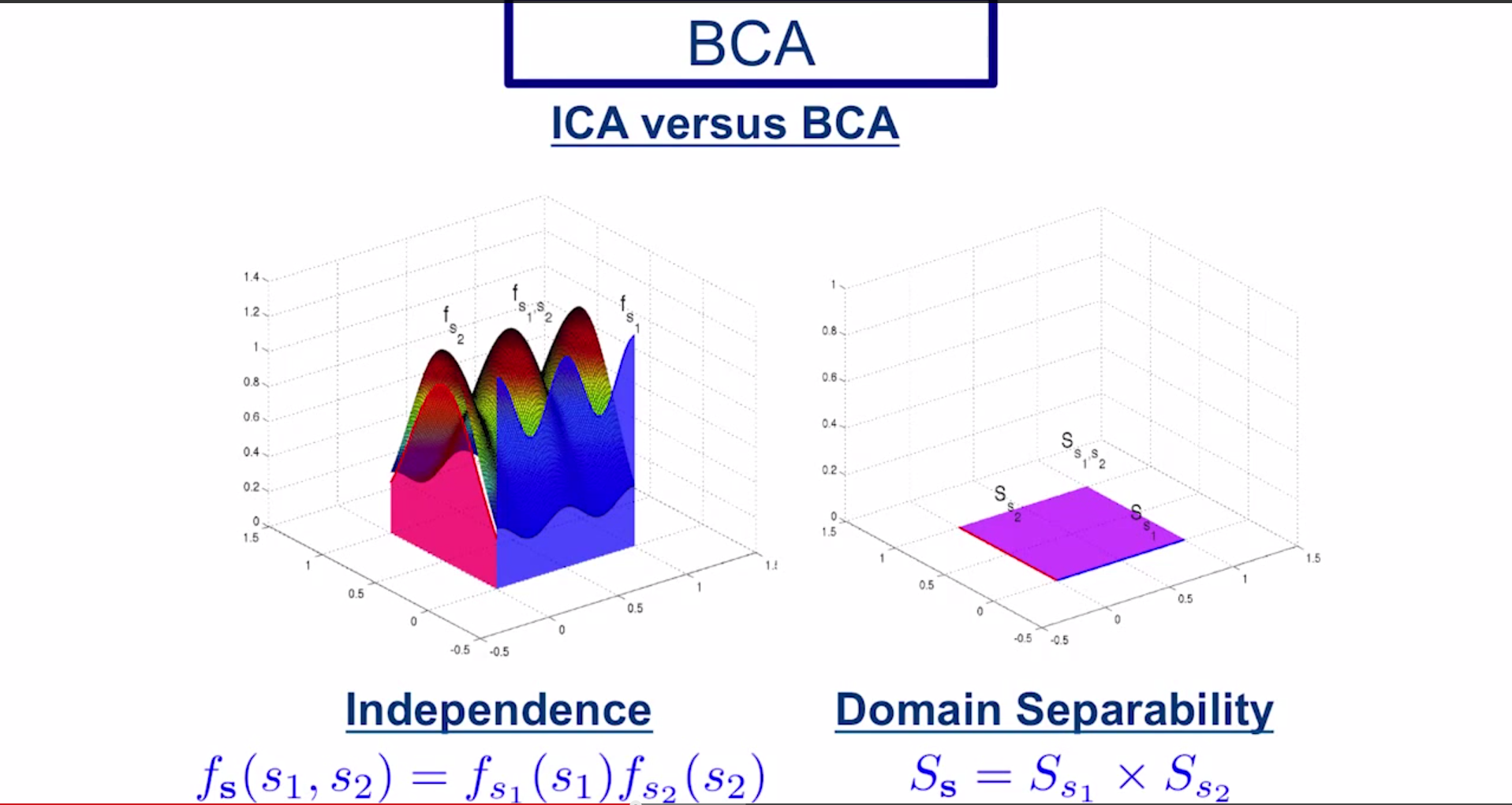 The difference between domain separability and independence is that independence forces your joint pdf to be a certain shape, while domain separability only forces your joint pdf to be in a certain region. My interpretation is that since $S_s$ is the support of the new region ($S_{S_1,S_2}$) in the figure, it is assumed that the joint pdf must be non-zero in this region?

The "convex support" is the convex hull of the support. For instance, for the PDF shown at the bottom right of the figure, the support (defined as the smallest close set containing all values with probability $1$) is the union of the disjoint intervals $[0,1/3]$ and $[2/3,1].$ Its convex hull (defined as the smallest convex set containing it) is the interval $[0,1]:$ we have to include the numbers intervening between $1/3$ and $2/3$ to assure convexity.

Consider distributions defined over the unit square $[0,1]\times [0,1]\subset\mathbb{R}^2,$ shown in the upper left plot of the figure.

Let's work with the distributions that are uniform over the blue triangles shown. Specifically, for any $0 \le t \lt 1,$ let the density (PDF) be constant within the region $|x-y| \ge t$ (shown in blue) and zero elsewhere. The support of such a distribution is a union of two triangles.

Notice that the convex support of the joint distribution is the unit rectangle only for $t=0.$ For larger $t,$ the smallest convex set containing the two blue triangles is a hexagon. These hexagons comprise the blue triangles and the gray intervening rectangles, all with dotted black outlines.

These provide clear examples where the Cartesian product of the marginal supports is strictly greater than either the joint support or the joint convex support. In particular, the joint density can be zero throughout a substantial portion of its convex support.

If you are concerned primarily about convex supports, you can construct a variant of these examples in which the joint distribution also includes triangles at the upper right and lower left corners, thereby making the convex support equal to the entire unit square.

(BTW, these are all examples with compact support, which is what I think the question must mean by "finite" support. Distributions with finite supports would necessarily be discrete and notions of convexity wouldn't be appropriate for them.)

If he really means Cartesian product, it is easy. The assumption that the joint support is the Cartesian product of the marginal supports sets, simply means there is no logically necessary relations between the variables.

They might be independent or dependent. However, if the joint support is not the Cartesian product of the marginal supports, then the variables are necessarily dependent and independence is ruled out.

Not the answer you're looking for? Browse other questions tagged distributions pdf joint-distribution marginal or ask your own question.