Are the model residuals well-behaved (homoscedasticity)?

Can I say looking at this residuals-vs-fitted plots, that my residuals are homoscedastic? 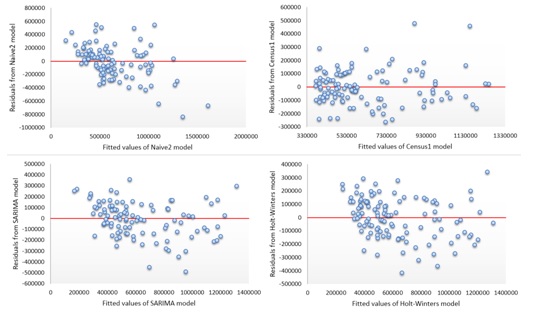 1) Some of your plots may indicate some heteroskedasticity (for example, the plot at the bottom right), but you should worry about potential issues with the conditional mean first.

(Can you say more about what the models are? Are you fitting models without an intercept?)

2) looking at a plot doesn't tell you the conditional variance is constant against fitted values; if the spread in the plot looks constant, it only gives you some idea that the variance may not differ very much.

3) Even if the variance looked constant against the fitted value, that doesn't mean the variance is homoskedastic.

For example, consider a case where the response moved down then up $\text{\/}$ (say $E(y)=\beta_0+\beta_1\operatorname{abs}(x-m)$ say, for some known $m$), and where the variance was wider on the right half than on the left half. Consider also that we use abs(x-m) as a predictor in the model.

Then the plot against fitted values would superimpose the two different halves of the residual distributions. So the conditional variance is not constant -- but it wouldn't show in the plot of residuals vs fitted values:

The spread of residuals against fitted is constant -- but that doesn't mean that all the observations have the same variance!

That left-hand plot can diagnose a particular kind of heteroskedasticity. It's useful because heteroskedasticity is very often related to the mean - but not having any sign of changing variance in the plot doesn't imply the variance is actually close to constant; it just may happen in a way that the plot won't show.

So for several reasons, we really can't declare that the errors (or indeed the residuals) are homoskedastic, no matter how good the plot of residuals vs fitted looks.

I would say that only the north-east model looks sort of OK. The north-west model shows downward trend, so there's something not quite accounted for in it. The two models in the bottom row both show a U-shape, so some nonlinear terms are missing from it. When there are main effects in the residuals, it is hard to talk about heteroskedasticity.

I heard somebody say, but I don't have the exact quote, that at $n=100$, human eye has about as much power in detecting problems with the residuals as the formal tests do. May be formal tests should be added to these graphs, too.

Not the answer you're looking for? Browse other questions tagged residuals heteroscedasticity diagnostic or ask your own question.

13
Why are diagnostics based on residuals?
43
Interpreting the residuals vs. fitted values plot for verifying the assumptions of a linear model
9
How do residuals relate to the underlying disturbances?
2
General linear model and residuals
7
Homoscedasticity Assumption in Linear Regression vs. Concept of Studentized Residuals
7
In linear regression, why are raw least squares residuals heteroskedastic?
7
Why do I see a pattern in the residuals in this well specified model?