how is the 2/3 rule effected by a skewed distribution with a zero point? [closed]

If my SD makes one standard deviation below zero and negative, where the data does not go, then does the 2/3 rule stand with 68% between zero and 1 SD and is the missing negative data -1 SD and - 2 SD weight in percent transferred to + 1 and + 2 SD holding 14 percent not 7 and so on.

The assumptions that underlie your question are misplaced.

That proportion doesn't apply in general. It's sometimes presented as applying to samples from a normal distribution. In sufficiently large samples, it approximately applies (where 'sufficiently' depends on how 'approximately' you need).

You can in practice have any positive proportion strictly between 0 and 100% within one population standard deviation of the population mean. Similar* limits apply to calculations in terms of sample statistics.

* the $n-1$ denominator in the usual Bessel-corrected sample standard deviation makes a difference.

As we see, if we don't have normality, we don't necessarily have anywhere near 68% within 1 sd of the mean. Since the distribution is skewed, it's plainly not normal, so there's no good reason to expect anything remotely close to 68% of the data to be within 1 sd.

Some skewed distributions may get reasonably close to that 68% figure, but 'skewed' doesn't tell us if we're near one of those cases.

The exponential distribution has 86% of its probability within one population 1 sd of the population mean, for example. That's actually a bit nearer to 1 than it is to 68%. 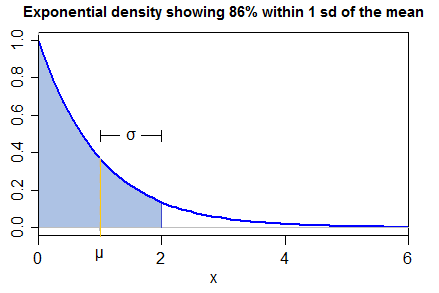 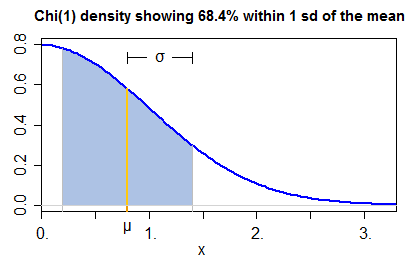 Still other distributions may show a fair bit more or less.

Not the answer you're looking for? Browse other questions tagged distributions or ask your own question.

3
Standard deviation to describe variation in positively skewed data?
2
Empirical Rule. Is it applicable/usable in this case?