I created a software platform on which about 110 participants could contribute at any time of their choosing over the course of 12 weeks (think something like a wiki). These participants were then randomly split to use one of two otherwise identical platforms. One key difference was implemented between the two platforms, which I hypothesized to cause a different participation rate.

That means I have participation data over the course of 12 weeks (down to the second) for 2 groups of ~50 people. The participation rate is highly variable - some folks don't participate for 4 weeks at a time and then participate heavily at the end. Others participate in the beginning and then never again.

Independent-samples t-tests show differences between the conditions in terms of total number of times participating. But I don't think that's the most informative. I want be able to run a statistical test to show that the difference I implemented led to an increased participation rate over time.

Some tricky parts of this:

Things I have considered:

Is there another approach I should take here? Am I missing something that will handle this better?

Edit: I have log-ins, but didn't think of that as meaningful - these are more meaningful participation events. Here is a graph of the cumulative weekly participation events by group, which might help illuminate what I'm talking about. This is the most meaningful metric I can come up with. Note that in this graph, individuals might be represented several times (if a three users participated 30 times, twice and once during Week 1, that increases Week 1 by 33). 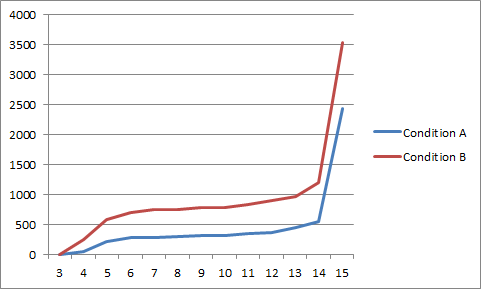 Here are a few thoughts:

Assess effect of condition of participation

Here are my two cents:

Not the answer you're looking for? Browse other questions tagged repeated-measures normality-assumption multilevel-analysis count-data non-independent or ask your own question.