I've read numerous definitions and mathematical equations, but that does not really help. (Please keep in mind, I am undergraduate student studying econometrics.)

How can a random number converge to a constant?

Now, if you keep pulling the balls, at some point there'll be no balls left in the box, and you'll get $\bar x_N\equiv\mu$.

So, what we've got is the random sequence $$\bar x_1,\dots,\bar x_k, \dots, \bar x_N ,\bar x_N, \bar x_N, \dots $$ which converges to the constant $\bar x_N = \mu$. So, the key to understanding your issue with convergence in probability is realizing that we're talking about a sequence of random variables, constructed in a certain way.

It's not clear how much intuition a reader of this question might have about convergence of anything, let alone of random variables, so I will write as if the answer is "very little". Something that might help: rather than thinking "how can a random variable converge", ask how a sequence of random variables can converge. In other words, it's not just a single variable, but an (infinitely long!) list of variables, and ones later in the list are getting closer and closer to ... something. Perhaps a single number, perhaps an entire distribution. To develop an intuition, we need to work out what "closer and closer" means. The reason there are so many modes of convergence for random variables is that there are several types of "closeness" I might measure. 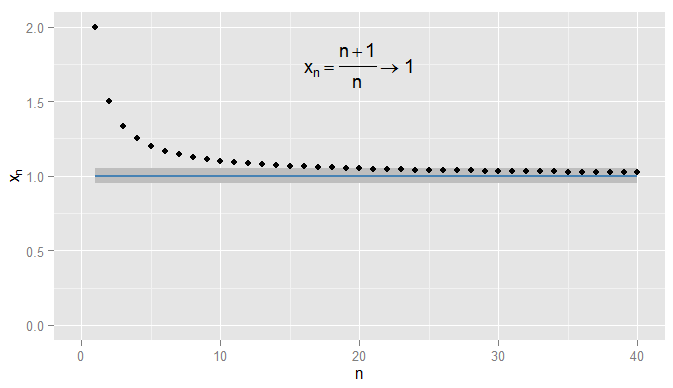 I could be stricter and demand terms get and stay within $0.001$ of $1$, and in this example I find this is true for the terms $N=1000$ and onwards. Moreover I could choose any fixed threshold of closeness $\epsilon$, no matter how strict (except for $\epsilon = 0$, i.e. the term actually being $1$), and eventually the condition $|x_n - x| \lt \epsilon$ will be satisfied for all terms beyond a certain term (symbolically: for $n \gt N$, where the value of $N$ depends on how strict an $\epsilon$ I chose). For more sophisticated examples, note that I'm not necessarily interested in the first time that the condition is met - the next term might not obey the condition, and that's fine, so long as I can find a term further along the sequence for which the condition is met and stays met for all later terms. I illustrate this for $x_n = 1 + \frac{\sin(n)}{n}$, which also converges to $1$, with $\epsilon=0.05$ shaded again. 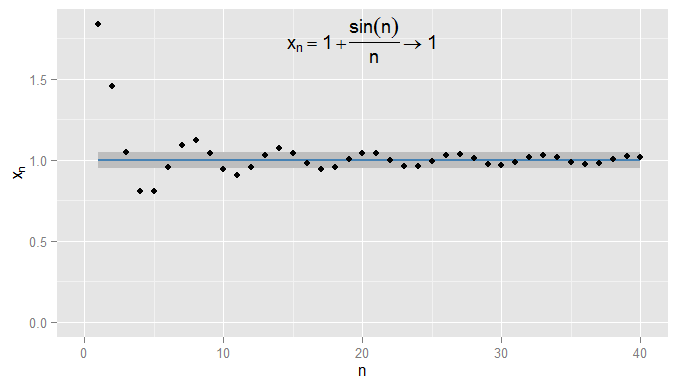 A different sense in which $X_n$ becomes closer to $X$ is that their distributions look more and more alike. I can measure this by comparing their CDFs. In particular, pick some $x$ at which $F_X(x) = P(X \leq x)$ is continuous (in our example $X \sim U(0,1)$ so its CDF is continuous everywhere and any $x$ will do) and evaluate the CDFs of the sequence of $X_n$s there. This produces another sequence of probabilities, $P(X_1 \leq x)$, $P(X_2 \leq x)$, $P(X_3 \leq x)$, $\dots$ and this sequence converges to $P(X \leq x)$. The CDFs evaluated at $x$ for each of the $X_n$ become arbitrarily close to the CDF of $X$ evaluated at $x$. If this result holds true regardless of which $x$ we picked, then $X_n$ converges to $X$ in distribution. It turns out this happens here, and we should not be surprised since convergence in probability to $X$ implies convergence in distribution to $X$. Note that it can't be the case that $X_n$ converges in probability to a particular non-degenerate distribution, but converges in distribution to a constant. (Which was possibly the point of confusion in the original question? But note a clarification later.)

In my mind, the existing answers all convey useful points, but they do not make an important distinction clear between the two modes of convergence.

If $X_n\overset{p}{\to}Y$, we have, by definition, that the probability of $Y$ and $X_n$ differing from each other by some arbitrarily small amount approaches zero as $n\to\infty$, for as small amount as you like. Loosely speaking, far out in the sequence of $X_n$, we are confident $X_n$ and $Y$ will take values very close to each other.

On the other hand, if we only have convergence in distribution and not convergence in probability, then we know that for large $n$, $P(X_n\leq x)$ is almost the same as $P(Y\leq x)$, for almost any $x$. Note that this does not say anything about how close the values of $X_n$ and $Y$ are to each other. For example, if $Y\sim N(0, 10^{10})$, and thus $X_n$ is also distributed pretty much like this for large $n$, then it seems intuitively likely that the values of $X_n$ and $Y$ will differ by quite a lot in any given observation. After all, if there is no restriction on them other than convergence in distribution, they may very well for all practical reasons be independent $N(0,10^{10})$ variables.

(In some cases it may not even make sense to compare $X_n$ and $Y$, maybe they're not even defined on the same probability space. This is a more technical note, though.)

If you're learning econometrics, you're probably wondering about this in the context of a regression model. It converges to a degenerate distribution, to a constant. But something else does have a non-degenerate limiting distribution.

$\hat{\beta}_n$ converges in probability to $\beta$ if the necessary assumptions are met. This means that by choosing a large enough sample size $N$, the estimator will be as close as we want to the true parameter, with the probability of it being farther away as small as we want. If you think of plotting the histogram of $\hat{\beta}_n$ for various $n$, it will eventually be just a spike centered on $\beta$.

In what sense does $\hat{\beta}_n$ converge in distribution? It also converges to a constant. Not to a normally distributed random variable. If you compute the variance of $\hat{\beta}_n$ you see that it shrinks with $n$. So eventually it will go to zero in large enough $n$, which is why the estimator goes to a constant. What does converge to a normally distributed random variable is

$\sqrt{n}(\hat{\beta}_n - \beta)$. If you take the variance of that you'll see that it does not shrink (nor grow) with $n$. In very large samples, this will be approximately $N(0, \sigma^2)$ under standard assumptions. We can then use this approximation to approximate the distribution of $\hat{\beta}_n$ in that large sample.

But you are right that the limiting distribution of $\hat{\beta}_n$ is also a constant.

Let me try to give a very short answer, using some very simple examples.

10
In convergence in probability or a.s. convergence w.r.t which measure is the probability?
163
Bottom to top explanation of the Mahalanobis distance?
3
What's the difference between Gaussian and Bernoulli?
9
Topologies for which the ensemble of probability distributions is complete
3
Requesting Intuitive Explanation to Covariance, Correlation and Standard Deviation
6
About Sampling and Random Variables
2
The definitions of estimator and estimate
4
distribution of maximum random walk distance
9
Convergence in distribution to a degenerate distribution