Basic question: In a two independent sample test of differences in means, is it possible to have a one sided hypothesis?

Typically, when you have 2 groups the two sample test only tests whether the means are the different. But I would like to test whether 1 group is larger than the other.

Yes, certainly you can have a one-sided hypothesis test for equality of two means.

Most commonly people use a two-sample t-test for the equality of two means (with or without the Welch adjustment to d.f. for different variances), but there are alternatives, including a permutation test.

Here's an example, done in R on Fisher's sleep data: 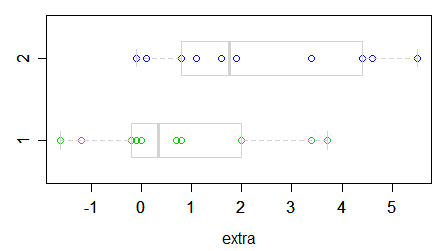 If you want to test whether the values tend to be larger in one population than another, in the sense that your alternative is of the form $P(X>Y)>\frac12$ then you could use a Wilcoxon-Mann-Whitney for that.

0
how to set up my one sample test