I try to implement k-means++, but I'm not sure how it works. I have the following dataset: 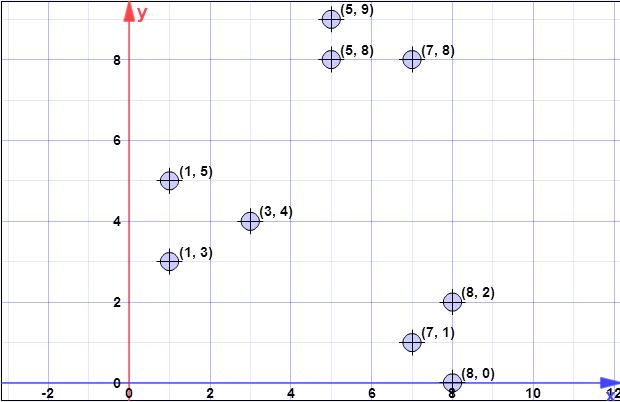 Could someone explain in detail how to calculate the 3rd step?

Here is my code, in Mathematica:

Here is how it works:

As you can see, the first data point chosen to be a center was (1,5), and the other points remained. Next, the point (7,8) was chosen and added to the list of centers, and so on.

The precise mathematics behind the third step is straightforward: For each point in data, find its distance to the nearest center, $d_i$. If there are $r$ elements currently in data, then you have $r$ distances--one for each point. The overall goal of kmeans++ is to choose new points from data that are FAR from existing centers, so we want to increase the probability of being chosen for points in data that are far from any center.

For each point in data, we compute its distance divided by $s_{tot}$ and set that to the probability that point will be chosen as a new, additional, center:

Notice that the sum of all $r$ probabilities will add up to 1.0, as is required for a true probability.

Now, we want to choose a new point in data proportional to its probability $p_i$. Because of how we computed $p_i$, points far from any center (i.e., with large $p_i$) are more likely to be chosen than points with small $p_i$---just as the algorithm wants.

You can implement such a probability proportional selection by dividing up the unit interval ($0 \rightarrow 1$) by segments of length $p_i$ and uniformly choosing a value between 0 and 1 and finding which interval (i.e., which point) the random selected value lands in.

This is a full, precise mathematical explanation of kmeans++. I cannot see that there is anything more needed to describe it, especially since the working code is present for all.

Choose one new data point at random as a new center, using a weighted probability distribution where a point x is chosen with probability proportional to $D(x)^2$.

Compute all the $D(x)^2$ values and convert them to an array of cumulative sums. That way each item is represented by a range proportional to its value. Then pick a uniform random number in that range and see which item it corresponds to (using a binary search).

For instance, you have:

Not the answer you're looking for? Browse other questions tagged k-means or ask your own question.