Why are “time series” called such?

Why are “time series” called such?

Series means sum of a sequence.

Why is it "Time Series", not "Time Sequence"?

This inconsistency bugged me too the first time I saw it! But note that outside mathematics, people often use "series" to refer to what mathematicians might call a sequence.

For example, the Oxford English dictionary online gives the main definition of "series" as a "number of events, objects, or people of a similar or related kind coming one after another". This is what is happening in a time series: you have a sequence of observations coming one after the other. This is equivalent to the usage of the word in such phrases as "TV series" (one episode after another), "series circuit" (the current flows through each component successively), the World Series (a sequence of baseball games one after the other) and so on.

The etymology of "series" comes from the early 17th century, "from Latin, literally 'row, chain', from serere 'join, connect'", which is quite instructive. It didn't originally have the meaning of summation, but I can't find separate citations that establish when the word "series" was first used for the sum of the terms in a sequence. In fact it's quite common, particularly in older mathematics textbooks, to see the word "series" used where you might prefer "sequence", and "sum of series" where you might prefer "series". I don't know when this terminology was standardised in its present form. Here's an extract on arithmetic and geometric progressions from Daboll's Schoolmaster's assistant, improved and enlarged being a plain practical system of arithmetic: adapted to the United States - Nathan Daboll's 1814 update to his 1799 original Daboll's schoolmaster's assistant: being a plain, practical system of arithmetic, adapted to the United States, which was one of the most popular mathematics education books in the US throughout much of the 19th century. 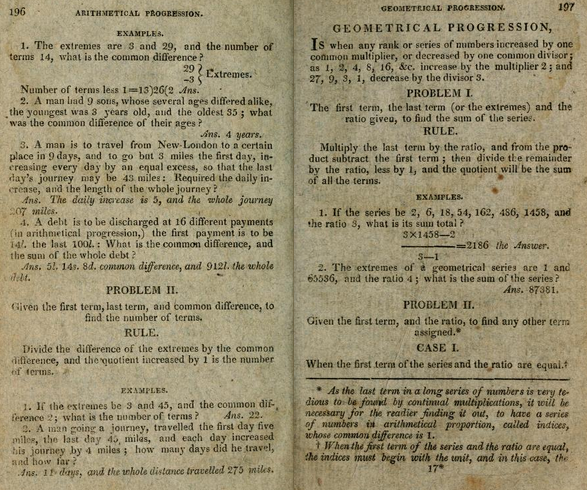 The whole of Daboll's Schoolmaster's Assistant is available at archive.org and makes fascinating reading; it is the mathematics textbook that Herman Melville refers to in Moby-Dick (1851) and according to The Historical Roots of Elementary Mathematics by Bunt, Jones and Bedient (Dover Books, 1988) was predominant in American schools until 1850. At some point I may check some later standard texts; I do not think the hard distinction between "sequence" and "series" in mathematics arose until rather later.

Is time the independent variable?

This is basically the right idea: for instance when you plot a time series, we normally show the observations on the vertical axis while the horizontal axis represents time elapsed. And certainly it's true you wouldn't regard time as a dependent variable, since that would make no sense from a causation point of view. Your observations depend on time, and not vice versa.

a group or a number of related or similar things (http://dictionary.reference.com/browse/series)

a number of things or events that are arranged or happen one after the other (http://www.merriam-webster.com/dictionary/series)

A number of objects or events arranged or coming one after the other in succession (http://www.thefreedictionary.com/series)

A number of events, objects, or people of a similar or related kind coming one after another (http://www.oxforddictionaries.com/definition/english/series)

Time series is a sequence of values "coming one after another". Series does not have to be a sum like in mathematics.

The accepted answer is informative (I upvoted it myself), but it assumes that the "series" term in Time Series is really a misnomer and should be "sequence" instead. For the first few decades in the development of time series analysis, 1920s and 1930s, time series was synonymous with ARMA time series. An MA time series is indeed a sum of a sequence of white noise innovations. An AR time series, if covariance stationary, is also a sum of a sequence of white noise innovations. It may well be that the name "series" in time series was very appropriately assigned to time series, when these were synonymous with ARMA time series, but as other types of time series were discovered, which did not have a similar representation as a sum, nobody went back to revise the term because it's been used for decades and it may have just stuck in the statistics community. (https://www.statistics.su.se/english/research/time-series-analysis/a-brief-history-of-time-series-analysis-1.259451)

Not the answer you're looking for? Browse other questions tagged time-series self-study references terminology or ask your own question.