I have been trying to find a simple, concise definition of what tail dependence is. Could anybody share what they believe it is.

Secondly, if i were to plot simulations using different copulas on a graph, how would I know which ones exhibit tail dependence.

the definition of upper tail dependence of r.v. $X$ and $Y$ with their respective marginal distributions F and G, is: $\lim_{u \to 1} P\{ Y>G^{-1}(u)|X>F^{-1}(u))=\lambda_u$ (Embrechts et al. (2001)). It is the probability that Y reaches extremely large values, given that random variable X attains extremely large values. Hence it can understood in a way that the closer the $\lambda$ is to one, the closer the link between X reaching high values and Y reaching large values as well.

Telling whether the copulas exhibits tail dependence is not hard in extereme cases: what matters is whether the (two) variables appear behave more closely in the corners of the graph than in the center.

The Gaussian copula does not have tail dependence - though the random variables are highly correlated, there seems to be no special relationship any of the variables reaches large values (in the corners of the chart). 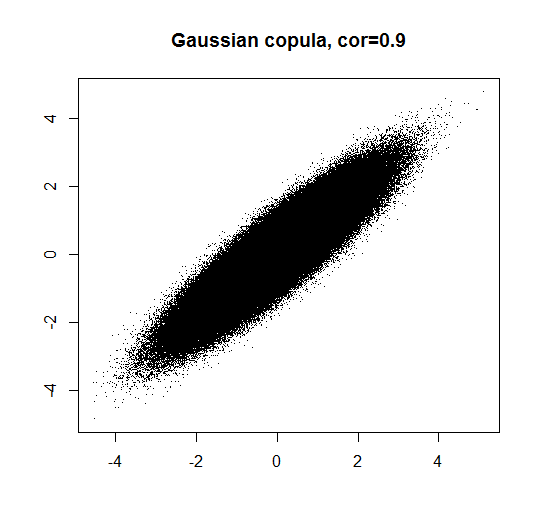 The absence of the tail dependence becomes apparent when the plot is compare to the plot of simulations from the same marginals but with T-2 copula.

T-copulas have the tail dependence and the dependence increases with correlation and decreases with the number of degrees of freedom. If more points were simulates, so that larger portion of the unit square was covered, we would almost see the points a thin line in the upper-right and lower-left corners. But even on the chart, it is apparent that in the upper-right and lower-left quadrants - i.e. where both variables attain very low, or very high values - the two variables appear to be even more closely correlated than in the body. 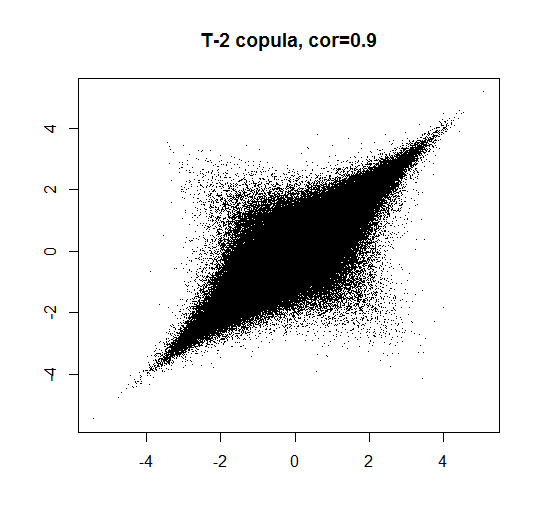 Financial markets tend to exhibit tail-dependence, especially lower tail dependence;. E.g. major stock returns in normal times have a correlation of, roughly 0.5, but in September/October 2008, some pairs had correlation of over 0.9 - they were both falling massively. The Gaussian copula was used before the crises for pricing of come credit products and since it did not account for the tail dependence, it under-estimated potential losses when many home-owners became unable to pay. A homeowners' payments may be understood as random variables - and they proved to be highly correlated in the moment when many people started having trouble paying their mortgages. Since these defaults were closely related due to an adverse economic climate, the agains showed a tail-dependency.

Tail dependence is when the correlation between two variables increases as you get "further" in the tail (either or both) of the distribution. Compare a Clayton copula with a Frank copula. 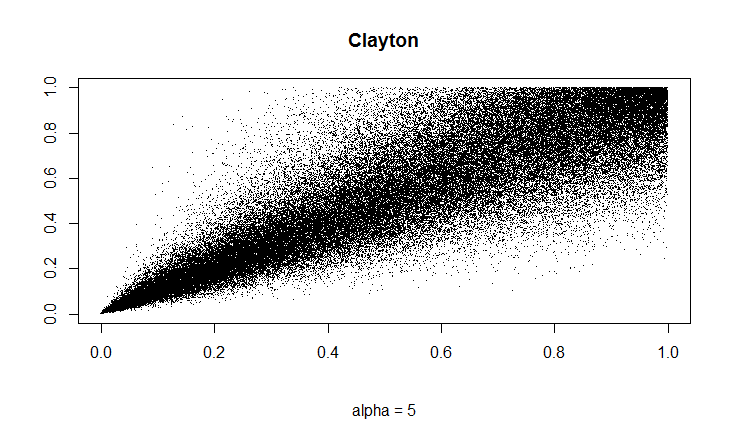 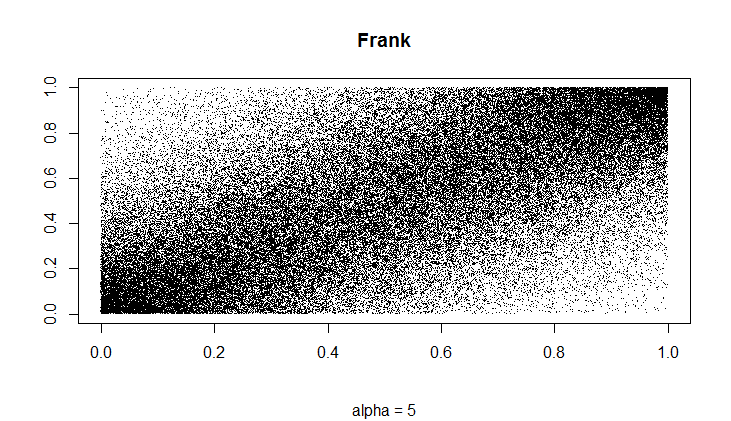 The Clayton has left-tail dependance. That means, as you het further to the left-tail (smaller values), the variables become more correlated. The Frank (and Gaussian for that matter) is symmetric. If the correlation is 0.45, it is 0.45 throught the entire span of the distribution.

Economic systems tend to exhibit tail dependence. For example, take reinsurer credit risk. When overall losses are normal, whether reinsurer A or reinsurer B will default on their payments to an insurer may look uncorrelated, or very weakly correlated. Now imagine that a string of casualties happened (like Hurricanes Rita, Wilma, Ida, etc.). Now the entire market is being hit one after the other with huge requests for payments, which can lead to a liquidity issue that many reinsurers will face due to the scope of the problem and simultaneous demands of their insureds. Their ability to pay is much more correlated now. This is an example in which a copula with right-tailed depedence is called for.

Tail dependence, at least as I understand it, explained to someone of limited stats background.

Imagine you have two variables, X and Y. With 100,000 observations of each. The observations are tied together in a sense. Maybe they've been generated using a copula or you happen to have the return values of two strongly correlated stocks over the course of 100,000 time periods.

The actual number of observations is likely to higher than 10 when the values for X and Y are not independent in the tails, this is what we call tail dependence.

Not the answer you're looking for? Browse other questions tagged fat-tails or ask your own question.