So from my understanding, the hazard rate is not a probability but a rate of an event happening at any one period of time. Can someone please tell me the implications of a hazard rate value. Would anyone be able to provide a question that is possible to only answer with the hazard rate?

And would anyone please verify the following: the hazard rate is simply the pdf of some point in time in the future assuming the get to that point in time

Don't think of hazard as a density function. It is an arrival rate, a probability per unit time. 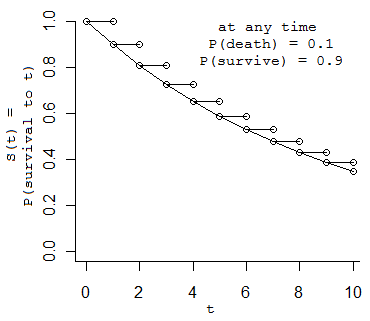 Rather than multiplying everything, you can add their logs, and the log of 1-P is just -P, if P is small enough. You can make it small enough by shortening the intervals.

Notice that hazard $h$ does not have to be constant over time. You can replace $h t$ by its time-integral, and you still get a correct survival function.

Thinking of it as a conditional probability tree makes it really easy (for me) to understand things like right-censoring, interval-censoring, etc.

Not the answer you're looking for? Browse other questions tagged hazard function or ask your own question.

5
It it possible in R to specify a regression formula for the hazard rate for a survival analysis model?
3
What is a hazard rate?
2
Intuitive meaning of the limit of the hazard rate of a gamma distribution
9
Understanding Hazard Function Values Exceeding 1
17
Intuition behind the hazard rate
5
Must the hazard function integrate to infinity?
5
Non-parametric (smoothed) estimate of current rate
0
Understanding hazard, hazard rates, and the Kaplan Meier Estimate using a simple example