How to visualize iterative parameter constraint?

I have conducted an analysis in which I start with a set of informed prior parameter distributions, and then conduct sequential analyses that constrain the distributions with data.

I am currently using density plots to visualize these results, but I am wondering how I can most effectively convey the process of parameter constraint to a non-bayesian audience.

Is there a more effective way to visualize the sequential constraint of parameter uncertainty?

I have included two parameters here, although I will actually be plotting between six and fifteen.

My current approach is along the lines of plotting the densities increasingly dark grey to black:

These figures are from the above example code:

Here is some of the actual data, with the x-axis scaled to focus on posteriors rather than priors, but at this scale the priors, despite being informed, look fairly flat. (These figures also illustrate that the posteriors are from mcmc chains rather than standard densities as in the example above).

One option would be to use color to show the progression, specifically by highlighting the final result in red - inspired by sparklines, including those on p. 51 of Beautiful Evidence. 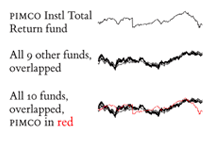 Translation as a probability distribution:

Tufte might suggest reducing the height to make the posterior angles approach 45 degrees.

Personally, I kind of like the facet_grid() from ggplot for showing how elements change over different experiments - especially if there's a visually noticeable progression. Here's an example using some of your numbers:

Another possibility is animating the graphics building one on top of the other. This is really just for shits and giggles though, not sure how it would fly for a stats heavy crowd or on paper...

Not the answer you're looking for? Browse other questions tagged r data-visualization probability bayesian or ask your own question.