oaxaca decomposition: how to treat error term and do intercrossing intercepts matter

I am just wondering if I can decompose a difference in earnings let's say between year 1999 and 2002 into the difference due to a higher education level of labour market participants and due to higher wage premium they get for their education in 2002 using Oaxaca decomposition.

According to my simple regression model: log (w) = α + β*number of years of education + ε there are different education premia:

I understand it is the log wage difference that matters here:

If I subtract the regression equation of 1999 from the one of 2002 & I transform the equations I arrive at:

The difference due to observable characteristics (different means in the years of schooling) reads as:

The difference in coefficients is:

My model explains below 20% of the variance. Am I right to understand there is no way to calculate the difference due to the changing coefficients? Is there any way to transform the equation further? 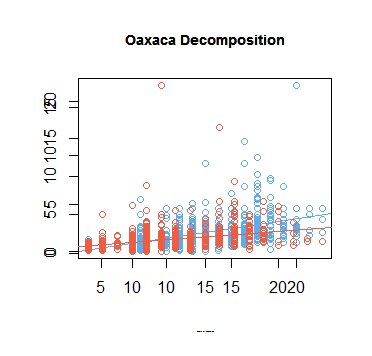 After running the regression, one knows the coefficients and intercept and the means of years of schooling for each year are already calculated, as well as one can do so for log hourly wages. Hence, the left hand-side of equations can be easily calculated to know each effect. After plugging in the known variables into the right hand-side of equations, everything left is the error term or unexplained difference.

Regarding the intercepts, Jann suggests they should be included in the unexplained part here: http://www.stata-journal.com/article.html?article=st0151 on p. 461, so if they cross or not does not matter.

4
Standardized mean decomposition (Oaxaca-Blinder decomposition)
2
Heteroskedasticity-consistent Standard Errors for Difference Between Two Populations?
6
Which is the dimension (or units) of the predicted random effects?
2
Interpreting effects of linear model