How seriously should I consider the effects of multicollinearity in my regression model?

I have a model y ~ x + z and the correlation between x and z is 0.2. This is only weakly positive. So, how seriously should I consider the effects of multicollinearity? Is it worth expressing a simpler model like y ~ x?

On the other hand, most people do not restrict multicollinearity to perfect linear dependence. If the multicollinearity isn't perfect (which in your case simply means the correlation isn't perfect, since you have only two variables), then there will be a unique solution and the model can be fit. However, if you were to draw a new sample and re-run your study identically, you would find that the beta estimates vary more widely than you might otherwise suspect. The sampling distributions of your betas remain unbiased (meaning that they are centered on the true value), but the width (i.e., the standard error) expands. In simple cases like yours, it is easy to calculate how much the variance expands. Specifically, you can calculate the variance inflation factor:
$$ {\rm VIF} = \frac{1}{1-r_{xz}^2} $$ In addition, if $x$ and $z$ are correlated, the bivariate sampling distribution of $\hat\beta_x$ and $\hat\beta_z$ will have non-zero covariance. Furthermore, the more strongly $x$ and $z$ are correlated, the larger the covariance. This point is less well-known, however, and typically is not what people are primarily concerned about.

In your specific case, the variances of the sampling deviations of your betas (both of them) will be $1.04$ times as wide (i.e., the standard errors will be $1.02$ times as wide) as they would have been if $r_{xz} = 0.\bar0$ and everything else about your study (e.g., $N$) were the same. It strikes me as very unlikely that you would need to worry about this (although strictly speaking, I don't know). So in answer to your explicit question, I would not worry about multicollinearity in your case, and would not try a simpler model.

This is just about all there is to say about multicollinearity—the alpha and the psy, as it were; it is what should be said about multicollinearity in the abstract / without knowing a lot of details about a particular study. For the sake of clarity, let me explicitly state some additional things, lest they be left ambiguous by dint of omission.

Because of the existence of multicollinearity, your model will / will not have sufficient predictive utility.

Your coefficients will not be sufficiently reliable.

Your variables will be non-significant.

The interpretation of the coefficients that would normally hold in a multiple regression model does not apply, or is invalid or problematic, when there is multicollinearity.

The interpretation of a coefficient in a multiple regression model is the change in $Y$ associated with a one-unit change in $X_i$ holding all else equal (there is more information here, if needed). This can remain true even when there are substantial correlations amongst the $X$ variables. Consider that, in the following plot, $x_1$ and $x_2$ are correlated $r_{x_1x_2} = .99$ and yet there are many cases where $x_1$ differs in value but $x_2$ is constant: 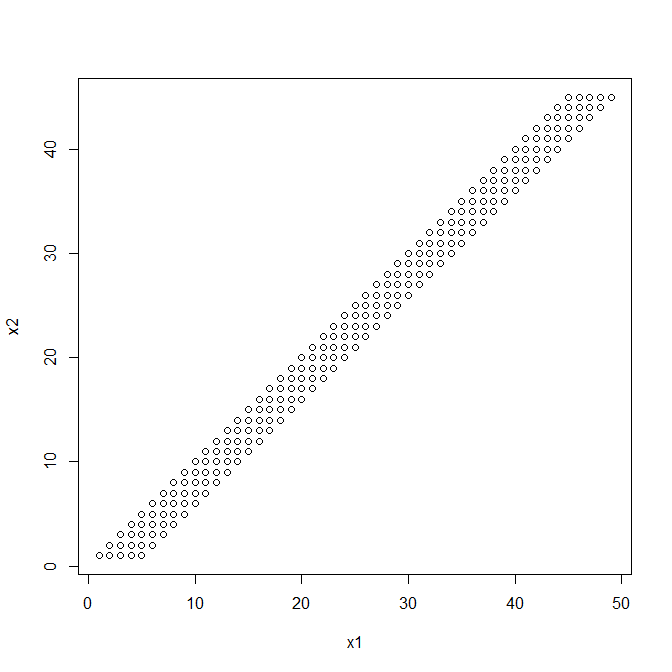 To understand this more clearly, it may help to contrast it with some well-known cases where the standard interpretation above is invalid or problematic. Consider the coefficient for $X_i$ when there is an interaction term including $X_i$, say $X_iX_j$. In that case, there is no such thing as "a one-unit change in $X_i$ holding all else equal", as it cannot be guaranteed that the interaction term can be held equal. Hence, the coefficient for $X_i$ turns out to be the change in $Y$ associated with a one-unit change in $X_i$ when $X_j=0$ (and all other variables are held equal). Similarly, if there is an $X_i^2$ term in the model, it cannot be held equal when $X_i$ changes. Although I have argued that it is best to interpret all polynomial terms involving the variable together, the coefficient on $X_i$ is related to the location in $X_i$ of the global extremum of the parabola. The point of these contrasting examples is that multicollinearity is not necessarily like this. As the figure above shows, there is nothing about the existence of multicollinearity that necessitates it being impossible for $X_i$ to vary while $X_j$ is constant, and so the standard interpretation of the coefficients remains generally valid / tenable. (Note, however, that interaction terms and squared terms typically induce multicollinearity, so there can be situations with multicollinearity where the normal interpretation does not apply.) 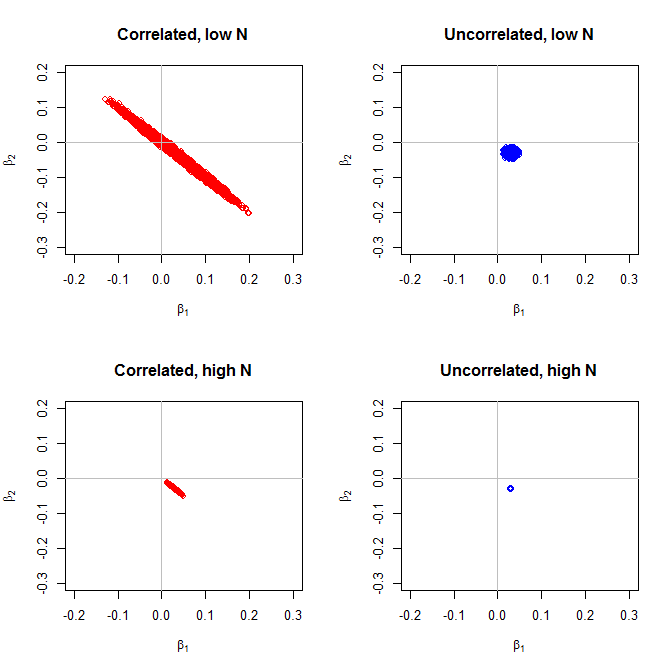 Not the answer you're looking for? Browse other questions tagged correlation multiple-regression multicollinearity or ask your own question.

63
Does it make sense to add a quadratic term but not the linear term to a model?
25
What does “all else equal” mean in multiple regression?
5
Why one result is so wide in this logistic multiple regession
2
When 2 variables are highly correlated can one be significant and the other not in a regression?
1
Multicollinearity in Auto Regressive models
1
Multicollinearity? Non-significant multiple-linear regression, highly correlated regressors but low variance inflation factor