i am trying to fit a simple kalman filter with input controls (in this case step input) in python. i am using filterpy (http://filterpy.readthedocs.org/). my code is: 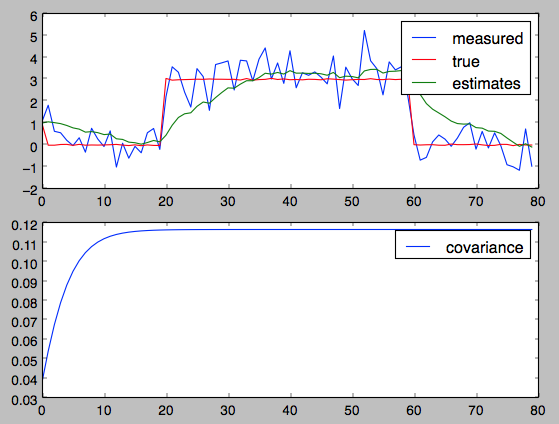 the filtering does not look right. i would have expected the covariance to go down with time, as filtering estimates should improve with time. what is wrong with this?

the filtering does not look right.

I agree. It's not clear to me what is going on with the filterpy filtering, but here is some information:

I'm not familiar with filterpy, and their documentation was not immediately helpful for me to see how they define the system and filter. But suppose that the generic linear system in question is:

The first iteration of the Kalman filter takes as inputs $a_0$ and $P_0$ (these have to be specified by the user) and provides as output the optimal estimates of $a_1$ and $P_1$.

You appear to be looking at the following case:

Since the noise components are so small, the filter should generally do a very good job estimating $a_t$ and $P_t$.

i would have expected the covariance to go down with time, as filtering estimates should improve with time. what is wrong with this?

This is not generally true. The covariance here is $P_t$, and in this case we would expect it to converge to the true value $0.02$. The problem with the picture you show is that it converges to just about $0.12$, not that it increases.

Whether or not it increases or decreases depends on what values are used to initialize the filter: $a_0$ and $P_0$. Here, you initialized the filter at the true values $(a_0=1, P_0=0.02)$, so if the filter is doing a good job, it shouldn't increase or decrease but should stay right around $0.02$.

One alternative (not necessarily better) is the Kalman filter that will be included in the next version (0.7) of Statsmodels (the code is in Github master right now). The emphasis in Statsmodels is parameter estimation (so that filtering is typically performed across an entire dataset rather than one observation at a time) and the Kalman filter is defined slightly differently (it uses an alternate timing of the transition equation: $x_{t+1} = u_t + T x_t + \eta_t$ - you can see the effect of this timing difference in the way I defined the state_intercept, below).

That being said, here is some code to perform the filtering:

Resulting in the following figures: 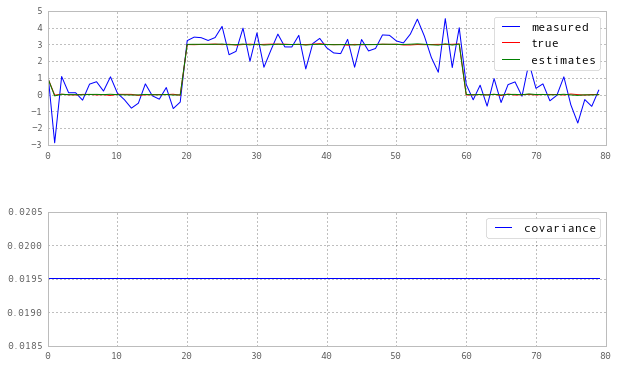 Getting back to the discussion of the variance increasing or decreasing: 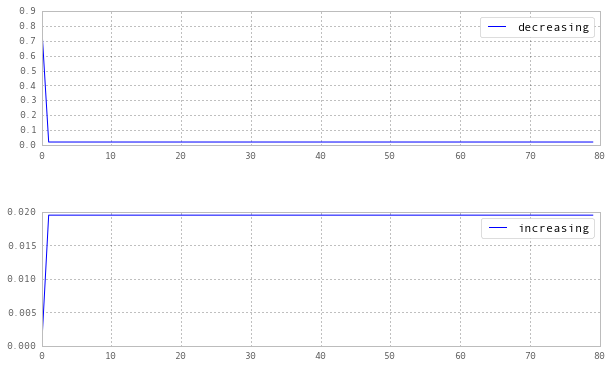 Not the answer you're looking for? Browse other questions tagged time-series bayesian python markov-process kalman-filter or ask your own question.