Unable to estimate standard error after freeing first indicator in SEM model - Why is it so?

I'm new to SEM + posting on this forum; do let me know if I'm being unclear in any way, and I'll do my best to clarify.

I'm working on a SEM assignment to estimate the fit of a model, with 6 indicators loading on to a latent variable. I'm using the following packages for the assignment:

My dataset is loaded into a dataframe named my.df

The model that I'm specifying is as follows - this model automatically fixes the first factor loading of GeneralMotivation to x1 to the value of 1.0:

I know there's no need to do so, but for the sake of better understanding how SEM works, I specified the following model as well, freeing the first indicator.

I then ran sem on the two models, as shown below:

When I specify the model using the default parameters on lavaan in my.model1, where the first indicator of the model is fixed to 1.0, there weren't any problems. The issue comes in problematicmy.model1, where I see the following error:

I've also attached the output for the offending model:

I've also attached the graphical model below for problematic.myfit1: 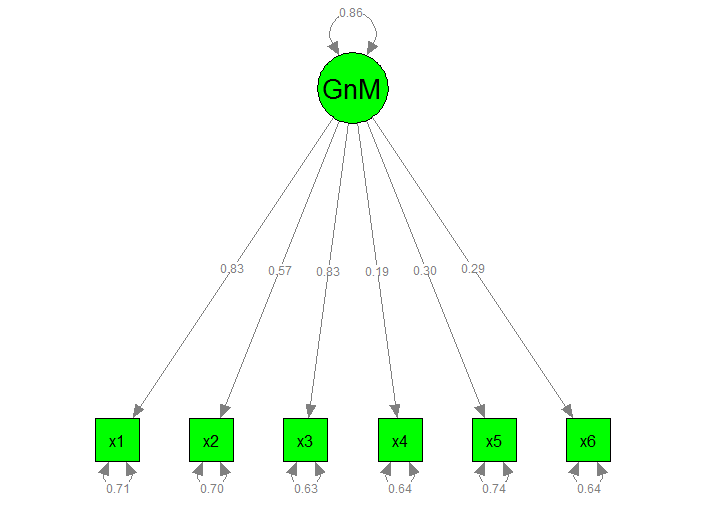 Steps taken to understand the error

I first thought "okay, maybe the model is underidentified", and calculated the pieces of information I have + the number of parameters to be estimated.

However, I cannot, for the p <.05 love of all things statistics, understand why the model is underidentified if I'm simply freeing the first indicator x1. From what I'm understanding, I'm only estimating a total of 13 parameters (6 residuals for the observed variables x1 to x6, 6 factor loadings, and the variance of the latent variable GeneralMotivation). Shouldn't my model be overidentified in this case?

My guess is that

Can anyone help me understand why the error from lavaan is popping up? Please let me know if you need more information from me.

As Maarten points out, your problem is that you have not set the scale of the second model. True, you have more observed variances/covariances than what you need to identify your model, but you still need to provide a point of reference from which other model parameters can be calculated (Brown, 2015).

You can set the scale using one of three methods:

Code for each approach (using the lavaan package's HolzingerSwineford1939 dataset) is presented below. The latent variable I've created is nonsensical/poor-fitting, but it has the same number of indicators as your model, so the example will hopefully be more transferable to your situation.

Which method you should use largely depends on the nature of your data and your research goals. The marker variable method is a highly arbitrary method of scale-setting. Like Maarten stated, your latent variables will take on the units of their respective marker variables, so this approach is only informative to the extent that your marker variables are especially meaningful, or perhaps represent some "gold standard" indicator of your latent construct.

The fixed factor method, alternatively, is easy to specify, and essentially standardizes your latent variables (if you're examining mean structures, you would fix the latent means to zero as well). Since we standardize variables all the time, this is a highly intuitive and widely acceptable form of scale-setting for latent variables, though the resultant scaling is not inherently meaningful. Even so, it's probably the best method to "default" to, unless you have a strong imperative to use one of the other methods.

Effects-coding is a relative new-comer to methods of scale-setting (see Little, Slegers, & Card, 2006, for a thorough discussion). It's greatest advantage is when you are modeling latent means. When doing so, you would also constrain item intercepts to average 0. The effect of these constraints is that your latent variables will be on the exact same scale as your original items. For example, if the average of your indicators was "5", your latent mean would also be "5", though your latent variance would be smaller than you observed variance. Because the constraints on the loadings and intercepts can be more computationally demanding, especially in more complicated models, and occasionally result in convergence errors, effects-coding is probably not worth it unless you plan to examine latent means. But for the particular purpose of examining latent means, it's great.

Think of the scale of GnM. It is latent so it does not have a natural scale like meters (inches), euros (yen), etc. Instead we need to give it a scale by telling it when it is 0 and what a unit of increase is. In your original model you set GnM to 0 when all the indicators are 0, and by setting the loading of x1 to 1, you are borowing the unit from x1. So a unit increase in GnM is equivalent to a unit increase in x1. When you set the loading of x1 free, what is the unit of GnM? We don't know, so it is unidentified. A common way to solve that is to set the variance of GnM to 1.

Not the answer you're looking for? Browse other questions tagged structural-equation-modeling or ask your own question.

3
Why is SEM/CFA failing to find the correct factors in this simple set up? Possible error in 'predict'?
9
What is an intuitive definition/explanation of an intercept in SEM?
0
Correct Estimator for Path Analysis/SEM Using Categorical Covariate
1
Chi Squared Fit Statistic in Structural Equation Models
0
How to estimate correlations between weighted composites of observed variables from correlation matrix using lavaan?