I've been set a sample exercise by my supervisor, and I'm totally lost as to where I should be heading.

What I've been tasked with is to generate two histograms that approximate Gaussian PDFs. Then, I'm meant to shift the means of the histograms so that they overlap to some extent, and then calculate the drop in mutual information.

I've tried a variety of solutions, but none have given me reliable results so far. What I'm now trying to do is calculate the entropy of each of the histograms, and subtract the entropy of the joint histogram. However, even this is becoming difficult.

From my (albeit limited) understanding of information theory, the above should have calculated the information "contained" within the first and second histograms, and summed them. I would expect a value of 1 for this sum, and I do indeed achieve this value. However, what I'm stuck on now is determining the joint histogram, and following from that, the joint entropy to subtract.

Is the prob2D matrix I've created the joint probability?? If so, how can I use this?? Any insight or links to relevant papers would be much appreciated - I've been googling quite a bit, but I haven't been able to turn up anything of value.

If I pick up your code from this:

We can solve this the following way:

I12 for the random variables that you generate, is quite low (~0.01), which is not surprising, since you generate them independently. Plotting the independence assumed distribution and the joint distribution side by side shows how similar they are: 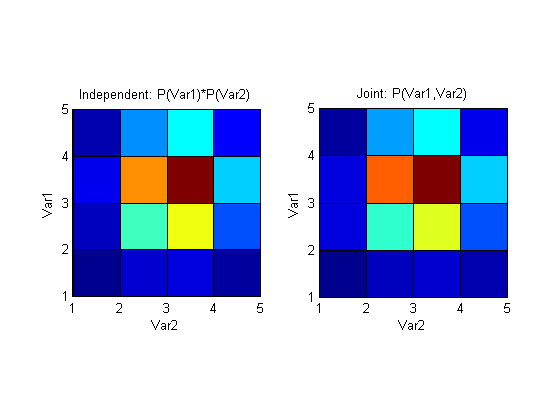 If, on the other hand, we introduce dependence by generating randpoints2 to have some component of randpoints1, like this for example:

I12 becomes much larger (~0.25) and represents the larger mutual information that these variables now share. Plotting the above distributions again shows a clear (would be clearer with more points and bins of course) difference between joint pmf that assumes independence and a pmf that's generated by sampling the variables simultaneously. 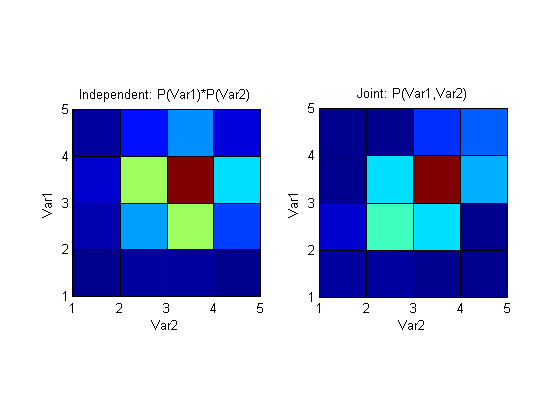 A blog post entitled, “Entropy in machine learning” dated May 6, 2019 (https://amethix.com/entropy-in-machine-learning/) gave a very good explanation and summary of the concepts of Mutual Information, KL Divergence and their relationships to Entropy. It had many informative references and it provided useful Python code supporting their explanations. The code that they provided used the numpy.histogram method to create the inputs for the sklearn.metrics. mutual_info_score while never displaying the actual histograms. You can very easily modify it to display the histograms that you need then use the MI as needed. The code and references that they provided as also very enlighting. You might also benefit from their explanation and use of code to calculate KL Divergence.

I find this post, along with the explanation and code provided in the first answer above when combined, to offer a very interesting solution.

Not the answer you're looking for? Browse other questions tagged matlab histogram information-theory mutual-information or ask your own question.